This is a middle ground between RDSH on Windows Server and VDI on Windows 10.

The presentation is actually being run from a WVD VM in the cloud. PowerPoint is a published application – we can see the little glyph in the taskbar icon.

With 100 users in a machine signing in simultaneously, enabling Windows Search has a 0.02% impact on the CPU.

Desktop of the remote machine is stretched across multiple displays – this demo is with a published desktop hosted in Windows 10 multi-user. Windows Desktop search is enabled. Instant search results in Outlook. OneDrive sync is working in a non-persistent machine – fully functional enabling the full collaboration experience in O365. Selective Sync works here too. Sync is cloud-cloud so the performance is awesome. In Task Manager, we see 3 users signed into a single Windows 10 VM via RDS.

Widows 10 Multi User is only available in Azure via Windows Virtual Desktop.

A lot of the above optimization, such as search indexing, rely on the user having a persistent profile on the latest version of Windows 10. So if that profile is a roaming profile or a UPD, then this works, in RDS or on physical, 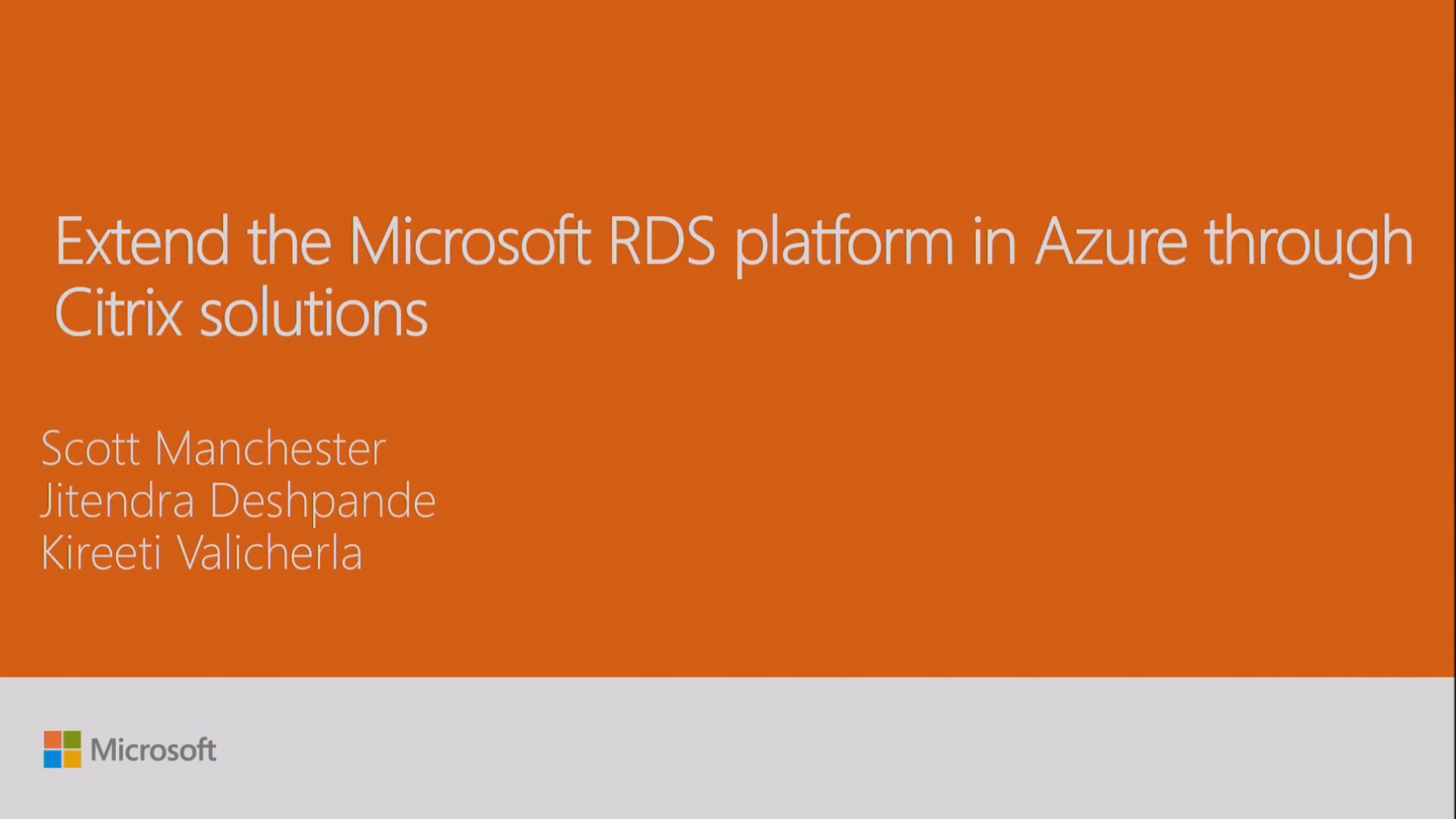 This post is my set of notes from the session that shows us how Citrix are extending Azure functionality, including the 1st public demo of Citrix Express, which will replace Azure RemoteApp in 2017.

A MSFT-only solution with multiple goals: 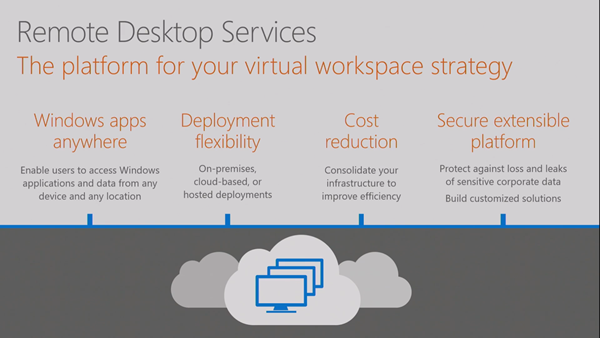 There are a set of VMs that are ideal for graphics intensive RDS/Citrix workloads. They use physical NVIDIA GPUs that are presented to the VM directly using Hyper-V DDA (as in WS2016 Hyper-V).

I skip some of the other stuff that is covered in other sessions.

Kiritee from Citrix XenApp/XenDesktop takes the stage. He’s focused on XenApp Express, a new from-Azure service that will be out in 2017.

Jitendra of Citrix takes over. He works on XenApp cloud and XenApp Express. 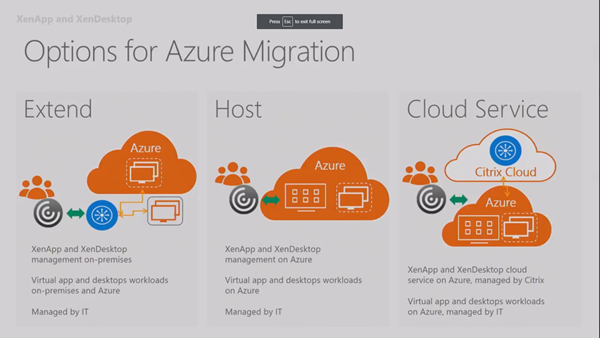 You can extend workloads to Azure, host workloads in Azure, or  run on a Citrix-managed service in Azure. In the latter, the management is in Citrix, and your workload runs in Azure. Citrix seamlessly update the management pieces and you just use them without doing upgrades.

These are the Citrix/Azure offerings today and in the future: 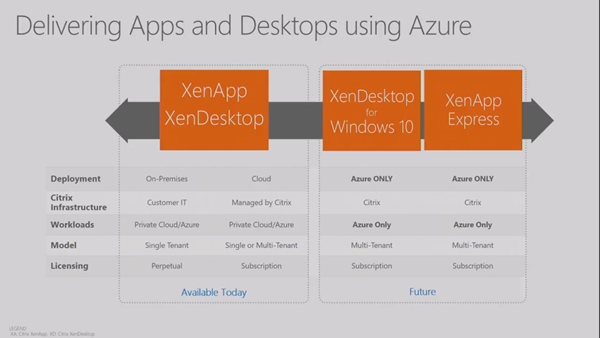 Next Generation Service for Remoting Apps

XenApp Express, out of the Azure Marketplace, will be the successor to Azure RemoteApp. 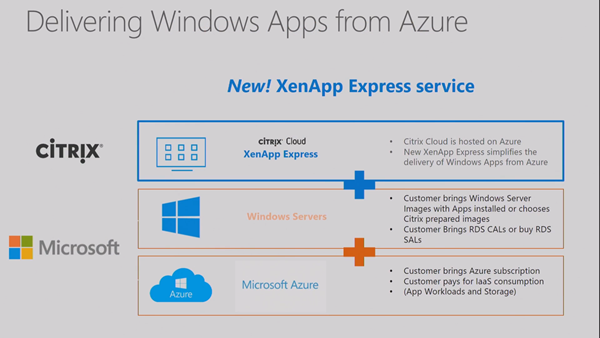 Citrix Cloud will provide the management – it’s actually hosted on Azure. You bring your own Windows Server Images into XenApp Express, much like we do with Azure RemoteApp – it an image with the apps pre-installed.

Bad news: The customer must have RDS CALs with Software Assurance (Volume Licensing, and yes, SA is required for cloud usage) or RDS SALs (SPLA). The cost of Azure Remote included the monthly cost of RDS licensing.

The VMs that are deployed are run in your Azure subscription and consume credit/billing there.

Management is done via another portal in Citrix Cloud. Yes, you’ll need to use Azure Portal and the Citrix Cloud portal. 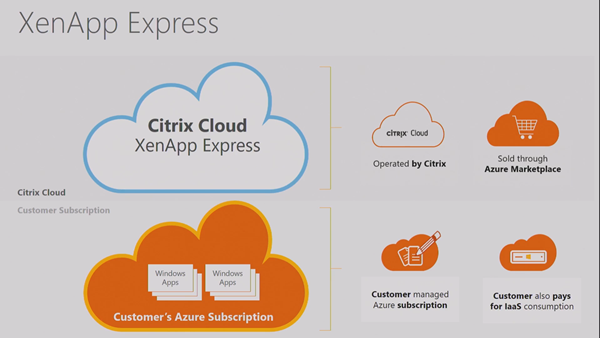 Here is the release timeline. A technical preview will be some time in Q4 of this year. 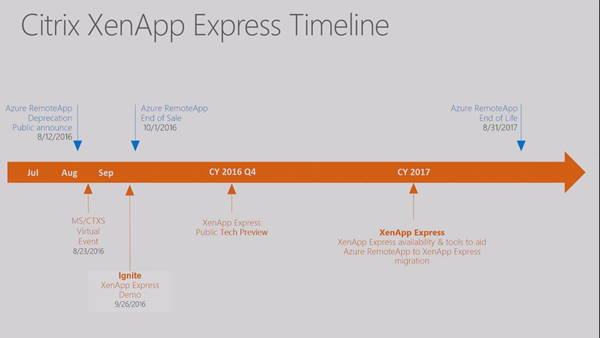 Next up, a demo, by Jitendra (I think – we cannot see the presenters in the video). The demo is with a dev build, which will likely change before the tech preview is launched.

The Best Way To Deliver Windows 10 Desktop From The Cloud

There are “new licensing changes” to move Windows 10 workloads to Azure. Citrix XenDesktop will be based on this. 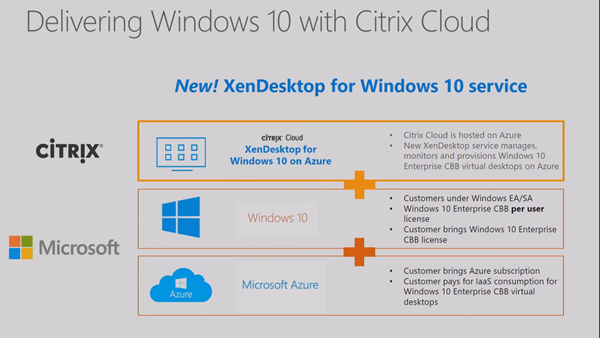 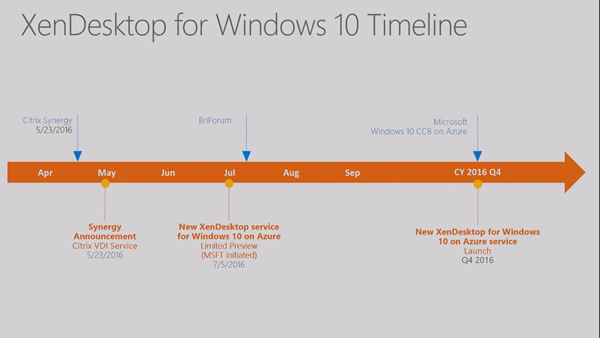 It’s been a slow period but there’s some interesting stuff in Azure networking and websites.

There’s a new craze out there with famous people called the Ice Bucket Challenge. A person is dared to take a bucket of ice water over the head (and post the video online) or donate to charity, in in of of “raising awareness” of a disease called ALS. Nadella and Zuckerberg have done it. Gates has been challenged.

I’ve been asked about resource requirements for the dedupe optimization job before but I did not have the answer before now.

The CPU side is … not clear.  The dedupe subsystem will schedule one single-threaded job per volume. That means a machine with 8 logical processors is only 1/8th utilized if there is a single data volume. Microsoft says:

To achieve optimal throughput, consider configuring multiple deduplication volumes, up to the number of CPU cores on the file server.

That seems pretty dumb to me. “Go ahead and complicate volume management to optimize the dedupe processing”. Uhhhhh, no thanks.

Microsoft tells us that 1-2 GB RAM is used per 1 TB of data per volume.  They clarify this with an example:

There is an additional note from Microsoft:

Machines where very large amount of data change between optimization job is expected may require even up to 3 GB of RAM per 1 TB of diskspace.

So you might see RAM become a bottleneck or increase pressure (in a VM with Dynamic Memory) if the optimization job hasn’t run in a while or if lots of data is dumped into a deduped volume.  Example: you have deployed lots of new personal (dedicated) VMs for new users on a deduped volume.

I’m viewing WS2012 R2 as a storage release by Microsoft (WS2012 was a Hyper-V/cloud release).  There’s a lot happening in the storage side of WS2012 R2, and Microsoft has published a bunch of posts to keep you informed.

This isn’t exactly a Hyper-V issue (it’s RDS) but Hyper-V is running on the affected WS2012 hosts.

In this scenario, you cannot log on to the virtual machine. The logon screen appears but the logon process cannot be completed.
Notes