It looks like you will have to use the latest version of IE to be supported after January 2016. That’ll go down like the Hindenburg in businesses.

Very little happening. These quiet times are great for rumours.

And here’s the news from over the weekend:

I’m in an IE hating kind of mood this week. For no reason, IE11 decided to die on my new laptop on Thursday. That’s forced me back into the hands of Google (I find Firefox to be the worst to use of the 3 big browsers).

What’s happening? When I open IE11 it comes up with “Your last browsing session closed unexpectedly”. And then it locks up. I’ve reset IE and I’ve deleted all items. I’ve disabled all plugins and no joy.

One thing I found was interesting: I reset the home page to the default. IE opens just fine then. But try to browse to a page and it freezes before the page can load. It’s as if the rendering of the page is causing the issue.

A nice suggestion I got via twitter from Tero Alhonen was to:

Why try this? Because a new test user on the same machine has no issues.

I have also tried removing and recreating my user. That, in my opinion, is going too far to fix this issue, and although I could go to some extremes down this path, I am not willing to do so. Why the frak should I? A browser should just damned well work.

BTW, I have found plenty of people on forums having the same issue for months. A few seem to have resolved their issue by installing a new NVIDIA graphics driver. My Yoga’s devices are up to date and it has a Intel HD graphics.

So IE11 is now dead (literally) to me. And MSFT wonders why Win8x isn’t doing well ….

A quick update. Most sites will not load, e.g. Bing or Google. Some (a very few) load slowly, e.g. independent.ie. This leads me to think that there is a rendering issue in IE11 that is specific to my user profile, and was synced in via Skydrive.

Tero came back to me with another idea. Disable GPU rendering in the advanced IE settings. I opened up Internet Options in Control Panel and checked Use Software Rendering Instead Of GPU Rendering. I started up IE and pages are opening as expected. Thanks Tero! 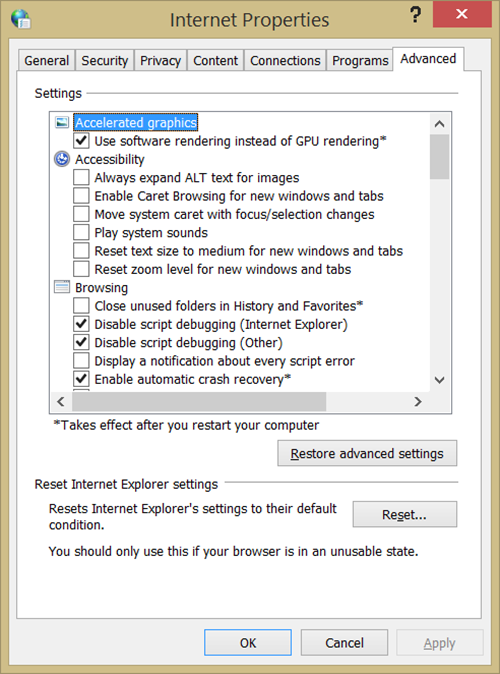 I’ve not seen the Browser Chooser yet on my Enterprise installations of Windows 8, but it popped up today on the Windows 8 (home) demo machines we got at work last week.  The first screen (below) tells me that I have an important, possibly life altering, choice to make.

I’m then presented with my options.  IE10 was the 4th choice both times. 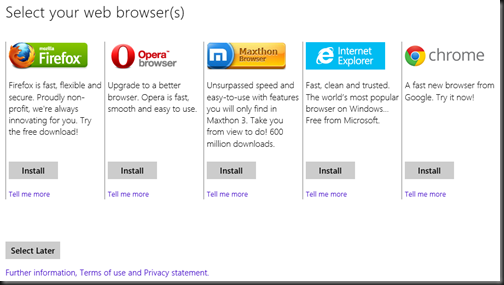 You might not notice it, but you can scroll the list of possible browsers to get something different to the first 5: 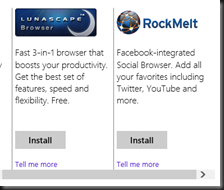 I’ve never heard of most of those browsers.  What the hell is a FireFox? Didn’t Clint Eastwood steal that from the USSR for President Reagan to bomb furniture stores?

I picked IE10 and was rewarded with some congratulations: 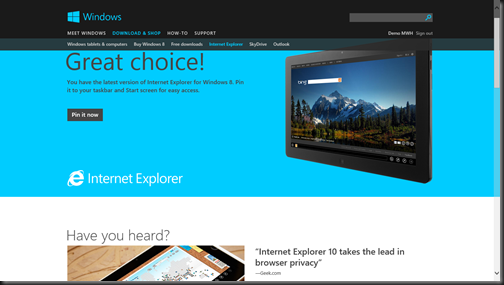 You might have heard that the EU is upset with Microsoft because the Browser Chooser that MSFT agreed would be included in Windows 7 for European Union customers was not active in Windows 7 SP1.  Strangely enough, I (a Chrome browser user) noticed this in my last few builds.

The EU forced Microsoft into introducing the Browser Chooser in Windows 7 for local markets.  This would prevent Microsoft from abusing a then monopoly position and enable other browsers to enter the market.  Fair enough I thought, and it worked well.  When you logged into a new PC, you could pick your default browser.  Some joked that IE was the browser you used to download your preferred browser.

Then the news broke this week that the EU is investigating an issue where this browser chooser was not working in Windows 7 SP1.  And further, the EU could fine Microsoft up to 10% of their earnings over the 18 or so months period: $7 or $8 billion!

Interesting, because although IE still leads worldwide, I’d been hearing over the months that IE had lost the top position in Europe.  What do the stats say?

According to StatCounter, IE is #3 in Europe: 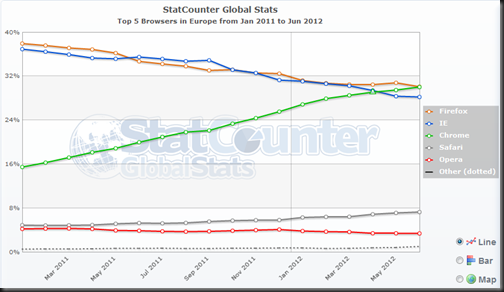 According to GetClicky. IE has continued to decline globally, despite the lack of the browser chooser: 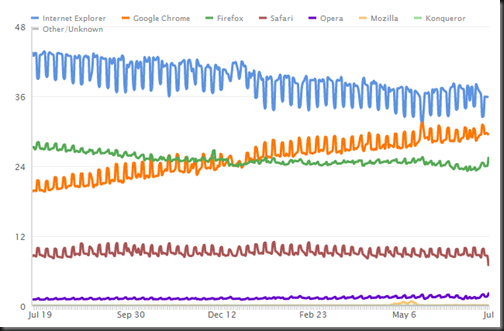 According to W3Counter, IE also continues to decline globally, despite the lack of a browser chooser: 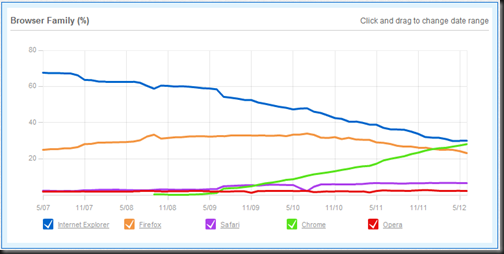 In other words, with a browser chooser or not, IE continues to lose market share even if Microsoft owns some 95% of the “PC” market.  We could question Microsoft’s monopoly position (IDC reckon they’ll sell 350 million PCs in 2012) too: Apple have 4% or so of the “PC” market, are set to sell 116 million iPhones ad 54 million iPads, almost exclusively using Safari.

Do we really need a Browser Chooser on Windows?  People have figured out what browser they want and IE is sliding.

And where is the EU mandated chooser for IOS devices?

It will be interesting to see what happens with Windows RT where IE and Office run on the desktop and no other programs can be installed there.  I wonder if the decision to include the limited desktop at all in Windows RT will backfire?  But that’s a whole other story and the lawyers/Eurocrats will decide that one (I’m not saying that this is good at all).

It was announced this week at Build Windows that IE10 in the Windows 8 Metro UI would not support any plugins.  The goal is to eliminate common performance and security flaws, e.g. Adobe Flash in being increasingly viewed (at least by me) as a vulnerable attack vector that doesn’t get updated quite as well as it should.  This ban effects Flash, ActiveX, etc.

Note: IE10 via the desktop does still support plugins.

I paid little attention to this story until last night when a couple of developers I was spending time with expressed how they felt.  They were not happy; not one little bit.  One of them had made great investment in a SaaS cloud product that was based on one or more plugins.  Their work, if nothing changes with IE10 for Metro, will have been for naught because they will have to convert everything to HTML5.  I don’t know what the toolset is like so I am not sure about how easy/difficult such a porting operation would be.

This morning I was lucky to sit down for breakfast with two other developers who I had met the previous morning at breakfast.  I asked them what they thought.  Firstly, they hadn’t heard the news.  They made some very interesting points:

I’m sure this one will boil up slowly over the coming 6-12 months.  Maybe when launch happens, Metro UI will be ignored because of this, and users will focus on IE10 for the desktop.  Maybe legacy business apps that use God-knows-what will be an issue – let’s remember that IE6 is still widely used on XP because of them!

Just as you’ve gotten Internet Explorer 9 and/or FireFox 4 installed, news has hit the wires of their successors.

Mozilla have confirmed that you can expect FireFox 5 in the Summer and FireFox 6 just a few months after that.

Paul Thurrot just tweeted (and there have been other news sources too) that a technical preview release (link is dead at the moment) of IE10 would be shown at the MIX (developers) conference today.

I’ve encountered sites and applications that don’t work with one or both of these browsers.  Normally I’d think “the app vendor will catch up soon enough”.  But now?  Why would they bother?  With major new releases with the ever present new features (AKA “standards”) breaking existing apps, a web app publisher is probably going to sit on one browser version for ages, before updating their application to a later version.  We might end up in Java hell – anyone been in that painful place where you had to maintain 4 or 5 versions of Java in your desktop “standard”.  It was hell for the helpdesk/desktop management teams.

In an era of cloud computing where the browser becomes the most important tool, I can understand frequent releases.  But surely these should be minor releases, fixing bugs, improving performance, and so on?  Worried about app compat for Windows?  In a world where the likes of Google and Microsoft want you consuming their SaaS apps via the browser, you might be in for a world of hurt pretty soon if every SaaS publisher works to different versions.

It remains to be seen what Mozilla and Microsoft have in store for us.  My bet is that, based on this news, a lot of organisations will choose to skip IE9 and FireFox 4, waiting for the next versions to come along.