In this post, I will explain the types of resources used in Azure Virtual WAN and the nature of their relationships.

As you can see – there are quite a few resources involved … and some that you won’t see listed at all because of the “appliance-like” nature of the deployment. I have not included any detail on spokes or “branch offices”, which would require further resources. The below diagram is enough to get a hub operational and connected to on-premises locations and spoke virtual networks. 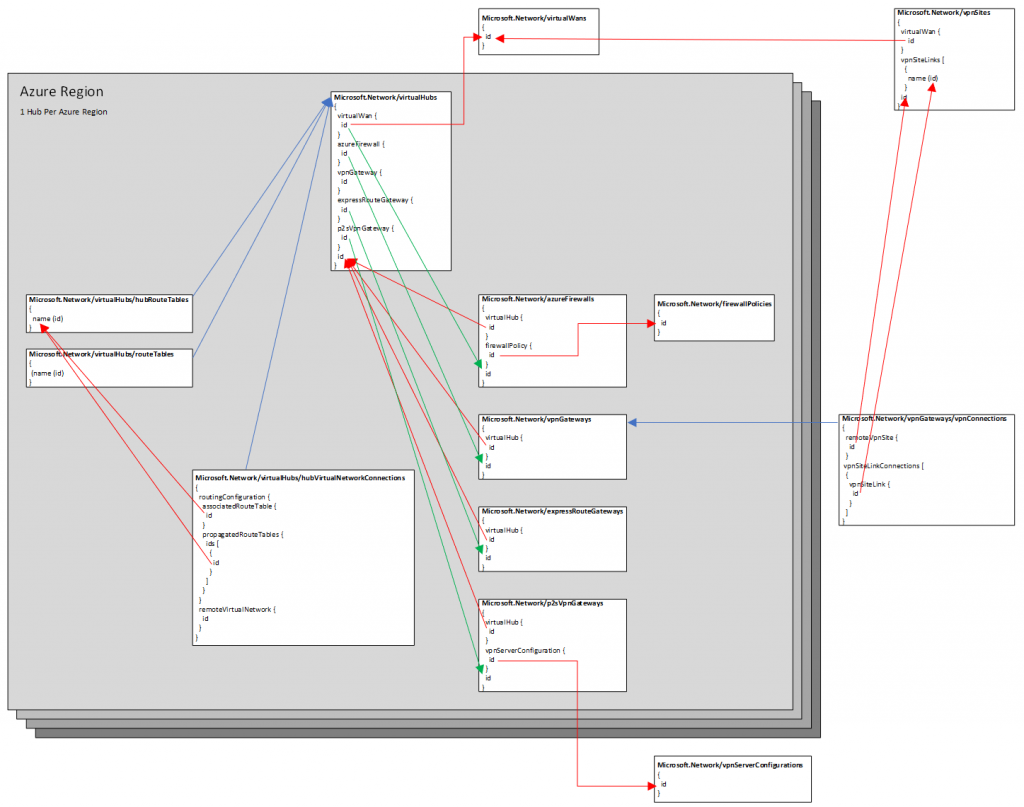 You need at least one Virtual WAN to be deployed. This is what the hub will connect to, and you can connect many hubs to a common Virtual WAN to get automated any-to-any connectivity across the Microsoft physical WAN.

Surprisingly, the resource is deployed to an Azure region and not as a global resource, such as other global resources such as Traffic Manager or Azure DNS.

Also known as the hub, the Virtual Hub is deployed once, and once only, per Azure region where you need a hub. This hub replaces the old hub virtual network (plus gateway(s), plus firewall, plus route tables) deployment you might be used to. The hub is deployed as a hidden resource, managed through the Virtual WAN in the Azure Portal or via scripting/ARM.

The hub is associated with the Virtual WAN through a virtualWAN property that references the resource ID of the virtualWans resource.

In a previous post, I referred to a chicken & egg scenario with the virtualHubs resource. The hub has properties that point to the resource IDs of each deployed gateway:

If you choose to deploy a “Secured Virtual Hub” there will also be a property called azureFirewall that will point to the resource ID of an Azure Firewall with the AZFW_Hub SKU.

These are resources that are used in custom routing, a recently announced as GA feature that won’t be live until August 3rd, according to the Azure Portal. The resource control the flows of traffic in your hub and spoke architecture. They are child-resources of the virtualHubs resource so no references of hub resource IDs are required.

This is an optional resource that is deployed when you want a “Secured Virtual Hub”. Today, this is the only way to put a firewall into the hub, although a new preview program should make it possible for third-parties to join the hub. Alternatively, you can use custom routing to force north-south and east-west traffic through an NVA that is running in a spoke, although that will double peering costs.

This is one of 3 ways (one, two or all three at once) that you can connect on-premises (branch) sites to the hub and your Azure deployment(s). This gateway provides you with site-to-site connectivity using VPN. The VPN Gateway uses a property called virtualHub to point at the resource ID of the associated hub or virtualHubs resource. This is a hidden resource.

Note that the virtualHubs resource must also point at the resource ID of the VPN gateway resource ID using a property called vpnGateway.

This is one of 3 ways (one, two or all three at once) that you can connect on-premises (branch) sites to the hub and your Azure deployment(s). This gateway provides you with site-to-site connectivity using ExpressRoute. The ExpressRoute Gateway uses a property called virtualHub to point at the resource ID of the associated hub or virtualHubs resource. This is a hidden resource.

Note that the virtualHubs resource must also point at the resource ID of the ExpressRoute gateway resource ID using a property called p2sGateway.

This is one of 3 ways (one, two or all three at once) that you can connect on-premises (branch) sites to the hub and your Azure deployment(s). This gateway provides users/devices with connectivity using VPN tunnels. The Point-to-Site Gateway uses a property called virtualHub to point at the resource ID of the associated hub or virtualHubs resource. This is a hidden resource.

Note that the virtualHubs resource must also point at the resource ID of the Point-to-Site gateway resource ID using a property called p2sVpnGateway.

The following resources were added on 22nd July 2020:

This resource has a similar purpose to a Local Network Gateway for site-to-site VPN connections; it describes the on-premises location, AKA “branch office”.  A VPN site can be associated with one or many hubs, so it is actually connected to the Virtual WAN resource ID using a property called virtualWan. This is a hidden resource.

The deployment is rather simple; you create a Virtual Network Connection in the hub specifying the resource ID of the spoke virtual network, using a property called remoteVirtualNetwork. The underlying resource provider will initiate both sides of the peering connection on your behalf – there is no deployment required in the spoke virtual network resource. The Virtual Network Connection will reference the Hub Route Tables in the hub to configure route association and propagation.

There are more resources that I’ve yet to document, including: 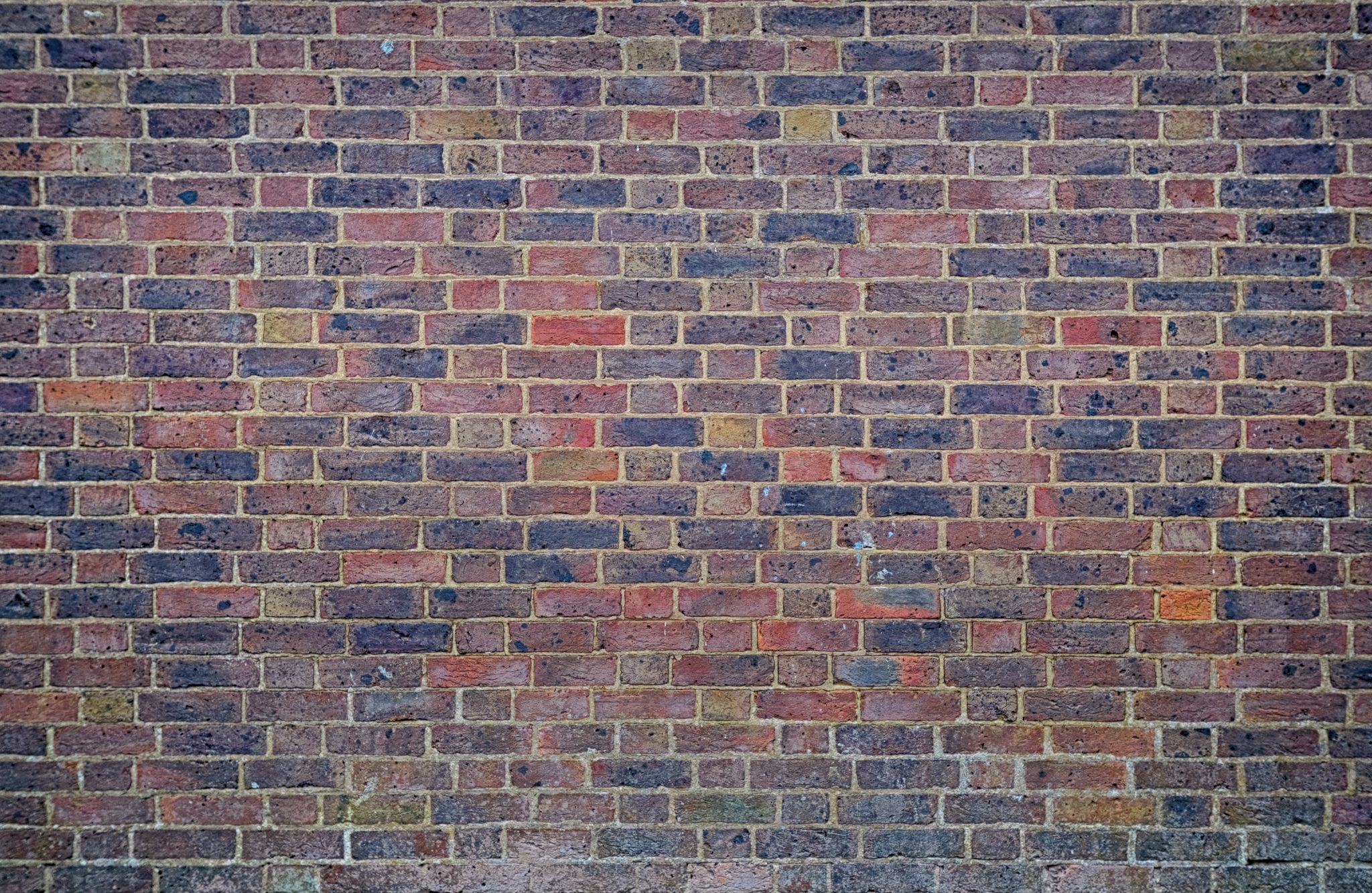