This is the one feature that is announced this week that I know for certain will turn into business for my customers so I’ve been looking forward to it finally going public.

Azure is a bunch of lego blogs that can be assembled to produce services. A keystone is Azure Storage. Hyperscale at >30 trillion transactions per second at the moment across trillions of objects. It’s durable, secure, highly available, and OpenSource friendly.

One distributed storage system system offers, blob, files, disks, tables and queues, across more regions than any other cloud.

Originally launched for lift-and-shift. If you had a legacy LOB app that needed a file share, you deployed Files instead of a VM file server. It was not intended for end user access. Offers SMB 2.1 and SMB 3.0. And if offers encryption at rest.

People still do not store things in the cloud. OneDrive and SharePoint online aren’t for everyone. Reasons:

They still want to use file servers, but they’re struggling:

Companies with branch offices have a multiplier effect of the above.

A customer with a file server and the disk storage is a problem. Join the file server to a sync group in Azure Files. Older (actually all) files are moved to the cloud (transparent tiering with “stubs” on prem). If you lose the file server, you build a new one, add it into the existing Files namespace, and the meta data is downloaded. That means users see the shares/data very quickly. Over time, hot data is downloaded as files are used.

You can add another file server and join it to the same sync group, or create more. This synchronizes the files between the file servers via Azure Files (the master now).

Coming soon, not in the current preview), you can synchronize Azure Files from one Azure region to another for DR/performance reasons. You can than hang servers close to that region off of that copy, with inter-region sync if you need it. If one region dies, the file servers associate with it fail over to the other region.

If you are using Work Folders (HTTPS access to file shares from Windows, iOS or Android) then this continues to work with the file server.

There is Azure Backup integration so you can backup your file shares in Azure without doing any backup at all on-prem. Killer!

He’s in the Azure Portal and searches for Azure File Sync. He clicks Create. Simple creation of entering name and resource group. Supports West US, Souteast Asia, East Australia, and West Europe today, but more will be added.

He’s already downloaded the MSI for the agent. Installs this on a file server. Today, you must installed Azure RM PowerShell but this will be folded into the agent install later. The file server is registered via an Azure sign-in. Then picks a subscription, picks a resource group, selects the Storage Sync Service. This requires another sign-in and a trust is created between the file server and Azure Files.

Back in the portal, he opens the sync service resource, and the file server is shown as Online, with OS version and agent version info.

He creates a sync group and associates it with a pre-created Azure File Share. There are no server endpoints – things we sync to the cloud from a file server, e.g. a path. You can synchronize multiples sets of folders, using sync endpoints as policy objects. You cannot sync the system root.

In the Azure File Share – Storage Account > Files – we can see the contents of the file share are now in Azure. He renames a file on the file server, and 2 seconds later it’s renamed in Azure.

Tiering takes time to quiesce. Attributes show if a file is offline (O) or in Azure. The icon also shows the file as being offline by being transparent.

Questions from the audience:

Back to demo. He added a blank server to the sync group with contents. Meta data of the share/files appears almost instantly. That’s “rapid restore” in action:

Customer: TSK that designs & fits out workplaces. They want as little on-prem IT as possible. Not a huge company. They had people in multiple locations with file servers, collaborating. They used Talon FAST in front of Azure Files, enabling sites to see a single share across sites. And this supports file locks in Azure Files, preventing the overwrite scenario.

Mine from Microsoft takes over.

She opens Files in a storage account. There are some shares. She shows that you can use Net Use or Sudo to connect to a file share over the network. She creates a snapshot. Then she views snapshots. Loads of them there already because Azure Backup is enabled. In the recovery services vault, she opens Backup Items. We can see shares in there. She adds another in the same Backup wizard as usual. A backup policy is selected.  We see that we can manually restore a share or a file. On a VM file server, she shows a mounted file share with files in it. She has also mounted a snapshot. Because of this method, Previous Versions in the file share can be used to view/mount snapshots.

Retention up to 120 days. Storage costs are incremental. You pay per storage account being backed up. 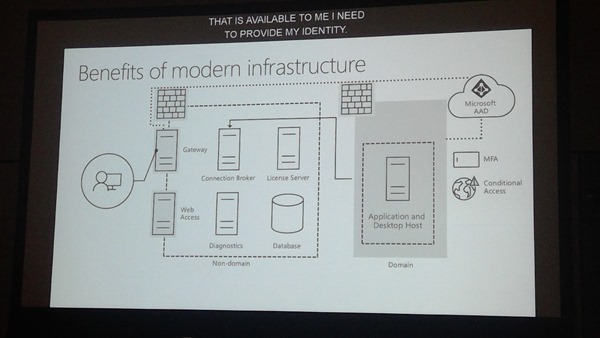