I have a lot of digital media scattered all over at home.  I’ve got documents (whitepapers and books), music, videos, and about 700 GB of photos (RAW, PSD, and JPEG), all of which are either on a laptop or a USB disk.  I have tried to backup but it’s a painful, time consuming process.  I have Live Mesh and volume shadow copy up an running but that’s no solution.

Last week I bought a HP Microserver with the intention of running it as a home server.  It’s a low end machine, with a dual core AMD processor, and 1 GB (max 8 GB) RAM, with a 256 GB SATA drive.  I upgraded it with 2 * 2.5 TB Seagate “green” (low power) disks (removing the default 256 GB drive), and bumped up the memory by 4 GB.  It must be said that the chassis build is not great.  Getting the top cover off/on was a nightmare.  The board where the DIMMS sit can be seen in the following picture.  It’s at the bottom.  The sides do not come off, so you have to disconnect all those visible cables, undo 2 thumb screws, and wiggle the board out on the built-in slides.

The machine has a built in wired NIC.  My home network is wireless N.  I probably could have gotten a wifi NIC for the machine (2 * PCIe slots) but I decided to span my network using a Devolo 200 MB power over ethernet kit: 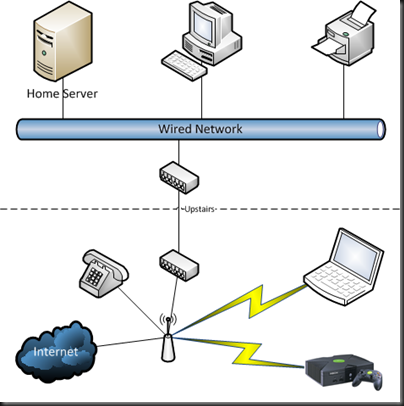 This allows my Xbox and laptop/netbook/iDevices to sit free on the wifi network.  Upstairs in my office (a box room) is where the Devolo breaks out 3 wired connections and that’s where the HP Microserver, a PC, and printers (photo and general purpose) can be found.  The entire wifi and wired network runs on the same subnet.

I decided to try out Windows Home Server 2011 as the operating system.  It’s intended to do what I need:

My first install was just a test.  The server’s storage controller was set by default to not have RAID enabled.  The result was that WHS 2011 was installed on disk 1 with a 60 GB C: drive, a 2 TB D: drive, and the remnants were unused.  This is where I realise that it backs up using Windows Server Backup to VHD.  The 2 TB volume limit is a result of the limit of a VHD.  Doh!  The disk is not RAIDed, so Disk 2 was partitioned up as well.  Not so useful.

So yesterday afternoon I had time to revisit.  I configured the server with RAID1 (wiping the contents of the disks) and reinstalled.  Or I tried to.  The install failed with the message being something like “the installation has failed.  Please see the log for details”.  The log told me the setup was starting and then it stopped.  Useless!  I Googled, re-RAIDed, I recreated the USB installer, and no joy.  Based on where the failure was (configuring Windows before the first reboot), it appears like the setup routine was trying to configure the boot environment and failing.

Eventually I tried installing on the 256 GB drive.  It worked.  OK – so the problem is RAID and/or the 2.5 TB drives.  I tried the following:

This left me with 2 choices:

The end result is that I have a 512 RAID 1 drive with the OS on it, and a share for videos.  The 2.5TB drive is used for PC backup, docs/photos, and documents.  The volume is converted to GPT … and being 2.5 TB means that WHS2011 backup won’t back it up.  I’m looking at an alternative solution now.

Everything is in the same Windows 7 homegroup on the network.  I copied a bunch of video and music onto the machine last night.  I was streaming video from it to my netbook via Windows Media Player last night and that worked well.  I configured the remote access, and first thing thing this morning at work I was able to start watching “The King’s Speech” from home on my PC at work.  There is a minor loss in quality for bandwidth reasons but that’d be acceptable for most people I think.  That will come in handy whenever I’m staying in a hotel and the TV inevitably sucks.  As I write this post, I am listening to music streaming from home.  I can even log onto a home PC from work via the remote access feature – it’s kind of like using RDS Gateway – but much easier to configure.