Without System Center Virtual Machine Manager 2008 R2 (and pre-Windows Server 2008 R2 Hyper-V) there is only one way to move a virtual machine between un-clustered hosts or between Hyper-V clusters.  That is to perform what is referred to as a network migration.  Think of this as an offline migration.  The VM must be powered down, exported, the files moved, the VM imported again and powered up, maybe with the integration components being manually added.  The whole process means a production VM can be offline for a significant amount of time.  Moving a 100GB VHD takes time, even over 10GB-E.

However, if you have Windows Server 2008 R2 (on both source and destination) and VMM 2008 R2 then you can avail of Quick Storage Migration: 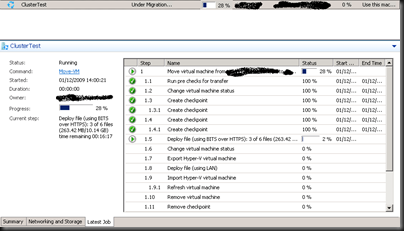 This is a clever process where a VM can remain up and running for the bulk of the file move.  Microsoft claims that the VM only needs to be offline for maybe two minutes.  That really does depend, as you’ll see.

We need to discuss something first.  Hyper-V has lots of several different types of virtualised storage.  One of them is a virtual hard disk (VHD) called a differencing disk.  It is specially an AVHD (advanced virtual hard disk).  It is used during a snapshot.  That’s a Hyper-V term.  VMM refers to it as a checkpoint.  The AVHD is created and the VM switches all write activity from it’s normal VHD to the AVHD.  All new data goes into the AVHD.  All reads for old data come from the original VHD.  That means the VHD is no longer locked, preventing copies.  See where we’re going here?

Here we have two un-clustered host machines, 1 and 2.  Host 1 is running a VM which has a single VHD for all of its storage.  We want to move it from Host 1 to Host 2 with the minimum amount of downtime.  We have W2008 R2 Hyper-V on both hosts and manage them with VMM 2008 R2. 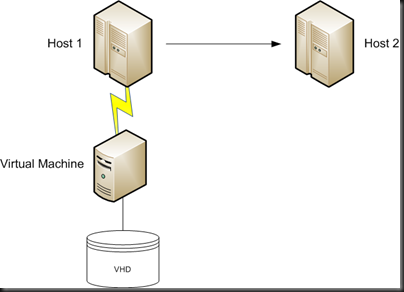 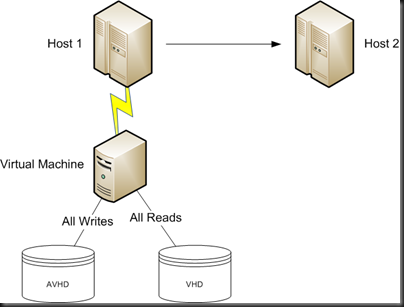 The VMM job creates a checkpoint (AKA snapshot) of the VM to be migrated.  This means the VM will put all writes in the AVHD file.  All reads of non-changed data will be from the VHD file.  Now the VHD file is no-longer prevented from being copied. 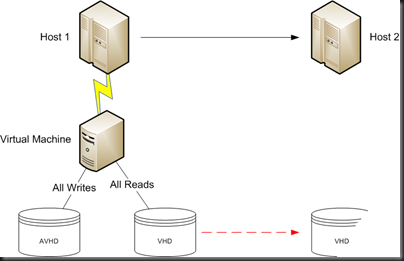 The VMM job uses BITS to copy the no-longer write-locked VHD from Host 1 to the destination storage location on Host 2.  During this time the VM is still running on Host 1.

Here’s where you have to watch out.  That AVHD file will grow substantially if the VM is writing like crazy.  Make sure you have sufficient disk space.  Anyone still doing 1-VM-per-LUN cluster deployments will need to be really careful, maybe pick a specific storage location for snapshots that has space.  Once the physical disk fills the VM will be paused by Hyper-V to save its continuity.  If your VM is write-happy then pick a quiet time for this migration. 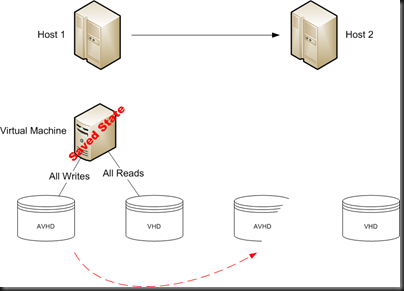 Start your stop watch.  Now the VM is put into a saved state (not paused) on Host 1.  We have to move that AVHD which is otherwise write locked.  If we don’t move it then we lose all the written data since the job started.  Again, BITS is used by VMM to move the file from Host 1 to Host 2. 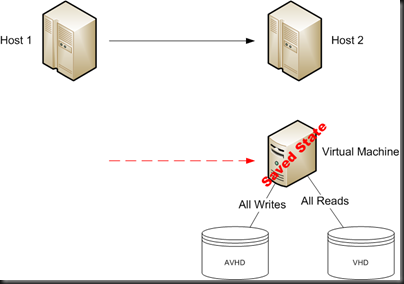 When the files are moved VMM will export the configuration of the VM from Host 1 and import it onto Host 2. 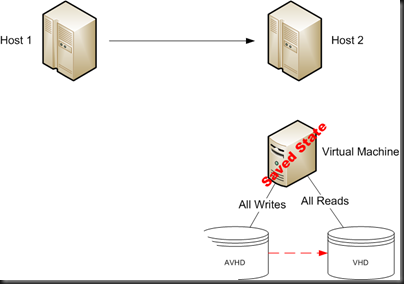 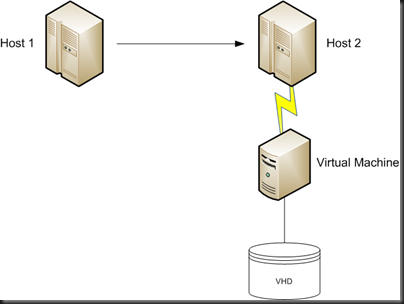 Stop your stop watch.  The virtual network connection(s) are restored and then the very last step is to change the virtual machine’s running state, bringing it back to where it was before it went offline.

The entire process is automated from when you finish the wizard and up to when you check on the machine after the job has ended.  It’s storage is moved and the VM continues running on the new host.

Note that a VM with multiple VHD’s will have multiple AVHD’s; it’s a 1-to-1 relationship.

How long does this take?

In my tests with an idle VM, the offline time (not timed scientifically) felt to be under a minute.

I moved a VM from a cluster to an un-clustered lab machine and back again.  Both times, the highly available setting was appropriately changed.  I was able to modify the virtual network connections appropriately in the migrate wizard.