A lot of companies have used a non-public domain name for their Active Directory. This meant that they didn’t have to buy an public domain name (but they probably did eventually for email), they had company politics issues, or they wanted to separate public from private (making resolution of external services easier). But this causes a problem when you are trying to federate or sync with Azure Active Directory, and I’ll explain a way to solve that issue here.

When we connect a legacy Windows Server AD (LAD) to AAD we need to have both domain names matching. So if the company has an AD called joeelway.internal then they cannot sync or federate that domain to an Azure AD called joeelway.com (the public DNS domain for the company) or joeelwayazure.onmicrosoft.com (a default domain name for an Azure subscription). This is because is we have a user, Barbara, then her UPNs would mismatch:

Method one is extreme and disruptive:

I think we can agree that method 1 is too disruptive. There is a softer approach that you can use:

Adding a suffix is easy: 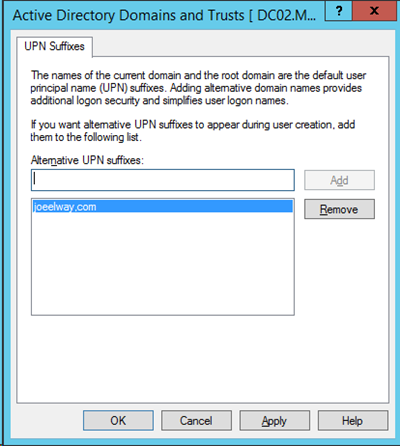 Next you’ll change the UPN of the users. You can do this in AD Users and Computers (very slowly) or Google some PowerShell to do it near instantly at scale. 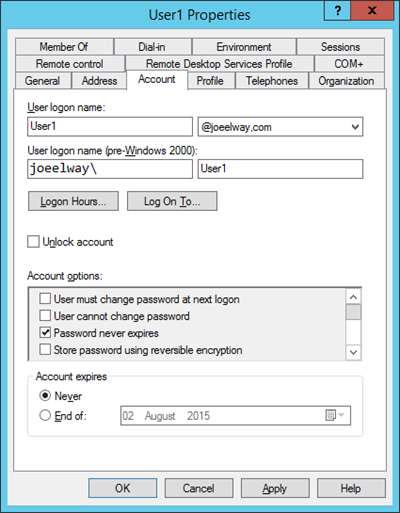 Users will now have a single UPN for LAD (Azure, Office 365, etc), AAD, (hopefully) their email, and any third party SaaS if you federate your AAD.

I bought joeelway.com for my demo lab so I can show the real world solution in classes. If you’re just experimenting, learning, or doing a quick demo, then you can use the Azure default domain name. The default domain name is based on the name of your Azure subscription, for example joeelwayazure.onmicrosoft.com. Use this domain name as the additional suffix in your LAD, and set the UPNs to use this, e.g. barbara@joeelway.onmicrosoft.com; use this UPN for logging into cloud services.