After a month of neglect, I have finally caught up with all of my feeds via various sources. Here are the latest bits of news, mixed up with other Microsoft happenings from the last month.

It was a bank (national) holiday weekend here in Ireland. I was also attending and speaking at E2EVC in Brussels, where I talked about designing and building Hyper-V over SMB 3.0 storage – that seemed to go down well to a full room.

Here’s a break down of the news from a slow weekend:

A monumental change is happing in IT right now. You can fight it all you want, but cloud is a disrupting force that will effect our entire environment. IT pros are scared of “the cloud” … but is their fear justified?

This is why a bunch of us are presenting on the IT pro aspects of the Microsoft Cloud OS on June 19th and 20th. It’s a 2 day event in Dublin Citywest, where you can register for the Hybrid Cloud stuff (infrastructure as a service or IaaS) on June 19th, the Office365/etc stuff (software as a service or SaaS) on June 20th, or even register for both days.

The content on June 19th will span on-premises IT, building private clouds, automation, and mixing your on-premise infrastructure with Microsoft Azure. On June 20th we move on to SaaS where there will be lots of Office 365, Windows Intune, and Power BI. All presenters have been instructed to present demo-heavy “here’s how to …” technical sessions.

Now is the time to learn and evolve. Don’t be a dinosaur; get on board with the cloud now and be the person who is employable in 5 years time. You can choose to cover your ears and close your eyes, but you’ll be dug up from an IT tar pit in a few million years time.

IT pros that ignored the cloud as it made them extinct

This event WILL NOT BE REPEATED. This is a once-off collection of subject expert speakers. No roadshow, no Microsoft Ireland event, and no partner event will repeat what we’re doing at TechCamp.

And consultants … this message goes double for you.

I took a break from these posts last week while I was at TechEd, and then had work catch up to do this week. Let’s get back a rockin’. There is a distinct tendency towards cloud and automation in the news of the last week. That should be no surprise.

Welcome to Houston where the keynote hall is full and they’re filling the overflow rooms for the Brad Anderson-led keynote at TechEd North America 2014. I am here with Petri IT Knowledgebase, sitting in the press section at the front of the hall.

I  live blogged as the event went on. Don’t expect much if anything in the way of Windows or System Center news. This will be a cloud year, where new features come out every 6 or so weeks, thanks to a cloud development cycle. I also do not expect Satya Nadella here.

Speaking of which; Nadella courted devs at a number of events in recent months, including Build. What will Microsoft do this week to convince influential IT pros that Azure won’t steal their jobs and that they are still important to Microsoft (they don’t feel that way lately)? 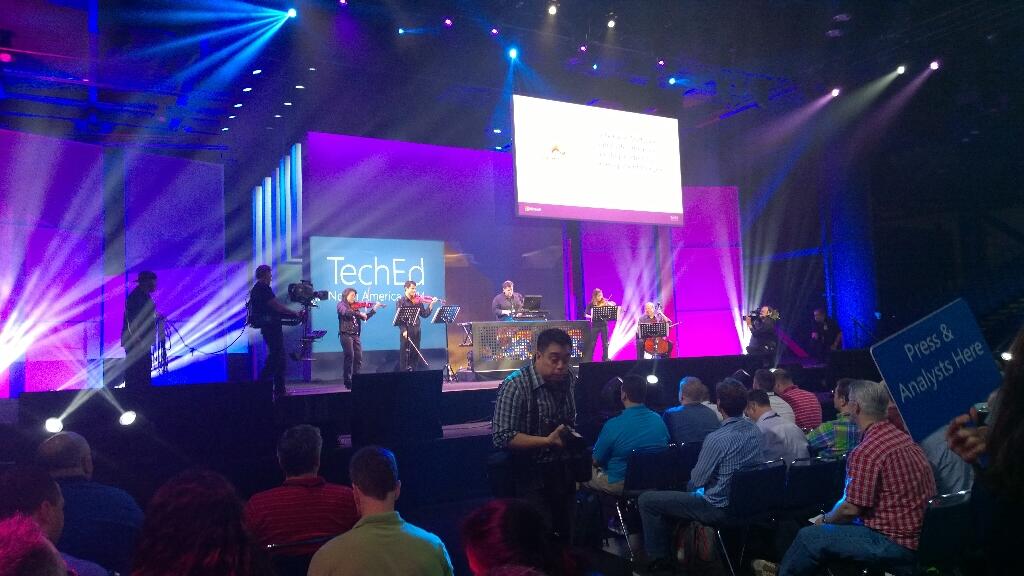 After a few songs they get a good reception. Now the 2 minute long teched countdown show kicks off with Joey Snow and Rick Claus.

Brad Anderson comes out sans-Aston Martin. He professes love for the new reign of Satya Nadella. As expected, Brad talks about devices and data of previously unimaginable growth. Cloud will be core to everything we do to manage devices (ever connected world) to derive insights from that data. There are no more devices than people on the planet.

On comes a video with some dude in black and white. It’s a new world, with low contrast film. It’s devices-devices-devices. No monkey boy dancing. Airy fairy stuff about storing data in trees. Yes; trees. I guess these guys are from MSFT Research.

Brad wants to talk about IT Pros. “IT pros are literally at the centre of cloud first and device first clouds”. “No longer think of public cloud as seperate; it is integral to your data center from this point forward”. 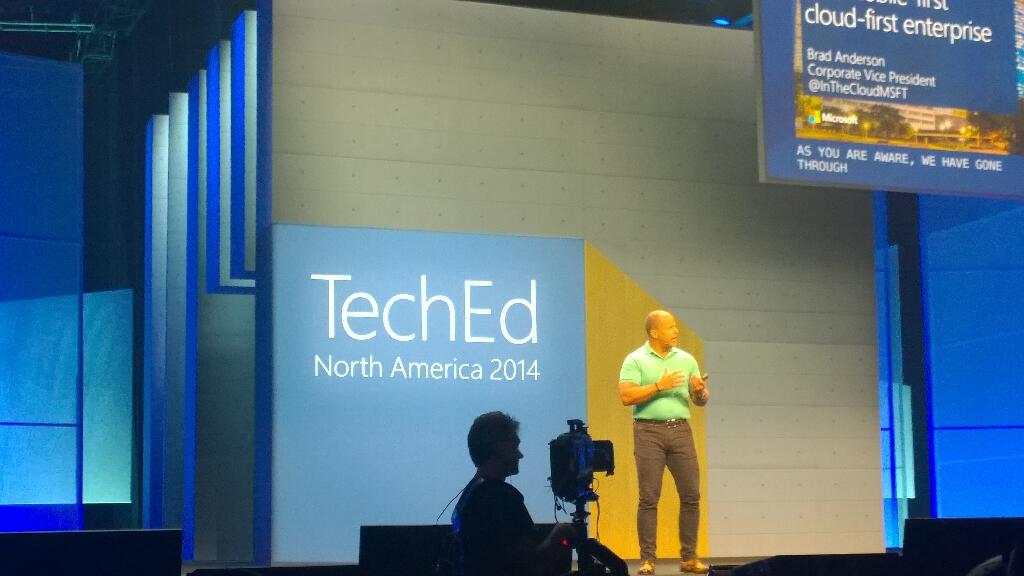 Three capabilities required when you consider a cloud. Choosing a cloud vendor wisely is critical for your future:

How could we change our industry if we had unlimited computing power. Here comes Respawn’s Titanfall, an Azure-powered online-only game. It had over 100,000 VMs on day 1, powered up around the world, with clients connected to the closest data centre. No worry about location or performance. They have solid and even compute capacity. They scale up and down as required to meet customer demand. They power lots of game functionality on the server, which they could not do on a console. 150 employees company has hundreds of thousands of VMs around the world.

16 regions. A new core is deployed every 5 seconds. 2 billion authentications a day being done by Azure Active Directory. They take this functionality and trickle it down to hosting partners (WAP, Hyper-V, and System Center). Windows Server Hyper-V is the common foundation across private, hosted, and public cloud. No lock in. Flexible expansion, shrink, and mobility.

On to SQL 2014. In memory gives 30x increase without re-writing application, just by adding RAM to existing h/w.

Out comes Josh Twist to talk about API Management. Wellmark is an American insurance company and Azure customer. He talks about this feature without explaining what it is. I’m lost.

Back to Brad with more announcements:

Here comes Matt McSpirit to talk about the latter. Azure Site Recovery can be your secondary site if you don’t have one. Can manage replication between sites and to Azure. Centralized management of the replica VMs. VMs can be encrypted while at rest.

A recovery plan orchestrates failover, test, planned, or unplanned. It will cleanly shut down VMs and replicate final changes in the event of a planned failover ( a flood is coming).  You can inject manual tasks into the orchestration.

We move on to identity, another MSFT USP. SaaS is powered by identity. For example, Office 365. Discover how many they are using with Cloud App Discovery. Often some 250 unmanaged SaaS apps in a company. IT has no control. IT needs to take control and manage identity and security.

Office on the 3 mobile OSs will be brought under management. Protection of files: Azure Rights Management Services (ARMS). Part of the EMS bundle for EA customers. The protection travels with the files: only the right people can access the files, even with accidental leakage.

Azure RemoteApp is Mohoro. It’s a RDS session host system designed to run in Azure. You upload LOB apps into Azure and users access them from cross-platform devices. AWS desktop as a service is a square wheel compared to Azure RemoteApp.

Demo: User signs into SaaS app using AD ID via ID federation into Azure AD.  80% of employees admit using non-approved SaaS apps. Cloud App Discovery tool allows admins to discover what apps are being used and how. Now IT can bring these apps under company control. Azure AD has 1300 templates for SaaS single-sign on.

Azure Remote App preview is GA today – note it is not live yet in the Europe regions. Publish apps over the highly performing RemoteFX protocol to devices of different OSs – Windows, iOS, Mac OS X, and Android. A little nod to Citrix.

Now on to the dev audience. I sleep.

I wake up. Now Brad is talking about users. Sadly, people have lost interest in the dev content and are leaving.

Humans can achieve if we focus. There is a flood of information that distracts. Need to move from information to action. Information is locked within boundaries inside organizations. BI stuff now. Yawn.

Demo on BI with old content from Barcelona promo video.

Back to Brad to talk about Office. Ugh, sounds like more BI.

Julia White to talk cloud productivity with Intune and Office 365. Basic demo of doc sharing in OneDrive for Business. Tell Me in Word Online is shown to help find how to do formatting. Can share from OneDrive for Business into Yammer. Yammer: IT managed social experience.

Back to Brad. More people leaving the hall. Not nearly as bad as Elop in 2009 (that was BAD) but a section of the audience has lost interest. This will be a talking point IMO.

Back to summarise. MSFT believes in cloud and getting us to embrace it. 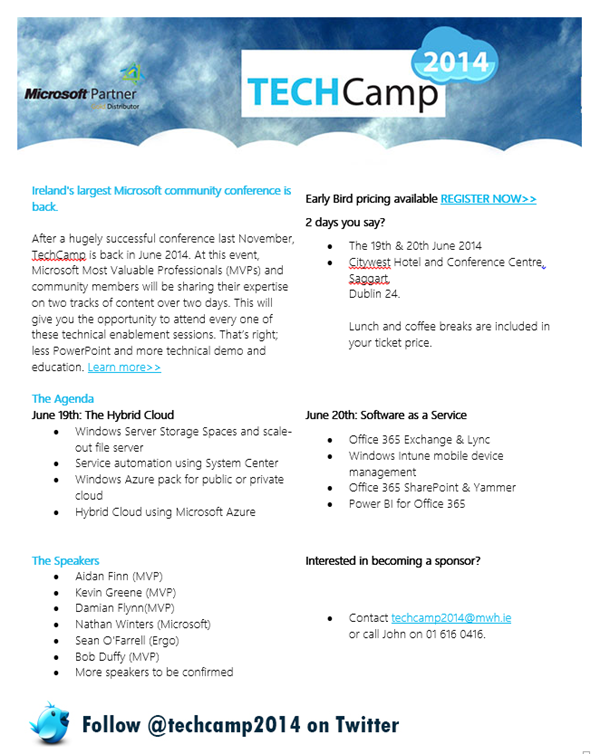 Is Office for iPad Free?

This is what we would call Free-mium software. You can quite happily download Microsoft Office for iPad from iTunes without paying a penny. And the four products will allow you to view/present your documents … and nothing more.

To create or edit content you will need to pay for a suitable Office 365 plan, which you can buy online or in a retail store (basically a key code).

How do I buy Microsoft Office for iPad?

You will need to buy a suitable Office 365 plan. Right now, those plans allow for 5 installs on PCs & Macs, and 5 installs on tablets. A new Personal plan will allow for 1 install – I don’t know the precise details but I suspects one install on PC/Mac and one on tablet.

Which Office 365 plans include Office for iPad?

As stated by Microsoft, the plans are:

So my advice: if there’s any chance that your users/customers will require office on cross platform devices, then buy an M plan (medium biz) or an E3/E4 plan (larger biz or fully featured). Or choose the appropriate education plan or consumer plan for those markets.

BTW, the education plans are REALLY attractive to institutions now. Associate with and talk to a cloud distributor to learn more.

Note that if you did buy an E1 plan then you can upgrade to an E3 or E4 plan. If you bought Small Business then you have lots of options.

I was talking with the Office 365 licensing guru of Ireland, Nicole Sheridan of MicroWarehouse, tonight about this topic and she corrected me on something. Customers can only upgrade their plan if they bought direct (MOSPA). Upgrades are not available via other channels.

If you obtain your Office for iPad licensing via a non-commercial plan, i.e. Home or Personal, then you may not use that license for commercial work. Doing so is a breach of the terms of licensing (you need a  license upgrade). BTW CIOs, this is impossible to audit.