Fancy a nice new wallpaper for your big monitor?  Or do you want to print this sucker out, and hang it up to help you learn the new version of Hyper-V?  Microsoft has released an updated poster that digs into the new features of Windows Server 8 Hyper-V. 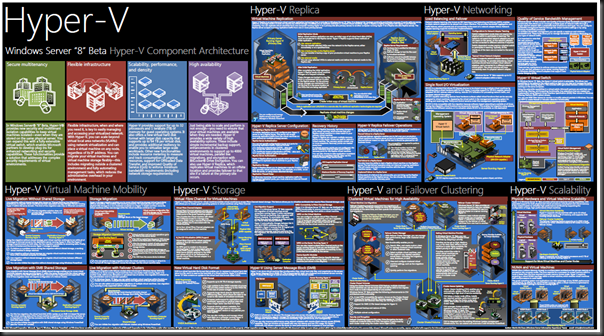 I wanted to get more VMs onto my Windows Server 8 Hyper-V lab, so I wanted to change my Dynamic Memory settings in my virtual machines.  I don’t have the patience to edit every VM.  PowerShell to the rescue:

This script gets every VM on this host, passes through the VM via the pipe into the Set-VMMeory cmdlet, and then reconfigures the Dynamic Memory settings that I care about.  Time required by editing & running this in ISE: 1 minute.

Following my post on information for VMM 2012 SP1 CTP, Microsoft released the CTP downloads.  This includes the VMM download and a download for DPM 2012 SP1 CTP.

The supported operating systems for DPM 2012 SP1 CTP are:

This download provides a step-by-step guide that walks you through the new Virtual Machine Manager (VMM) features in the CTP of System Center 2012 SP1.

New Features In The CTP Release

Bear in mind that this is just the CTP release, wa-ay before beta.

Microsoft released a lot of documentation/downloads to go with the Windows Server 8 beta release of last week.  Here’s your chance to start learning and playing:

What?  You’re kidding, right?  Nope: Microsoft is adding online backup to Windows Server 8.  From the guide:

Microsoft Online Backup Service is an installable service for Windows Server “8” Beta, which allows for file and folder backups to the cloud service

It cannot backup system state.  That’s OK.  I’ve worked in in online backup and when people backup everything and see the first invoice for space consumed, well, they quickly decide that business data backup/recovery will be enough.

Access to Microsoft Online Backup Service is limited at first to successful applicants.  The installation:

The backup can be configured via Computer Management or via PowerShell cmdlets:

Data is encrypted using a passphrase of your choosing or auto generated (minimum of 16 characters). I love that: passphrase.  MSFT has no record of the passphrase and therefore cannot restore your data for you if you lose the passphrase.

The following table lists the supported list of file and folder attributes/types and the expected behavior of the Microsoft Online Backup Service when it encounters these types:

You pick and choose files/folders just as you would with a normal backup.  You can have X backups per day (3 during beta) and set a retention period for your data (longer = more space = higher cost).

You can restore data using a familiar interface to the original server or another one from a backup of your choosing from within the retention window.  This will require credentials to access and the passphrase to decrypt.

Notes: I don’t see anything about data de-duplication or compression before backup, but that does not mean they are not there, just that this document doesn’t mention them.  I do not see anything for seeding large backups using an out of band device, such as I used when managing an Iron Mountain based service.  There is no mention of backing up Hyper-V VMs.  I think this would price this solution out but it might be an option for some.  I’ll try too find out more.

I once worked in a hosting environment where we had many thousands of websites per physical web server host.  I was witness to much of the fun with that sort of scale on IIS.

Windows Server 8 brings a lot of improvements to IIS 8, particularly for spinning up websites and SSL scalability (SSL doesn’t require dedicated IPv4 per site) and manageability (SSL certs on the file system and import via copy).

You can find out more at:

The Microsoft iSCSI target enables you to turn Windows into an iSCSI storage platform.  This can provide economic storage, or give you an iSCSI gateway into a different type of storage.  It’s a free download right now, and will be built into Windows Server 8.

Now for the question:

If you do have a case then please let me know.  I’ll need specifics – customer, case, how it’ll be used, etc.  Who knows …

Hyper-V Server 8 is the free Hyper-V product, that includes all the functionality of Hyper-V and Failover Clustering.  The market for it is actually very small.  If you have 4 or more Windows VMs, and if you license them correctly and legally, it’s actually cheaper to license the host (and avail of the virtualisation rights) to license the VMs (BTW, the license is always assigned to the host even if you think you licensed a VM, and Windows volume licenses can only move once every 90 days).

However, a small percentage benefit from Hyper-V Server, including those doing VDI or Linux virtualisation.

Another big investment by Microsoft in Windows Server 8 Hyper-V was how we interact with the product. With lots more functionality, and some of it being very advanced and not required by everyone, they had to decide how to present it in the GUI.  And with huge cluster scale out (up to 64 hosts per cluster) and target markets such as hosting and large enterprise, automation was of great importance.

Often we fire up the HMC to just look for information.  Tabs have been added in the lower centre pane of HMC to show us information, e.g. summary, memory, networking, and Hyper-V Replica (aka Replica).

When you open the settings of a VM to change it’s configuration you will notice that the CPU and Networking nodes on the left are nested.  There are sub-nodes with more settings.  This is done for some reasons including:

A classic problem for the forums was when a person would edit the settings of a VM in the HCM and live migrate the VM from one host to another in a host cluster.  Their new settings were lost because the cluster database was not updated.  You had to either use Failover Cluster Manager (FCM) to edit the VM settings (auto-update of settings) or remember to manually update the VM resource in FCM after editing it the VM in HCM.

Now, HCM will detect that a VM is clustered and prevent you from editing the settings.  You must use the FCM instead, and quite right too!

Have you ever been ticked off when you use VMConnect to get a console connection to a VM and then you fail it over to another node in a Hyper-V Cluster?  Actually, ticked off isn’t the right word the first time you see this: you crap yourself when VMConnect loses the console connection to the VM and confusingly tells you that the VM must have been deleted!  That’s changing in Windows Server 8.  Yes, VMConnect will disconnect – briefly.  The source host for the VM will redirect the VMConnect session to the VM on the destination host.  No more tingling in the left arm or tightening of the heart when working on a VM at midnight.  Hyper-V engineers and their doctors thank you, Microsoft!

The big change is that Hyper-V will have built-in PowerShell (POSH) cmdlets for the very first time in Windows Server 8.  Even from a POSH-disabled person like me, the cmdlets looked easy to use and very powerful to me in the hands on lab that I did.  For you POSH purists, I’ve been told that the Hyper-V POSH cmdlet specs were written so things would be done the POSH way.

With some hep I had created a script that read in some specs from a CSV file, created a bunch of differential disks, created lots of VMs, and connected them to those disks.  One test lab up and running in a few minutes, that could be recreated in a moment’s notice.  I’m sure with more practice, I could have made the script much more elegant than I had in the limited time window.

It’s this sort of thing that the POSH cmdlets are intended to enable.  Big hosting companies can automate deployment from their “control panels”.  Enterprises can automate bulk configuration changes.  We people who demo can deploy a new lab in seconds.  And with POSH 3.0 Workflows you can build complex scripts that work reliably and in an orchestrated manner across many machines and applications.