Let me tell you a tale … a tale of a contracted-for and paid-for service mobile phone Internet & SMS/Text data services that Vodafone Ireland is failing to provide me with.

This tale of woe starts on Thursday 15th February. I was on the road to visit a client in Limerick (I live in northern Kildare). I’d pulled into a service station and wanted to check to see what podcasts or audio books I had to listen to on the long drive. And I found that I had no Internet access. It’s not unusual to have blackspots so I ignored the inconvenience. Near the client site, I pulled in and opened my phone to navigate my way there because they had recently moved. And now, in Limerick City, I had no data services, even though I had a full 4G or 3G signal. Hmm! I made my way there anyway, and texted my wife … and the text failed to send. So I had lost all data services: Internet and SMS. Maybe it was a network glitch.

I left 5 hours later and I still had no service. I drove home, verified that I could browse on my wi-fi. I still had no data services when just on the Vodafone Ireland network. I made my first call.

I got home and called “Customer Care”. I explained the issue clearly and patiently. I rebooted my fairly new iPhone 8 several times as requested. After about half an hour, I was told that either my phone was broken or the SIM needed to be replaced. There was “nothing else” that could be done.

On Sunday 18th February, I finally had time to visit a Vodafone Ireland store – a 1 hour round trip. I walked in and quickly got a replacement SIM. I got home, swapped the SIM, rebooted and …

The problem was still there. The services that Vodafone Ireland are contracted to offer and paid to do were still not available:

Immediately, after that, still on Sunday 18th February, I called “Customer Care”. I must have spent 45-60 minutes explaining the problem and rebooting the phone as requested. Eventually the agent said there was nothing more he could do for me.

My problem here is that I needed my phone on Wednesday. My business, Cloud Mechanix, was running a training class in London on Thursday/Friday and I would be travelling on Wednesday. This just was not going to be good enough.

This is when I told the “care” agent that at this time, Vodafone Ireland was no longer offering me the service I had contracted for and paid for. I demanded a release from my contract. I needed a service, and if Vodafone Ireland would not offer me my mobile broadband and texting services, then I would have to get these services that my business needs from elsewhere.

The agent flipped. I repeated myself several times. Eventually I hung up. He called me back. I demanded to speak to a manager, and I was told that was not possible. If you read my previous posts about Vodafone Ireland, then you’ll know the truth about manager callbacks.

By the way, those posts remained on the first page of search results for “Vodafone Ireland Home Broadband” for several years – fixing my technical problem efficiently would have been much cheaper than the SEO damage that I caused this company.

I ended up hanging up again. And he called again, and again, and probably more. I stopped answering.

I ended up having to drive 30 minutes, each way, to an Eir store to buy a pay-as-you-go SIM. After unlocking the SIM and paying credit, I had instant text and data services on the Eir network. At least I would have a phone service for my work trip to London.

I tweeted my displeasure on Monday 19th February, making sure that @VodafoneIreland was mentioned. Eventually, they (“Aoife”) asked me to DM my details. I did. 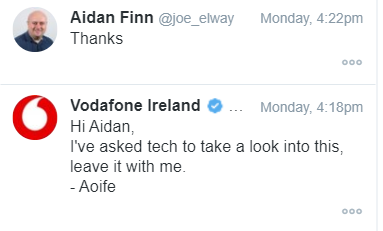 I waited several hours, and nothing had happened. I warned them that I would be blogging about this, and doing some SEO damage. I also demanded a complaint ID so I could open a case with COMREG, the Irish telecoms regulator. Here was the response, on Tuesday 20th February: 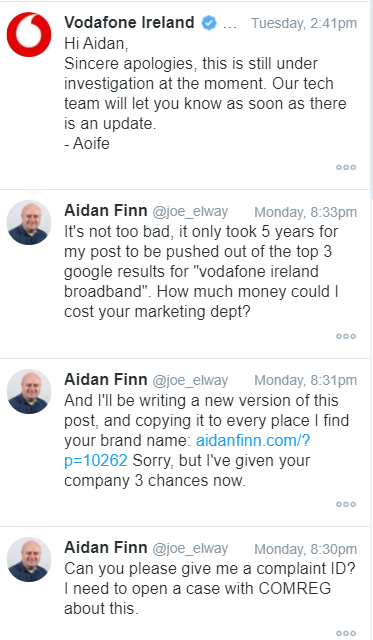 The promised contact from the “tech team” didn’t happen. I’ve been to London and back, using my Eir SIM, even though I’ve paid my contracted €60 for this month’s Vodafone Ireland services including:

Two thirds of those essential services have been unavailable for 10 days now.

I expect the following:

If you work for Vodafone Ireland social media/marketing, then be aware that this will escalate. I’ve done it to you before. I’ve done it to Eircom. I’ll do it to you. It will be cheaper to make me happy than to undo the damage I will incur.

I won. I also got a refund via credit to my account.

4 thoughts on “How Bad is Vodafone Ireland’s Mobile Phone Service?”