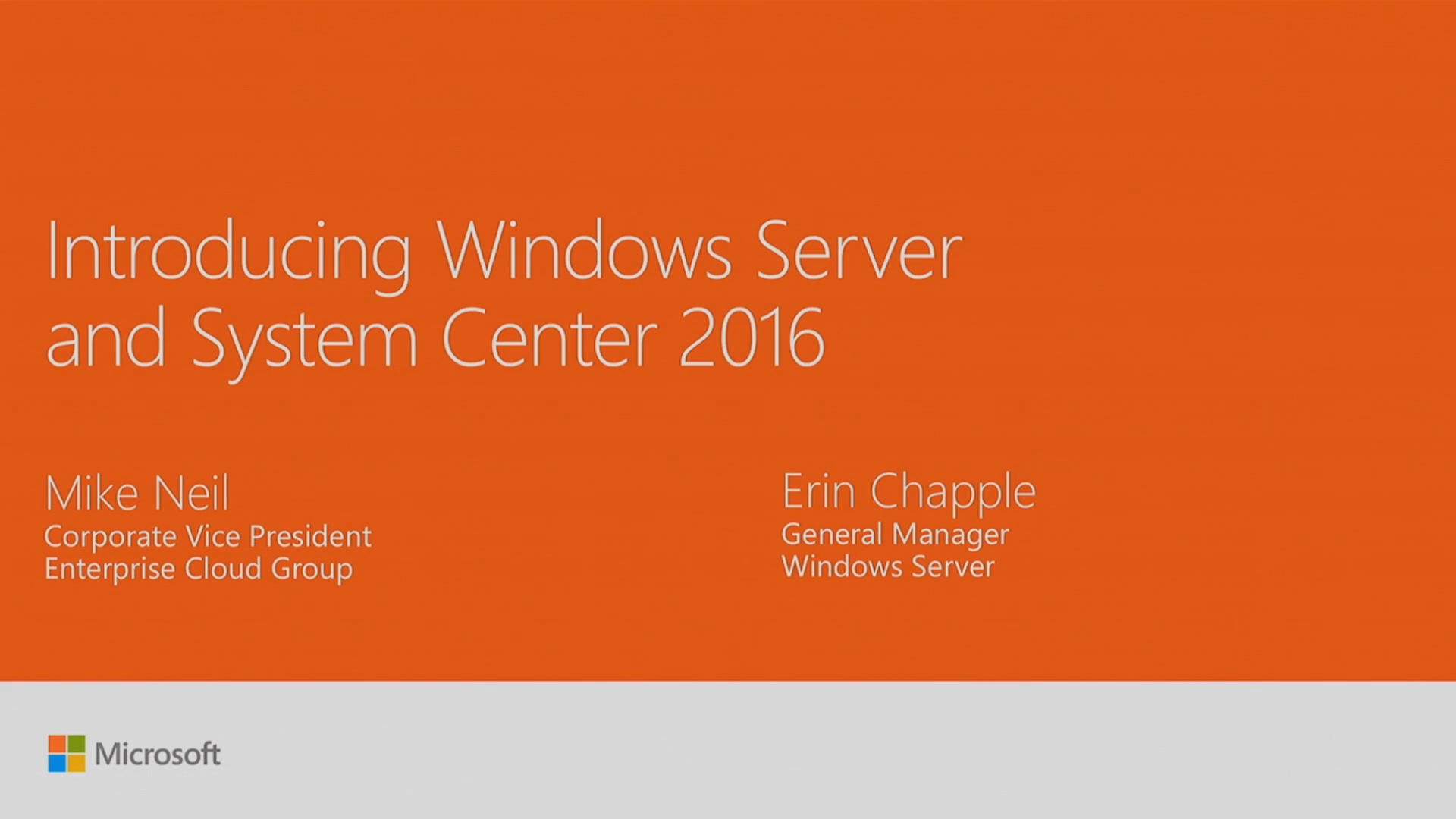 This session (original here) introduces WS2016 and SysCtr 2016 at a high level. The speakers were:

A selection of other people will come on stage to do demos.

Windows Server is 20 years old. Here’s how it has evolved: 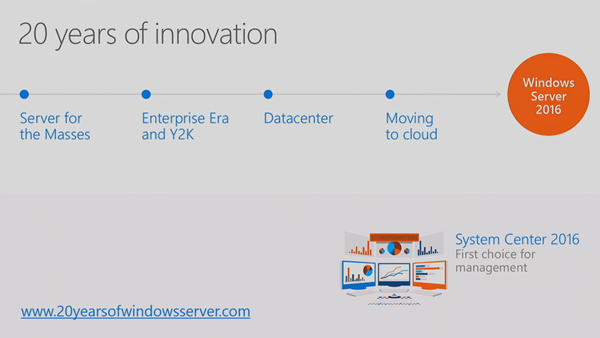 The Foundation of Our Cloud

The investment that Microsoft made in Azure is being returned to us. Lots of what’s in WS2016 came from Azure, and combined with Azure Stack, we can run Azure on-prem or in hosted clouds.

There are over 100 data centers in Azure over 24 regions. Windows Server is the platform that is used for Azure across all that capacity.

IT is Being Pulled in Two Directions – Creating Stresses

Microsoft’s solution is to use unified management to:

Mike shows a number of security breach headlines. IT security is a CEO issue – costs to a business of a breach are shown. And S*1t rolls downhill.

To protect against compromised admin credentials: 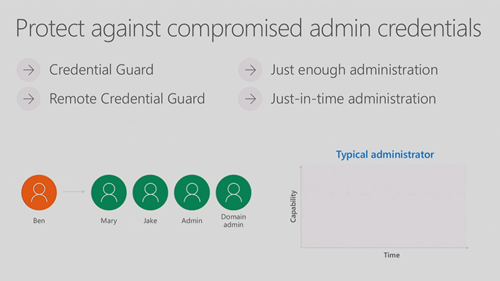 The solution closes the door on admin ID vulnerabilities.

Ryan Puffer comes on stage to do a demo of JEA and JITA. The demo is based on PowerShell:

Someone can mount a VMs disks or copy a VM to gain access to the data. Microsoft believes that attackers (internal and external) are interested in attacking the host OS to gain access to VMs, so they want to prevent this.

This is why Shielded Virtual Machines was invented – secure the guest OS by default:

This is a journey that has been going on for several releases of Windows Server. Microsoft has learned a lot from Azure, and is bringing that learning to WS2016. 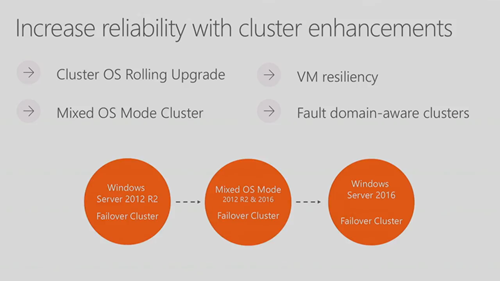 24 TB of RAM on a physical host and 12 TB RAM in a guest OS are supported. 512 physical LPs on a host, and 240 virtual processors in a VM. This is “driven by Azure” not by customer feedback.

Evolving Storage Spaces from WS2012/R2. Storage Spaces Direct (S2D) takes DAS and uses it as replicated/shared storage across servers in a cluster, that can either be: 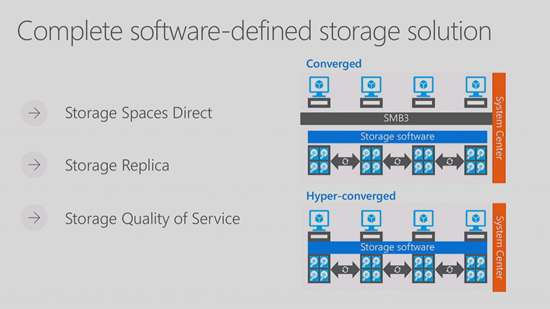 Storage Replica introduces per-volume sync/async block-level beneath-the-file system replication to Windows Server, not caring about what the source/destination storage is/are (can be different in both sites) as long as it is cluster-supported.

Storage QoS guarantees an SLA with min and max rules, managed from a central point:

The owner of S2D, Claus Joergensen, comes on stage to do an S2D demo.

Note the CPU usage for the host, which is modest. That’s under 10% utilization per node to run the infrastructure at max speed! Thank Storage Spaces and SMB Direct (RDMA) for that! 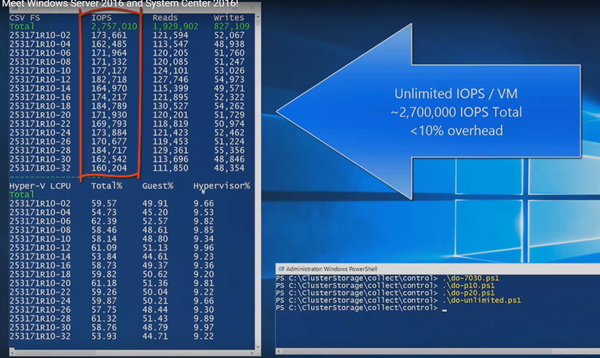 If you want to know where to get certified S2D hardware, then you can get DataON from MicroWarehouse in Dublin (www.mwh.ie):

Nano Server is not an edition – it is an installation option. You can install a deeply stripped down version of WS2016, that can only run a subset of roles, and has no UI of any kind, other than a very basic network troubleshooting console.

It consumes just 460 MB disk space, compared to 5.4 GB of Server Core (command prompt only). It boots in less than 10 seconds and a smaller attack surface. Ideal scenario: born in the cloud applications.

Nano Server is not launched in Current Branch for Business. If you install Nano Server, then you are forced into installing updates as Microsoft releases them, which they expect to do 2-3 times per year. Nano will be the basis of Microsoft’s cloud infrastructure going forward.

A lot of stuff from Azure here. The goal is that you can provision new networks in minutes instead of days, and have predictable/secure/stable platforms for connecting users/apps/data that can scale – the opposite of VLANs.

Greg Cusanza comes on stage – Greg has a history with SDN in SCVMM and WS2012/R2. He’s going to deploy the following: 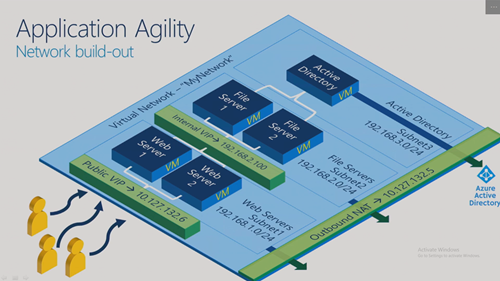 That’s a virtual network with a private address space (NAT) with 3 subnets that can route and an external connection for end user access to a web application. Each tier of the service (file and web) has load balancers with VIPs, and AD in the back end will sync with Azure AD. This is all familiar if you’ve done networking in Azure Resource Manager (ARM).

This leads us to dynamic security (network security groups or firewall rules) in SDN – more stuff that ARM admins will be familiar with. He’ll also add a network virtual appliance (a specialised VM that acts as a network device, such as an app-aware firewall) from a gallery – which we know that Microsoft Azure Stack will be able to syndicate from : 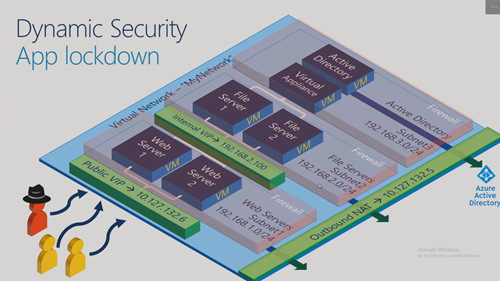 The virtual appliance is a network device that runs a customized Linux.

Back to Mike Neil. We now have a diverse set of infrastructure that we can run applications one: 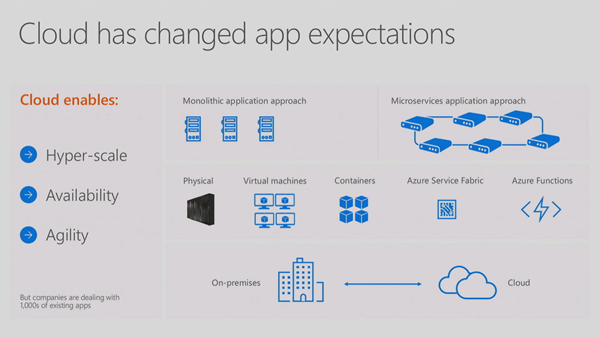 A container virtualizes the OS, not the machine. A single OS can run multiple Windows Server Containers – 1 container per app. So that’s a single shared kernel – that’s great for internal & trusted apps, similar to containers that are available on Linux. Deployment is fast and you can get great app density. But if you need security, you can deploy compatible Hyper-V Containers. The same container images can be used. Each container has a stripped down mini-kernal (see Nano) isolated by a Hyper-V partition, meaning that untrusted or external apps can be run safely, isolated from each other and the container host (either physical or a VM – we have nested Hyper-V now!). Another benefit of Hyper-V Containers is staggered servicing. Normal (Windows Server) Containers share the kernal with the container host – if you service the host then you have to service all of the containers at the same time. Because they are partitioned/isolated, you can stagger the servicing of Hyper-V Containers.

Taylor Brown (ex- of Hyper-V and now Principal Program Manager of Containers) comes on stage to do a demo. 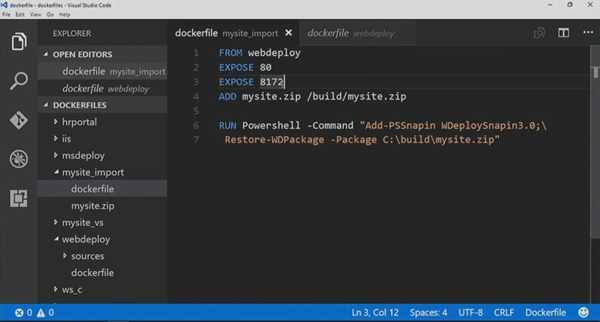 Microsoft has been a significant contributor to the Docker open source project and one MS engineer is a maintainer of the project now. There’s a reminder that Docker’s enterprise management tools will be available to WS2016 customers free of charge.

Mahesh Narayanan, Principal Program Manager, comes on stage to do a demo of SCOM. IT pros struggle with alert noise. That’s the first thing he wants to show us – it’s really a way to find what needs to be overriden or customized.

Maintenance cycles create a lot of alerts. We expect monitoring to suppress these alerts – but it hasn’t yet! This is fixed in SCOM 2016:

All those MacGuyver solutions we’ve cobbled together for stopping alerts while patching can be thrown out!

That was all for System Center? I am very surprised!

Joey Aiello, Program Manager, comes up to do a demo. I lose interest here. The session wraps up with a marketing video.