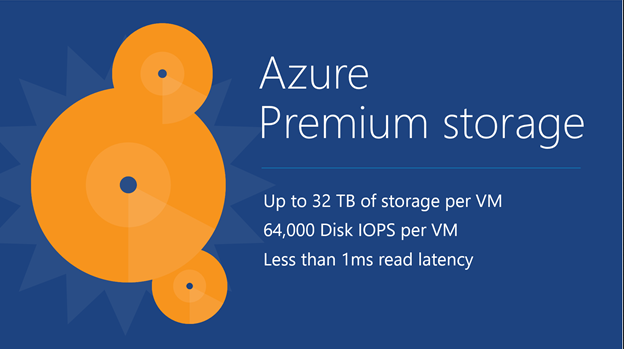 If you are deploying services that require fast data then you might need to use shared SSD storage for your data disks, and this is made possible using a Premium Storage Account with DS-Series or GS-Series virtual machines. Read on to learn more.

A typical virtual machine will offer up to 300 IOPS (Basic A-Series) or 500 IOPS (Standard A-Series and up) per data disk. There are a few ways to to improve data performance:

Although there is nothing faster than RAM there are a couple of gotchas:

If an SSD cache is not big enough either, then maybe shared SSD storage for data disks would offer a happy medium: lots of IOPS and low latency; It’s not as fast as RAM, but it’s still plenty fast! This is why Microsoft gave us the DS- and GS-Series virtual machines which use Premium Storage.

Shared SSD-based storage is possible only with the DS- and GS-Series virtual machines – note that DS- and GS-Series VMs can use standard storage too. Each spec offers support for a different number of data disks. There are some things to note with Premium Storage:

The maximum sizes and bandwidth of Azure premium storage

You can find the pricing for premium storage on the same page as standard storage. Billing is based on the 3 models of data disk, P10, P20, and P30. As with performance, the size of your disk is rounded up to the next model, and you are charged based on the amount of storage actually consumed.

If you use snapshots then there is an additional billing rate.

I have been asked to deploy an Azure DS-Series virtual machine in Western Europe with 100 GB of storage. I must be able to support up to 100 MB/second. The virtual machine only needs 1 vCPU and 3.5 GB RAM.

So, let’s start with the VM. 1 vCPU and 3.5 GB RAM steers me towards the DS1 virtual machine. If I check out that spec I find that the VM meets the CPU and RAM requirements. But check out the last column; The DS1 only supports a throughput of 32 MB/second which is well below the 100 MB/second which is required. I need to upgrade to a more expensive DS3 that has 4 vCPUs and 14 GB RAM, and supports up to 128 MB/second.

I got pricing for virtual machines from the “Ibiza” preview portal. There I could see that the DS3 will cost around €399/month, compared to around €352/month for the D3.

[EDIT] A comment from Samir Farhat (below) made me go back and dig. So, the pricing page does mention DS- and GS-Series virtual machines. GS-Series are the same price as G-Series. However, the page incorrectly says that DS-Series pricing is based on that of the D-Series. That might have been true once, but the D-Series was reduced in price and the DV2-Series was introduced. Now, the D-Series is cheaper than the DS-Series. The DS-Series is the same price as the DV2-Series. I’ve checked the pricing in the Azure Preview Portal to confirm.

If I use PowerShell I can create a 50 GB data disk in the standard storage account. Azure will round this disk up to the P10 rate to determine the per GB pricing and the performance. My 50 GB disk will offer:

The pricing will be €18.29 per GB per month. But don’t forget that there are other elements in the VM pricing such as OS disk, temporary disk, and more.

Once could do storage account snapshots to “backup” the VM, but the last I heard it was disruptive to service and not supported. There’s also a steep per GB cost. Use Azure Backup for IaaS VMs and you can use much cheaper blob blobs in standard storage to perform policy-based non-disruptive backups of the entire VM.