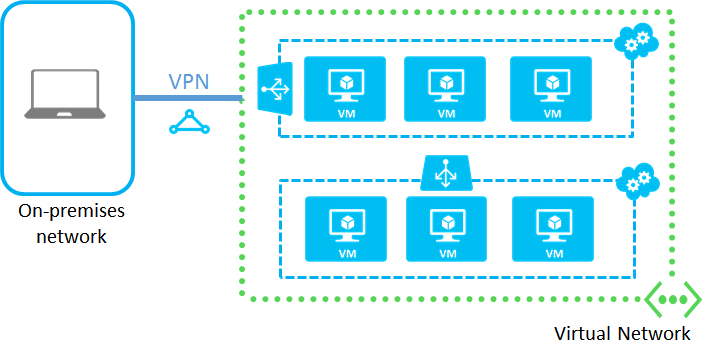 When I started learning how to use Azure IaaS, I probably spent most of my time learning about Azure virtual networking. I found VMs to be easy; it’s just self-service virtualization and it’s based on Hyper-V so it was an easy evolution for me. But the networking required a bit of learning, especially because there are lots of options, lots of it is driven by PowerShell, and it is constantly evolving.

What are Virtual Networks?

As I’ve said many times before, I used to work in the hosting business, back in a time when the VLAN was the dominant way to deploy customers. If sales signed up a customer, that customer got one or more VLANs, and the network guys panicked. More VLANs were being added, more firewall rules had to be deployed, and NAT had to be configured. We were looking at hours-to-days of waiting before I could drag a few templates from the VMM or vCenter library to have the customer up and running. In Azure, you do not call up Microsoft and say “hey, I need 2 VLANs, please”. Instead, you run some PowerShell or walk through a wizard and deploy your own isolated network address space.

A virtual network is kind of like a LAN. It is am isolated address space that can be divided into automatically routed subnets. You can create virtual networks from each of the following ranges:

We use these virtual networks and subnets to connect virtual machines within a single region. Each virtual network is isolated, so you might create 2 vNETs and they will be completely secure from each other unless you take steps to connect them.

The above diagram shows a deployment of a virtual network with 2 subnets, modelling the concept of a DMZ and back-end subnet. By default, there are no firewall rules or blocks between subnets in the same virtual network. However, you can deploy a policy-based set of rules called network security groups (NSGs) to isolate virtual machines or subnets.

As you can see, they are private ranges. You can get up to 5 public IP addresses for free (if you use them) to implement NAT-like “end points” with virtual machines, where you specify that if any traffic come in on a port, that traffic is sent to a VM or set of VMs (external load balancing, which is free, as is internal load balancing). This public IP addresses are usually provided by a cloud service, and are called VIPs (virtual IP addresses). Note that VIPs are dynamic by default, but you can reserve them for free (as long as the associated service is active).

You can carve up your address space to create VLANs. I recommend two practices with my customers:

As I said before, a virtual network is isolated. You can create endpoints to allow traffic into virtual machines from the Internet. However, you might want private communications between 2 vNETs or between a vNET and an on-premises network. This is made possible using a gateway.

A gateway is a virtual appliance that you deploy on your vNET, usually in a /29 subnet that supports just 3 IP addresses (default gateway to route, and 2 others);  vNET can have one gateway. The gateway is actually a cluster of 2 virtual machines that are managed by Azure – you simply configure gateway settings and you cannot even see these VMs. The purpose of the gateway is to enable private and secure network connections with routing:

There are 3 models of gateway that you can deploy:

The basic gateway breaks down into two types:

Long story-short, we always want dynamic routing, but only a small number of on-premises appliances support it.

You can find feature support across the tiers and types of gateway below:

Remember how I said a gateway is a pair of VMs? The basic tier is a VM with 1 vCPU. This limits how many interrupts the VM can handle and this restricts inbound bandwidth to around 80 Mbps (100 is listed but 80 is what is achievable). The next tier up, Standard, uses VMs with 2 x vCPUs and this doubles the interrupt handling capability, increasing the inbound bandwidth to 200 Mbps – thank you Hyper-V vRSS.

These are two features that are almost related because they are likely to be used together. In the above diagram, NSGs are used to restrict network communications. Force Tunneling could also be used:

I’ve already talked about how VIPs are used to enable the public Internet to access your vNETs, subject to endpoint rules that you create. What about internal addresses? The Azure vNET will supply the IPv4 configurations to your VMs. From the guest OS point of view, this is DHCP … AND YOU SHOULD LEAVE IT THAT WAY.

The default gateway of a vNET is the first IP address in the range – .1 if you follow my KISS rule. The first VM to come online will be assigned the 4th address (KISS: .4) and then the fifth, etc. VMs will not get static addresses. If you shutdown (de-allocate) a VM then it is not guaranteed the same IP if you reboot it – however you can reserve an IP; I typically do this with DCs.

Name services can also be deployed, e.g. DNS on a DC. You can pre-define the DNS part of the IPv4 stack for VMs in the properties of a vNET.

Multiple NICs in a VM

I dealt with this topic a little while ago in a post about finding specs for Azure VMs. Some VM specs support more than 1 vNIC. From what I can make out, this is intended for vendors who are creating virtual appliances that need to span more than one vNET; consider a firewall that connects the external world and VMs in several vNETs – you don’t want any routing other than the firewall appliance so that appliance needs to be able to communicate directly with each vNET.

Connecting a virtual appliance to multiple subnets in an Azure vNET

Some good news: vNETs are free. You can have up to 50 vNETs in a single subscription, with up to 2048 VMs per vNET, and up to 500,000 concurrent TCP connections per VM.

NSGs and Forced Tunneling are both free. You can have up to 100 NSGs with 200 rules each per subscription.

You can have up to 50 reserved VIPs, 5 of which are free (including reservation) if they are being used. The pricing for the additional 15 or unused VIPs are found here. Private IP addresses are free.

Pricing for a gateway is found here – that covers the cost of connecting a VPN, but you also need to account for outbound data transfers (egress data).  Note that you’ll need to work with an ExpressRoute partner to figure out the pricing of that solution – here’s the Microsoft element – I know that Microsoft wants to simplify this pricing, as announced at the recent AzureCon online event.

This is one of the most mis-understood elements of Azure. There are two types of data transfer:

ExpressRoute is charged based on bandwidth (no data transfer charges across this private connection) or metered data (contact your ISP).

Everything else is subject to ingress/egress rules. Azure does not charge for inbound data transfers. And now things get complicated.

Despite many myths, outbound data transfer is charged for, but it depends on the service. If you are using Azure Backup, there is no network data transfer charge. If you have VMs sending data to the Internet or outbound via VPN, then that is subject to charge.

Pricing is based on North Europe at the time of writing.

A customer is deploying a web farm in Azure. They want a virtual network that will have 3 subnets: web, application, and database. They need to offer online web services via 2 always active VIPs, and 1 usually de-allocated VIP. There will be 10 load-balanced web servers (external load balancing) and 5 load balanced application servers (internal load balancing). A site-to-site VPN connection is required from on-premises, the firewall is a WatchGuard Firebox, with a 50 Mbps connection. Each vNET must have policy based isolation. Web servers can talk directly to the Internet, but app and database servers must always route via the VPN to anything other than the web servers. The web servers are expected to send 1 TB of data to the Internet and receive 400 GB of data.

OK … let’s break this down: