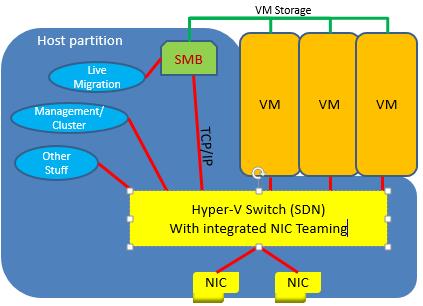 Note, according to Microsoft:

In Windows Server 2016 Technical Preview, you can enable RDMA on network adapters that are bound to a Hyper-V Virtual Switch with or without Switch Embedded Teaming (SET).

Right now in TPv3, SET does not support Live Migration – which is confusing considering the above diagram.

SET is an alternative to NIC teaming. It allows you to converge between 1 and 8 physical networks using the virtual switch. The pNICs can be on the same or different physical switches. Obviously, the networking of the pNICs must be the same to allow link aggregation and failover.

No – SET does not span hosts.

SET is much more fussy about NICs than NIC teaming (which continues as a Windows Server networking technology because SET requires a virtual switch, or Hyper-V). The NICs must be:

SET is compatible with the following networking technologies in Windows Server 2016 Technical Preview.

SET is not compatible with the following networking technologies in Windows Server 2016 Technical Preview.

There is no concept of a team name in SET; there is just the virtual switch which has uplinks. There is no standby pNIC; all pNICs are active. SET only operates in Switch Independent mode – nice and simple because the switch is completely unaware of the SET team and there’s no networking (no Googling for me).

All that you require is:

Like with WS2012 R2, I expect Dynamic will be the normally recommended option.

SET was designed to work well with VMQ. We’ll see how well NIC drivers and firmware behave with SET. As we’ve seen in the past, some manufacturers take up to a year (Emulex on blade servers) to fix issues. Test, test, test, and disable VMQ if you see Hyper-V network outages with SET deployed.

You’ll hear all the usual guff about System Center and VMM. The 8% that can afford System Center can do that, if they can figure out the UI. PowerShell can be used to easily create and manage a SET virtual switch.