Windows Intune is Microsoft’s client device management system that is run from the cloud. That means that you don’t install a management server; you log into a portal, install agents on a client device, and manage those devices from that portal.

Intune competes against products such as Kaseya and Level Platforms. Intune was very late to the market versus these products. And admittedly, these products have huge market penetration and more functionality. They recognised that their target market was the small/medium enterprise (SME). A savvy product manager understands that most SMEs don’t normally have an IT department; anything beyond a password reset is usually (not always) done by a service provider (selling managed IT services). Kaseya and Level Platforms figured that out, and they sell a partner driven product, allowing white labelling, partner invoicing, centralised management, etc.

In Ireland, I’d guess that a big majority of service providers are using one of these two products to manage PCs and servers on their client sites.

Windows Intune – The Past

But the real kicker, as I covered back in March 2011, was the price (I got some heat for that blog post from a certain devices and services company):

While Intune, Kaseya, Level Platforms are aimed at everywhere from the SME to Fortune 500, their core market is the SME. In Ireland, most of our companies are SMEs. Sure. we’re a small country of 4 million people, but it’s the same in Germany, the UK, France, Australia, Canada, and the USA. There are only so many CitiGroups, Koch Brothers, etc.

Fact: there is no more SBS. Microsoft isn’t making a Windows Server that is a DC, Exchange server, file/print, and Sharepoint server for that market any more. The solution for that market is “the new Office”, i.e. subscriptions of Offce365 with Office 2013 included in the package (Office Web Apps, Click-to-Run, or temporary run anywhere). If you want, you can sell a Microserver to that 75% of <25 user companies with Windows Server 2012 Essentials to give them:

Microsoft partners have been hearing the story about Office in the cloud since BPOS back in 2008 (or thereabouts – not that important). The majority of partners had no interest: Microsoft was direct invoicing the customer and that stole the customer relationship from the partner. Office365 just did not have market penetration with the market that mattered: the Microsoft partner. They’re the guys that advise, design, and implement IT for the SME. Microsoft screwed the pooch again (that’s one sore pooch!).

Microsoft got the same feedback the world over:

As of February 2013, partners will be able to resell Office 365 (with Office 2013 included) via the Open program to customers. That is a huge deal. The subscription price will also include leased Office 2013 that is installed and managed from the cloud; that means the customer gets more bang from their buck:

That means the role of the server in the smaller SME fades, maybe even disappears. Note: some SMEs will always need local storage, Group Policy, and/or LOB apps that can’t be cloud based, but this is not a back versus white world; it’s all shades of grey.  Maybe the server management functionality of Kaseya and Level Platforms isn’t as necessary any more!

The management stuff is good. The app store stuff is very good for larger enterprises that could afford to get custom apps developed for mobile devices, but that just a flashy unrealistic demo for the SME.

v4 of Windows Intune is on the way, as Mary Jo Foley reported yesterday. It will be continuing support for mobile devices (including Windows Phone), and adding Windows 8/RT support too. But here’s the big news: Windows Intune pricing is changing (and in a good way).  There will be two SKUs:

€4.89 ($6) per user per month for client device management with managed antivirus. But here’s the nice bit: The likes of Forrester says that the modern worker can have up to 5 smart devices. The per user licensing of Windows Intune covers 5 devices!  Let’s compare:

Let’s say you were a Windows Intune v2 user with a PC and laptop. Your cost was €11 per device per month. Your total price is €22. With the new pricing, you are charged €4.89 per user and you can have up to 5 devices, including PCs, laptops, tablets, and smartphones.  You just saved €17.11 per month.  Nice!

BTW, Windows Intune has always allowed partners to subscribe on behalf of customers. The idea here is that you sell a managed service and include the price of the management into your service charge.  You will be able to buy on behalf and cross charge for both Windows Intune and Office365 for your managed SME customers.

For the SME, the Microsoft solution is cloud-centric and looks like this: 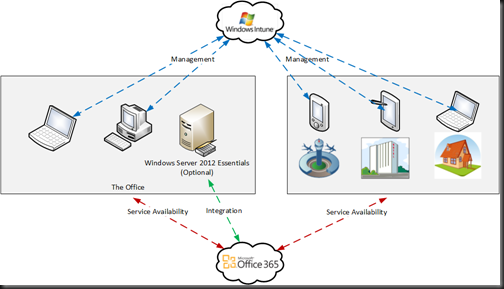 Everything is cloud connected. Cloud-based management is perfect for mobile devices (tablets on the move, smartphones not on the network, and roaming/home users). Traditional on-site management such as LanDesk or System Center Configuration Manager aren’t really that good for those mobile devices because those management solutions are designed for the WAN, not for the Internet.

Office 365 has the same benefit: the SME with less than 25 users doesn’t want a server with 12+ GB of RAM to run SBS. Sell them Office365 and give them the same basic tools and mobility that a Fortune 500 has. No matter where they go or work, they’ll always have access to their data and communication/collaboration tools.

The managed service provider wins too:

Here we’re talking about the bigger company with more complexity: 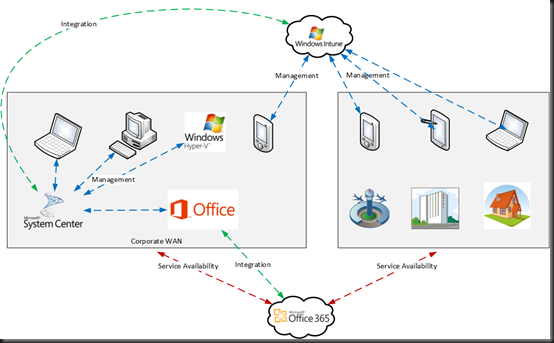 So here we see a bit of “best of both worlds”. System Center is used to deploy and manage the internal infrastructure and services on Hyper-V/private cloud. PCs and laptops on the corporate WAN are managed by System Center too.

Windows Intune is used to manage:

With SP1, System Center 2012 can integrate with Windows Intune to give IT a single console for device management.  That unification of infrastructure is one of the goals of System Center 2012, enabling easier administration (another goal).  In this design, System Center 2012 SP1 Configuration Manager will deploy software to, patch, and provide AV for the following on the corporate WAN:

Windows Intune will manage the following mobile devices from the cloud:

Office can reside in both the private cloud/internal infrastructure and in the cloud via Office365.

So there you go, Windows Intune will be:

6 thoughts on “Changes Coming To Windows Intune (And The Market)”