The Quality of Service (QoS) feature has been improved in Windows Server 2012 and this becomes a major ingredient in converged fabrics. QoS rules can be used to:

There are 3 ways that you can create QoS rules, and each type depends on the type of traffic you are dealing with and changes where the rule is applied, and what it applies to: 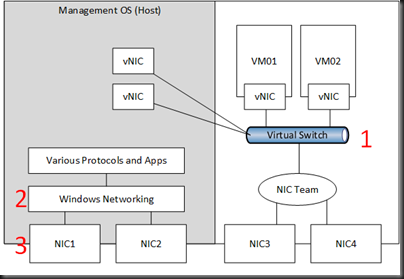 This is the simplest of the options in my opinion.  You can create rules to be applied by a QoS enabled virtual switch.  This should be used when the traffic you are dealing with is passing through a virtual switch (highlighted with red “1” above). Each rule is applied to a virtual NIC, either in a virtual machine or the Management OS. You can define a default bucket rule; this pool rule is used for any virtual NIC that does not have an explicit rule and the b/w is shared in the pool.  All of my previous PoSH examples on my blog have focused on this approach.

Maybe you have physical NICs that will be shared between roles (e.g. SMB 3.0, cluster communications, and Live Migration). These NICs have nothing to do with virtual NICs. In this case you create per-protocol rules, not virtual NIC rules. The rules are applied to network traffic as they pass through the networking stack by the OS Packet Scheduler.

Note that you can also use this approach in the guest OS of a VM.

DCB is a function of hardware, allowing you to classify and apply QoS to networking protocols using hardware instead of software. Some protocols are invisible to Windows, such as Remote Direct Memory Access (RDMA) which is used for SMB Direct. You must use DCB to apply QoS for RDMA. Actually, using DCB offers the best performance. Two notes:

It’s one thing to apply QoS on a per NIC or server level, but the network admins might want to control traffic on the LAN. You can classify and tag traffic so that QoS rules on the switches/routers can also apply QoS rules. The classification can ID protocols, ports, destination IP addresses, and so on, classify the traffic, and that classification can be used by network admins, e.g. stop the total sum of backup traffic from screwing up the host networking.

QoS, combined with NIC teaming, virtual NICs, VLANs, RSS, DVMQ, etc, all make converged fabrics possible. There’s no one right design, but there are wrong ones, e.g. trying to use RSS and DVMQ on the same physical NICs.

Microsoft has published some common configurations on TechNet, along with a bunch of PowerShell. Here are some thoughts:

I’d expect this to be an uncommon configuration, but could see it being used in very large hosting with 1+1 host fault tolerance. In this example you can see:

This will be a very common configuration, useful for clusters using SAS or Fibre Channel storage. My previous blogging has focused on this example. In this example you can see:

A twist on this example is to add 2 physical NICs for non-converged iSCSI so that you can have dedicated iSCSI switches (for manufacturer support).

This example is basically the 2 NICs without NIC Teaming example with NIC teaming. I can see this one being used where SMB 3.0 storage is required but there is no RDMA/SMB Direct being used.  NIC teaming can’t see RDMA!

The two physical NICs on the left are dedicated to the Management OS. The QoS rules classify and tag protocols and apply QoS either:

The NIC team and virtual switch are dedicated to virtual machines.

4 NICs with a standard NIC team and two RDMA NICs

This is a variation on the last example. Two RDMA NICs are being used for SMB Direct. NIC teaming must be dispensed with in the Management OS. Now DCB must be used. Rules are created to classify and tag protocols, and DCB is used to apply QoS. PFC will be enabled for RDMA if using RoCE NICs.

This example uses the flexibility of virtual NIC for the Management OS, while dedicating 100% of bandwidth of the RDMA NICs for SMB 3.0.  See the previous example notes for the 2 SMB 3.0 NICs (IP addresses, QoS, PFC,  and MPIO).

You’ll use QoS on a per virtual NIC basis that is applied by the virtual switch for the Management OS vNICs (Management, Live Migration, Clustering).

If you have reached here without reading the referenced Microsoft pages then, then don’t be an idiot: go back and read them. I’ve only covered/explained a tiny fraction of the shared information.