If you read this blog or follow me on Twitter then you know I do a lot of demos.  You might also know that my work laptop, aka “The Beast”, is pretty powerful and I’ve been using it to demo stuff like Windows Intune, Windows 8 Hyper-V, and System Center 2012 Configuration Manager.  But sometimes you need more …. like a couple of servers so you can demo NIC teaming, clustering, Hyper-V Replica, Live Migration, and so forth.  It’s one thing to lug around The Beast, but it’s a whole other deal to ship around servers and their networking!

So how am I going to demo this stuff on the road?  The answer should be be The RDS Gateway to remotely log into the environment and show it off.  Regular followers know that I couldn’t even get reliable Internet access in hotels when I was trying to log into the Windows Intune portal on a recent Intune roadshow for partners.  1 of the 3 hotels worked OK, 1 I had to use y 3G “Mi-fi” (barely got a signal), and 1 required me distracting with 1 hand while tricking with the other.  Hotel internet on this island (Belfast is actually worse than The Republic, which is surprising to me) is awful and cannot be depended on for a live demo.

So if I can’t carry servers about, and I can’t reliably RDP into them (like I should be able to), then what do I do?  Unfortunately, the answer is canned demos.  I don’t like doing this; the audience appreciates it less and I don’t get the same buzz when pressing CTRL + P to pause and un-pause a recorded video.  Though there was a lot of fun during the W2008 launch in Dublin …. but that’s a whole other Oscar-esque story.

So what tool do I use for this?  I’ve acquired a copy of TechSmith Camtasia to record videos (can do sound as well) of my demos.  Instead of doing the usual demo, I’ll play the resulting videos and pause where required to speak over them.

I needed some Hyper-V demos for a road show next week so I started recording as soon as I got Camtasia yesterday.  It was so easy to use.  It wouldn’t work on Windows Server 8 but I wasn’t surprised … it’s a whole new OS still in Beta.  I’m sure that support will come in time.  Instead, I installed it on my Windows 7 installation on my laptop, RDPd into my server and recorded.  Recording and editing was such a breeze.  I wish everything was this intuitive and easy.  Pick your screen selection (full screen or area), sound or not, hit record.  Stop the recording, save the raw data, and then edit to clip out bits where required.  I’ve used this to clean up the start/ends and to trim out the progress bar stuff that kills precious time in a presentation.  You then can “produce” a final video in a size/quality of your choosing depending on purpose (presentation, web, etc).  I recorded (set the laptop resolution) in a projector friendly resolution of 1200 * 768; the natural 1900 * whatever would have produce a few dots on the screen for viewers of the presentation.  The resulting MP4 files were actually only a few MB which is great.

I tweeted that I was recording with it and almost immediately I was asked if I’d be sharing videos.  Yeah, I will – after I’ve done the partner road show next week – there’s no audio so you won’t learn much but you will see a few Windows Server 8 things in action I suppose.

Anyway, based on my experience so far, Camtasia has been a nice acquisition.  I haven’t even learned what it can actually do beyond the basics that I’ve used it for.  I expect there’s much more! 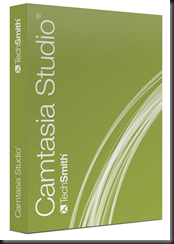