Windows Intune was originally launched to the sound of silence. This was because it was too expensive and it didn’t really do what it needed to in the market that Microsoft was pushing it to.

How the market originally reacted to Windows Intune

The product gained features as a mobile device management (MDM) solution that is integrated into your on-premise network. The packaging and pricing were also restructured to make Intune much more attractive.

But one problem remained. Intune was sold only directly to customers, and not through the channel. This is a huge deal breaker for partners … the people who actually implement Microsoft solutions in the majority of cases for small, medium, and large customers.

Today is the first day that you can buy Windows Intune through volume licensing. That means a partner can buy the software/service from a distributor (at a reduced price) and sell it to their customer (at the regular price). Now the partner has a reason to care about Intune (cold reality: sales people sell toasters at a profit and don’t give a flying monkey’s you-know-what about solutions).

Will availability help Intune? In my opinion: yes. We have been getting calls from partners over the past few weeks about this. History (Office 365) tells us that availability through VL not only gave MSFT a new VL sales income, but it increased MOSPA (direct) sales – that’s because the partners were invested in the ecosystem and sometimes a direct sale is best for a customer scenario.

BTW, this is another product I expect will be renamed to Microsoft Intune. It does cover Windows, Windows RT, Windows Phone, but also iOS (phone and tablet) and Android (phone and tablet). And long term, it would make sense if it merged or consumed System Center Configuration Manager with just proxy/auditing/distribution points placed on-site.

The new version of Windows Intune is not actually called “Wave E”.  I found a presentation by Microsoft Norway that calls the latest release “Blue/Wave F” 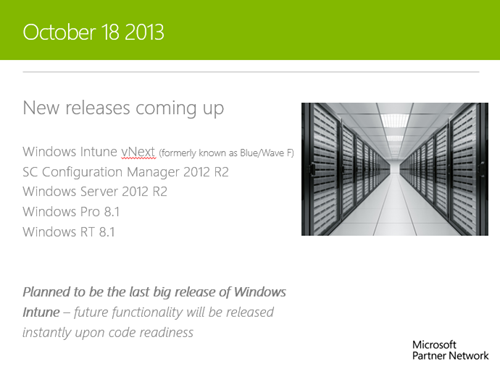 Some of the slides hint that Intune is doing single sign-on for BYOD.  That’s not strictly true; that functionality is accomplished via new functionality in WS2012 R2:

Intune can make use of single sign-on for the end user/admin experience to secure, apply policies, audit, remote control, offer support, and deliver apps to Android, Windows (real, RT, and Phone), and iOS.

Intune has pretty much evolved into Microsoft’s mobile device management (MDM) solution, also equally capable of managing the traditional on-premise PC.  Intune gives you a manage-it-anywhere platform that can control devices directly or through System Center Configuration Manager (like an extension of SCCM into the cloud for integrated MDM).  It’s either your BYOD management system and/or your remote device management system, partnering with the advancements in WS2012 R2.

You can find out more about the new functionality in Windows Intune in this post.

A short post: Microsoft has summarised the changes to Widnows Intune here. Remember, the cost of licensing has come way down, Software Assurance is now an option, and it is per user (with 5 devices per user) rather than per device now.  That’s removed the biggest blocker to Windows Intune adoption.  EAS (and onsite Exchange) is not required to manage Windows or iOS devices (still appears to be the case for Android). Windows 8/RT are now supported with a Windows App available in the Store. Windows Intune can be managed from the System Center 2012 SP1 ConfigMgr console.

New customers will get immediate access to new functionality. Existing users will have to wait for MSFT to upgrade their accounts.