I took a break from these posts last week while I was at TechEd, and then had work catch up to do this week. Let’s get back a rockin’. There is a distinct tendency towards cloud and automation in the news of the last week. That should be no surprise.

Confusing topic for many. The guys are very experienced in the real world so a good session to take notes from and share.

YOU NEED TO UNDERSTAND YOUR TARGET

Concepts of the network in SCVMM

Marc asks who has used VMM. Almost everyone. Who has done bare metal deployment: Very few. Who was successful first time: one brave person puts his hand up (I mock him – seeing as he is a friend).

Note that there is no need to do anything special to enable NVGRE. No subnets, logical networks, or anything else. A check box was left checked to allow NVGRE to be used when creating the logical network.

So now we have two logical networks: Management and Cloud Network. The Cloud Network appears to be used for the PA Space. 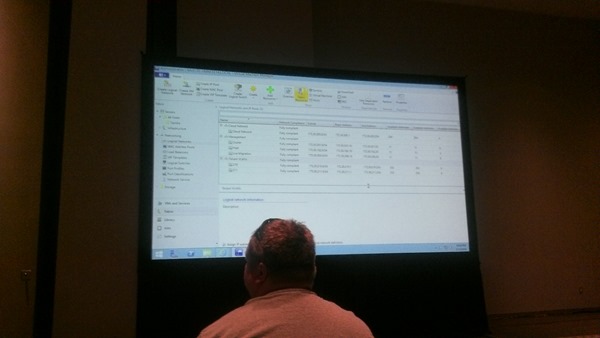 These VLANs appear to be used for tenants.

Note that for VMM to create a team, you need to create a logical switch. BAD! Needless creation of virtual switches and limits things like RDMA. Complet convergence also not good for some storage, e.g. RDMA or iSCSI storage. Might do some convergence and non-converge your storage networks.

Note: also required for NVGRE, unless you want to go to PowerShell hell.

The design they are deploying: 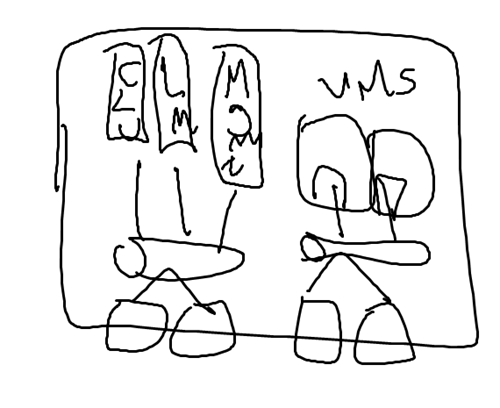 What he’s done: configure the above two network teams from the diagram and defined which networks will pass through the respective teams. 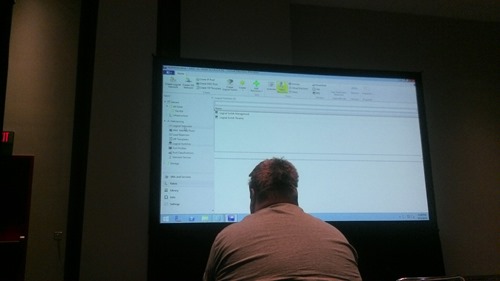 Converging things like SMB 3.0 or Live Migration through a logical/virtual switch disables RSS so you limit 10 GbE bandwidth to 3.5 Gbps or thereabouts. Can create multiple management OS vNICs for SMB multichannel, where VMQ dedicates a queue/core to each vNIC.

My approach: I do not converge my SMB/cluster/storage rNICs. They are not teamed, so they are basic logical networks. No need then for logical switch.

I am live blogging this session. Press F5 to get the latest updates.

Bob Combs and Greg Cusanza are the speakers. Each are PMs in the Windows Server data centre networking team.

The scenarios that they’ve engineering for:

The extensible virtual switch is the policy edge of Hyper-V. Lots of built in features such as Port ACLs, but third party’s extend the functionality of the virtual switch too, including 5nine.

Those port ACLs were upgraded to Extended ACLs with stateful inspection in WS2012R2. The key thing here is that ACLs now can include port numbers, not just IP addresses. This takes advantage of cool design of vNIC and switch port in Hyper-V. The rules travel with a VM when it migrates. That’s because the switch port is an attribute of the vNIC, not of the vSwitch. Policies apply to ports so policies move with VMs.

A few people in the room know what RSS is. About 90% of the room are using NIC teaming. About half of the room have heard of Hyper-V Network Virtualization.

Greg takes over. Greg shows a photo of his data center. It’s a switch with 5 tower PCs. Each PC has 2 NICs. 2 hosts, with virtual switch on the 2 NIC team. Host1 runs AD, WAP and SPF VMs. Host 2 runs VMM and SQL VMs, and some tenant VMs. One storage host, running iSCSI target and SOFS VMs. 2 VMs set up as a Hyper-V cluster for the HNV gateway cluster. There is one physical network.

Note that the gateway template assumes that you are using SOFS storage.

The host networking detail: Uses vNICs for management, cluster, and LM. Note that if you use RDMA then you need additional rNICs for that. He’s used multiple vNICs for the storage (non RDMA) for SMB Multichannel. And then he has a vNIC for Hyper-V Replica.

VMM uses logical networking to deploy consistent networking across hosts. Needed for HNV.  Uplink port profile creates the team. Virtual switch settings create the virtual switch. Virtual adapters are created from port profiles. If a host “drifts” this will be flagged in VMM and you can remediate it.

Remember to set a default port on you logical switch. That’s what VMs will connect to by default.

Then lots of demo. No notes taken here.

The HNV gateway templates are available through the Web Platform Installer. The 2-NIC template is normally used for private cloud. The 3-NIC template us normally used for public cloud. Note, you should edit the gateway properties to edit the network settings, admin username/password, product key, etc. During template you should edit the VM/computer names of the VMs and their host placement. They are not HA VMs. Guest clustering is set up within the guest OS. This is because guest clustering service HA is faster to failover than VM failover (service migration is faster than guest OS boot up – quite logical and consistent with cloud service design where HA is done at the service layer instead of fabric layer).

Here’s the news for the last 24 hours. I suspect things will remain quiet until the keynote at TechEd. Even then, I’d expect news to be limited to cloud services.

I recently presented in the MicroWarehouse and Microsoft Ireland road show to Irish Microsoft partners on the topic of the Cloud OS, comprised of Azure, Windows Server 2012 R2, Hyper-V, and System Center 2012 R2. You can find the slide deck below.

The big news yesterday was the general release of the new patch for IE on XP. Personally, I think this is a stupid mistake by Microsoft, and it will lead to some laggards to reason that Microsoft has reversed course on the end of support. Microsoft can comment all they want; most people never read blogs, press, or attend events. The mistake has been made, and it was one of the dumbest releases since Bob.