I visited my employer’s stands at the Retail Trade Show in Dublin this week. I already knew most of the stuff there, but I got to put my hands on one of the new ultra-low spec Windows 8.1 “Update 1” tablets. ICYMI, the April 2014 Update for Windows 8.1 enables OEMs to sell lower spec machinery.

For example, a Windows install is much smaller. That means you can sell a Windows tablet, and that’s x86 Windows, not Windows RT, with 16 GB of storage. 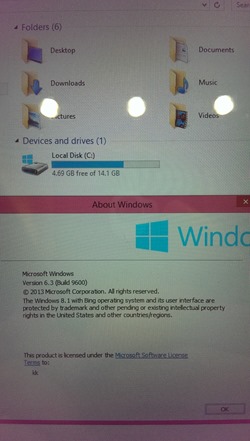 And the machine can have just 1 GB RAM.

The machine I played with was a Win’Tab8. I don’t know who the manufacturer was (I think they were French) and I’m not in the office to find out more info. It was an 8” yellow tablet. Thin and light as one would expect. And I believe it was quite cheap (maybe sub €200).

This tablet did have 16 GB storage, micro-SD expansion, an Intel Atom 4-core CPU, and 1 GB RAM. There was a micro USB port and a dedicated power socket (I like that!). I don’t know what the battery life is like. Just over 4 GB of the storage was free. The RAM was under pressure; while I’m OK with the small amount of storage for a consumption machine (I hope MSFT embraces expansion storage like on Android), I am not sold on tablets with less than 2 GB RAM. The demo machine was not logged in with a Microsoft ID so I couldn’t install something from the Store. But I played around and it seemed to perform pretty well.

Expect to see these kinds of low spec/price Windows tablets in retail stores in the coming months.

I’ve just re-read a post I wrote in 2010 about the future of Steve Ballmer. My two topics of focus were Windows Phone 7 (released that day) and the lack of a Windows tablet at the time.

I thought WinPho would struggle behind iOS and Android, mainly because of apps. I was not wrong. Things have improved, but there’s still issues with app quality and availability.

We now know that Ballmer bought into the Sinofsky plan (sounds like some dodgy French plan to keep out invading forces, and we know how those tend to work out). Windows 8 came, Windows 8.1 came, Windows 8.1 Update 1 came, and still Microsoft struggles in the tablet market. I thought (and I was not along) that, despite everything, Microsoft should get WinPho working on tablet devices. Instead we got the confusing and failed Windows RT, which is now being killed off through a merger with Windows Phone for ARM devices.

Oh yeah, I completely underestimated the impact of smartphones and tablets on the consumer market.

I know very few businesses deployed Windows 8, but any "upgrade" that requires a wipe & replace is not a service pack. However, that’s what Microsoft now thinks, and that’s had an impact on the Windows 8 support policy. Someone in Redmond needs a quick kick in the nether region, because coffee clearly won’t be strong enough.

And in other news on this slow morning, Steve Ballmer binged on a TV show featuring one of Hollyweird’s plastic surgery victims. Yeah; it’s always a slow period in the build up to big announcements.

I’m sick of this BS.

Microsoft is investigating behavior in which systems may crash with a 0x50 Stop error message (bugcheck) after any of the following updates are installed:

This condition may be persistent and may prevent the system from starting correctly.

If you are affected by any of the above then the repair process (see Known Issue 3) is an ungodly nightmare.

This is exactly why I tell people to delay deploying updates for 1 month. That’s easy using SCCM (an approval rule will do the delaying and supersede for you). WSUS – not so easy and that requires manual approval, which sadly we know almost never works.

Feedback, private and public from MVPs hasn’t worked. Negative press from the tech media hasn’t worked. What will, Microsoft? Nadella oversaw this clusterfrak of un-testing before he was promoted. Is sh1te quality the rule from now on across all of Microsoft? Should we tell our customers to remain un-patched, because catching malware is cheaper than being secure and up-to-date? Really? Does Microsoft need to be the defendant of a class action suit to wake up and smell the coffee? Microsoft has already lost the consumer war to Android. They’re doing their damndest to lose the cloud and enterprise market to their competition with this bolloxology.

I think we can call today’s issue “What’s New in Azure”: 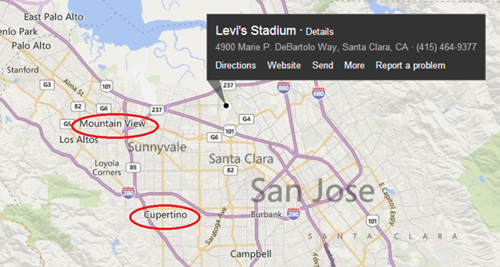 What tablet did I see the 49ers using on the side line in a preseason game against the Ravens last night? 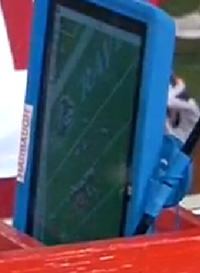 Hmm, that’s not the Apple square button and it sure aint Android. The announcers went on to mention that the NFL has a sponsorship agreement with Microsoft Surface. Note the stylus? I reckon that’s a Surface Pro (not the 3 based on the shape). Apparently the league only allows side line tech such as this for analysing still pictures (a full field shot is taken just before and after a play starts for later analysis by coaches and players).

Previously a junior staff member printed out booklets of black and white photos and ran them to the coaches/players on the side line. That took at least 30 seconds. They must be a mess to use and keep organised. Now colour images (see above) are transmitted straight to the Windows tablets and presented in a tiled touch interface. You can see below that some coaches like the new system, and some do not: 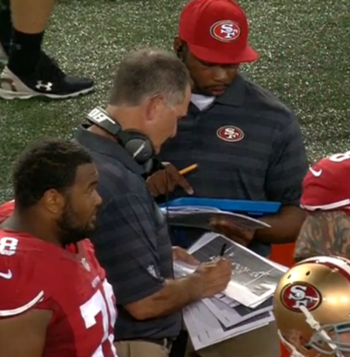 Interesting to see a team such as the Niners, who have just built the most technology centric stadium on the planet in the shadows of Apple and Google, are using Windows and the Surface.

Microsoft recently clarified their documentation by releasing a specific page to list the supported guest or virtual machine operating systems on Windows Server 2012 R2 Hyper-V (including Hyper-V Server 2012 R2) and Windows 8.1. This page lists the supported Windows client and servers OSs. On the list you will curently (21 July 2014) find:

Remember: “supported” and “it works” are two very different things in the Microsoft world:

Microsoft DOES support a wide array of Linux distributions/editions/architectures. There is a specific support page for Linux because of the complexity that the variety of distributions introduce. Newer releases come with the Hyper-V Linux Integration Services (LIS) as a part of the install. Older ones require you to download the LIS and install them into the guest OS. On the list you will curently (21 July 2014) find:

The support pages (particularly the Linux ones) are subject to frequent change so I suggest that you use the links in this post as a jumping point to get to the newest release by Microsoft. I will not be updating this post to reflect the latest changes – this is a blog, not a documentation site.

I work for a Toshiba distributor so every now and then they let me put my hands on something new … or sometimes something that isn’t coming out for quite a while. A few months ago I got to hold and play with the new Toshiba 8” and 10” Encore 2 tablets. Both were pre-production models. I just got my hands on a production version of the 8” Toshiba Encore 2 (WT8-B-102), running Windows 8.1 with April 2014 Update.

To be precise, this is running Windows With Bing, the free (to OEMs) edition of Windows that is hard coded with Bing as the search engine. The idea is that instead of OEMs paying for Windows and then taking money from another search engine to set them up as the default, the OEM gets a free copy of Windows, and this brings down the cost of the h/w for the consumer. 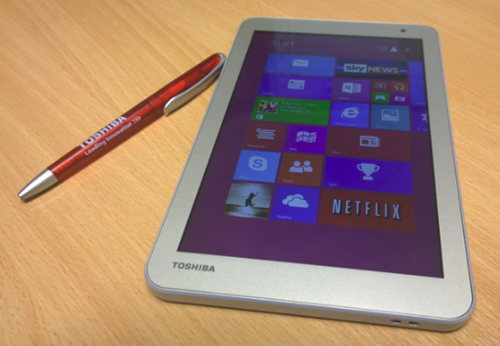 This is a consumer tablet. It has an Atom processor so it does not run the doomed Windows RT. It’s running a 32-bit copy of Windows 8.1. There is 1GB RAM and 32 GB of storage … don’t fret! This is the April 2014 version of Windows so it features the new magic installation that consumes a lot less space. This tablet has just over 20 GB free out of the box. That’s a big improvement over the original 32 GB Encore which I own. And 1 GB is enough for the light weight consumer stuff that you’ll do with this tablet: apps.

The tablet is slimmer than the Encore 1 and has a smooth back. It is grey instead of “gold”. Also, the Windows button has moved to the top edge, instead of a capacitive button on the front-bottom; I guess that reduces costs. 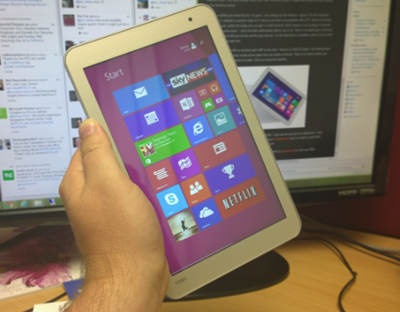 The Micro-HDMI port of the Encore 1 is gone – cost savings for the masses, I guess. It’s not a big deal; Windows 8.1 defaults to portrait mode on 8” devices and that’s incompatible with a TV. There is an audio jack on the top and an open Micro-SD port on the side for easy access. On the base there is actually a place to tie a wrist cord if you should want one.

There is a normal micro-USB 2.0 port, unlike the dodgy one you get in a Dell Venue 8, which breaks if you do plug in a normal USB cable “upside down” – which the Dell unfortunately allows you to do. One teeny design thing I don’t like: the included power chord is angled and obstructs easy access to the Windows button. You can use any old (Windows or Android) phone charger cable and that solves the issue. The box also includes a USB dongle; with this you can plug in your USB stick/drive into the tablet and it also has an additional micro-USB port so you can continue to power the tablet while using a USB device.

The cameras are 1.2 MP on the front and 5 MP on the back. There is no 3G/LTE option – the thinking here is that people already have mobile phone plans and can enable a hotspot. There is no stylus (above you see a normal pen for a sense of scale) – this is a consumer machine. I am told that the retail price in Ireland will be around €220 – I only see our buy price as distributors. I have seen this tablet for sale for under €250 on Irish online stores. Amazon.com has it on sale for under $240. Amazon UK has it for under £180. It’s not on Amazon.de yet.

It’s a nice tablet at an affordable price, and has made form factor improvements over the first version. The biggest improvement, though, is the additional free storage capacity in the 32 GB model, thanks to Windows 8.1 April 2014 Update. The only real concern is apps – which is outside of Toshiba’s (Lenovo, Dell, Asus, etc) control, and it’s something that Microsoft must do a better job at sorting out. Either the apps suck (Kindle reader for Windows) or don’t exist, and there are still too many cra-apps in the hard-to-navigate Windows Store.