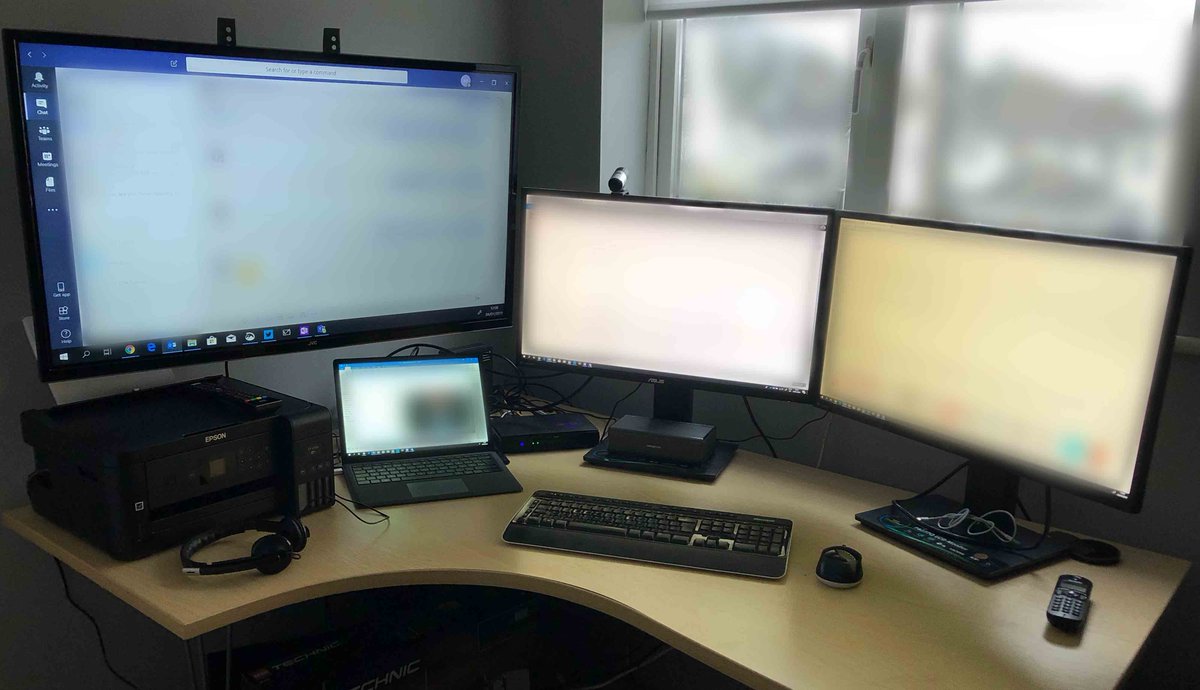 It’s July now, and it’s just over half a year (just over 7 months to be more accurate) since I started a new job where I work from home. Here are some thoughts and lessons from my experience.

In my previous job, I was mostly in the office. I had a certain amount of flexibility where I could work from home to get things done in peace and quiet, away from the noise of an open-plan office, but mostly I commuted (by car, because there is no public transport option from here to the outskirts of Dublin where most private sector employees work) with my wife every morning and evening. We worked together – having met at the office – we were “podmates” for years before she moved desks and we started going out. I was happy in that job, and then along came Innofactor Norway who offered me a job. A big thing for me was not to travel – we have a young family and I don’t want to miss life. It was agreed and I changed jobs, now working as a Principal Consultant, working mostly with Azure networking and security with large clients and some internal stuff too.

This is not my first time having a work-from-home job. I worked with a small company before where they eliminated the office from expenses to keep costs down. It suited everyone from the MD down that we could work from home or on the road – one salesman used to camp out in a hotel in west Dublin, order coffee all day, and use their WiFi while having meetings close to potential customers’ offices. I worked from my home in the midlands. I was single then and worked long hours. I remember one evening when I’d ordered a pizza. The poor delivery guy was stuck talking to me, who hadn’t spoke to anyone in a week, and was trying to get away from this overly chatty weirdo. I had a sort-of-office; it was a mess. I ended up getting into the habit of working from the sitting room – which was not good. It was uncomfortable and there were entertainment distractions.

And important part of this job was going to be the work environment. I have an office in the house, but had rarely used it. A lot of my writing work for Petri or even writing courses for Cloud Mechanix was actually done on the road, sometimes literally while in the car and waiting for my daughter outside ballet or gymnastics classes. The office needed work so I cleared it out completely, painted and redecorated, and then set up all the compute from scratch. A nice fast PC with dual monitors was isntalled. I added a smart TV from the new year’s sales to the wall for YouTube/conference streams, as well as an extra screen (the MS adapter is much better than built-in screen casting). For work I bought a new Surface Laptop 2 (black, 16 GB RAM, i7) with the Surface Dock. And the folks in my old job gave me a present of a StarTech 2 port KVM switch, to allow me to share the keyboard and monitors between my NUC PC and Surface Laptop. The Laptop is my primary machine with Microsoft Whiteboard and the pen being hugely important presenting tools. The desk in the above picture is gone – it was purchased 3 years ago as a temporary desk when we moved into our house. I replaced it with a white IKEA L-shaped desk because the old one was squeaky and annoying me during Teams calls. Next to be replaced will be the chair.

The two tools I use the most are Microsoft Teams and the browser.

Teams is the primary communications tool at work. Very little internal comms use email. Email tends to be for external comms or some sort of broadcast type of message. I work with another Irish MVP, Damian Flynn. We’ve worked on a couple of big projects together, which has been awesome, and it’s not unusual for us to have a window open to each other for most of the day, even if we’re working on different things. It’s like we’re “podmates” but with half the width of Ireland between us. I’ve really noticed the absence this week – Damian is on vacation and most of Norway is on vacation too. I’m starting my second week with barely any conversation during the workday.

Working in cloud, obviously the browser is important. I started off in Chrome. Then I discovered identity containers in Firefox and I switched. However, I had to use Edge too – our time keeping is (how we bill each hour) is done in CRM and it won’t work in a non-MS browser. I was having problems with Teams randomly dropping calls. I even was considering switching to Slack/Skype (consumer) for my work with Damian. Then I realised that I was running out of RAM and that was killing Teams calls. The culprit? Firefox was eating many GBs of RAM. I had started to play with the Chromium Edge preview (aka ChrEdge) and was impressed by the smoothness of it (particularly scrolling for reading). When I realised how it had implemented identities (which is not perfect) I made the switch. Now ChrEdge is the only browser running all of the time and Teams is not losing calls.

Of course, I do a lot of JSON, so VS Code is nearly always open all of the time too. With that, Git client, and Azure DevOps, I have a way of doing things at scale, repeatedly, and collaboratively.

I am quite strict with myself, as if I am in an office, even though “my office” is half way up the west coast of Norway. I’ve heard presenters on home working talk about getting on a bike or in a car to drive around the block and “come to the office” with a work mentality. I’ll be honest, I might not even put on pants in the morning (kidding!) but I do clock in at 8:00 every morning. By the way, Norwegians start work before most of Europe is even awake. I’m the “late riser” in the company. Sure it’s 9am Norwegian time when I start, but they’ve already been at work for hours when I start. I have a routine in the morning, getting the kids ready, having breakfast, and bringing a coffee into my office. I have a morning start routine when there isn’t an immediate call, and then I’m straight into it. My lunch routine involves a bike ride or walk, weather permitting, and a quick lunch, and then I work the rest of my hours. I try to work longer hours at the start of the week so I can finish early on Friday – it’s amazing how a 2 day weekend feels like 3 days when you can finish just a little bit earlier.

Being at home means I’m also here for my kids. I can pick up our youngest earlier from day care. Our eldest can be brought to training or football games – and for checkups after breaking her arm – without taking time off from work. All are nice perks from working from home and having flexible hours/employer. This week, my wife is away at Microsoft Inspire. Without the time waste of a commute, I can use that time to do work around the house and keep on top of things. Soon enough, our youngest will start pre-school and I will be able to bring her there and back again. And when school starts, she’ll be walked to the end of our road, where the school is, and back again. Even when things are normal, there are times when I’ll have dinner started before my wife gets home – my culinary knowledge and skills are limited so I won’t subject my poor family to me cooking every day!

I’ve mentioned that I am using my lunch break for exercise. I’m overweight – like many in the business – a byproduct of sitting 8-10 hours a day. I started cycling 2-3 times a week spring of last year and put the bike away for the winter. It came out again this spring, and I was on it 2 times per week. II needed more time on it, so I’ve started going out every day. Sometimes I’ll do a long/fast walk to break it up, giving me a chance to catch up on podcasts and audio books.

With less time wasted in traffic jams and more time focused on doing productive work, I am sure that I am more productive at home. Study after study have documented how bad open plan offices are. In the quiet of my office, I can focus and get stuff done. In fact, this time lead to me doing some business changing work with Damian. I’m less stressed than ever too.

If you can find a way to work, have reliable broadband, and have an employer that has realized how a happier employee is a more productive one, then I couldn’t recommend this style of working enough.