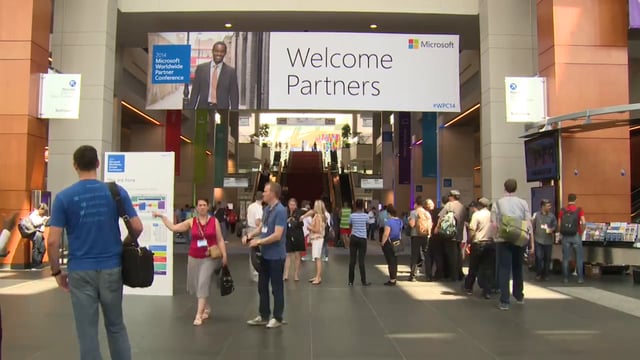 A video about YouthSpark. Way to talk to partners. promote YouthSpark where there’s free licensing and partners get zip. Then there’s a performance with people drumming on ladders.

He comes out wearing a brand new partner scarf. Congrats go out to the partner of the year winners. Oooh it’s like the Olympics!!!!

IDC says that cloud business will be $200 Billion by 2018. There’s the agenda. Cloud. Get with it or get out. They’re sharing 20 scenarios with best practices for Azure/cloud deployment.

Here is the keynote agenda for this week: 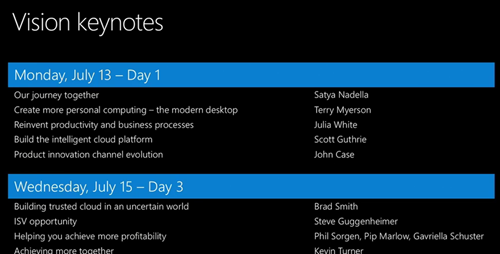 User/cloudiness/mobility fluff. Then Windows 10. Then speed dating with Office 365. Red Shirts talking about Azure, and then something about productizing the cloud.

Now on to a Cortana video. Everyone outside the USA can sleep now. Zzzzzz ….

Bt seriously, they do stress the change in partnership and public opinion of Microsoft under Satya Nadella. 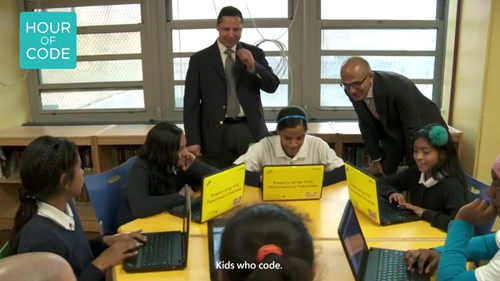 What makes Microsoft unique is the partner ecosystem. 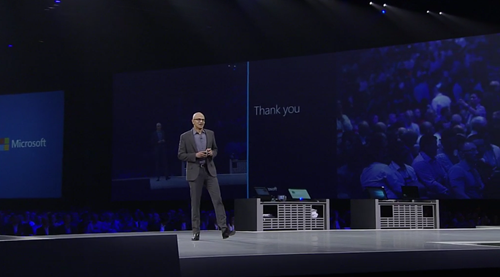 Customer expectations and technologies have changed, but Microsoft uses WPC to reaffirm their commitment to partners. He wants to set out the mission and strategy with an anchoring ambition.

Mission: Empowering every person in every organisation to achieve more. They went back into their history to discover a sense of purpose (a PC on every desk in every home, etc). Now it’s … mobile first cloud first world. There is no other ecosystem that is solely built to enable customers to achieve greatness through digital technologies. They care about individuals and organisations, and they view the intersection of these as critical.

Some key attributes to mobile first, cloud first. We’ve heard this stuff before so I’ll get something to drink.

Ambition 1: Reinventing productivity and business process: bring together collaboration, communications, etc. This is O365, Dynamics, etc, an integrated set of extensible tools. Current solutions on-premises have created barriers to productivity. Microsoft wants you to use their tools in work and in life.

Scenario: customer might be leaving. Julia needs to work with Steve. Julia opens Gigjam to an empty Canvas. Cortana integration for the USA. They query information on the customer. They pull in emails with the customer onto the canvas. She draws a circle around stuff on the canvas, and draws an X on stuff she doesn’t want to share. Julia can see her entire data, and Steve can only see the selected subset. They share stuff on Surface Hub and on iPhone. 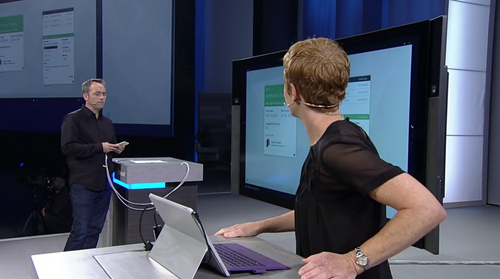 Demo gods kick them a bit, and eventually they get stuff shared properly to the iPhone. Steve “loves his iPhone” – yes, a Microsoft person said that. Steve shares some of the product roadmap from another service with Julia. She is seeing information from an app she doesn’t have access to. On a Surface Hub, all their shred data is on screen so they can collaborate. Julia shares stuff with another guy, who is automatically called on Skype. He shares some info and gets out of the call/meeting. Julia delegated stuff to another person. That person generated information, Julia review it, and shares it.

This was something new. It wasn’t communications; it was work sharing. There was no screen sharing; it was data distributed by an app. 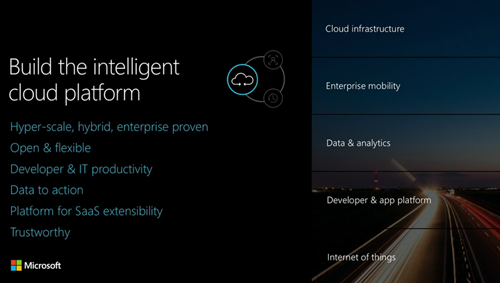 Usual message here. There’s more Cortana shite for the 4% of the world that lives in the USA. There’s talk about “any organization on the planet” but Cortana works in 1-10 countries only.

Ambition 3: Personal computing. Windows 10 will usher in a new eara of more personal computing. Continuum will transform our usage of devices. I 100% agree. The phone is already the #1 personal device. Windows Mobile 10 can make that device your PC …. but will people end up using iOS or Android instead when similar features arrive there? Microsoft needs to put Windows Phone handsets into business users, IMO, and that means serious changes to their channel.

Here’s a demo of how AutoDesk 3D modelling can work on HoloLens. To test a design they normally create a slow and expensive 3D print. Now they can use HoloLens with their same design workflow with the same tools. On goes a HoloLens. There’s a small motorbike on Dan’s desk. He can change the bike directly on the model using his mouse. He can make it small or big with the wheel. He moves the  bike around. They have a real bike on the stage. They overlay a new design onto that bike. They change the colour schemes. 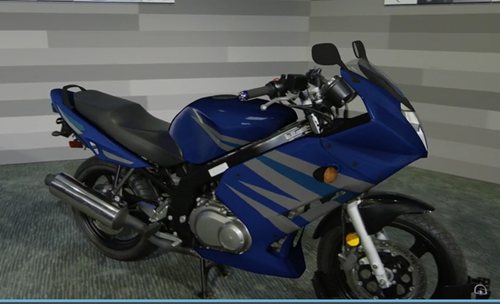 Above is the overlaid bike. He adjusts the mirror sizes.  The image is incredible. A remote team leaves notes on the bike, requesting design changes.

Satya winds up his presentation. Some intellectual property is shown for a couple of minutes, and we are shown a video of Sea Otters. I am not kidding. 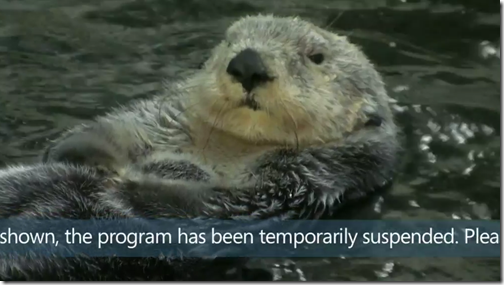 Myerson says that “this video” is why we are here today. Sea Otters!

July 29 when Windows 10 becomes broadly available is just a few weeks away. On that day, around the world, people will not get to use Cortana. Oh, sorry, Microsoft will be asking the world “what will you upgrade” and by that, they mean community efforts. They want to celebrate the people who empower others.

Lots of old stuff rehashed. Out comes Bryan Roper with a hat. I guess he’s Cajun or something. He’s very cheerful. Laissez les bon Windows rollez. Less than 6% of users use ALT + TAB. Who is this dude and where has Microsoft been hiding him? This is much better than the usual dull Windows 10 demo. Real time co-authoring in Word 2016. This will be even great for partners when writing a proposal with multiple authors. Oh it all goes wrong when he demos Cortana. I tune out.

Now there’s a live demo of Phone & Continuum. He’s editing an Excel spreadsheet on a monitor using keyboard and mouse, off Excel running on a phone. That’s made possible by the Universal Apps platform. 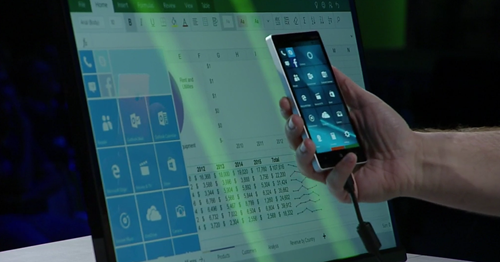 A familiar HoloLens holographic apartment appears. The demo is identical to what we’ve seen before.

On to security. Virtual Secure Mode (Enterprise edition) of Windows 10 secures secrets using silicon and Hyper-V. Modern hardware enables modern security features. Roanne Sones comes out to talk devices. She starts off on IoT. There’s a demo of DeviceGuard, preventing a USB drive being put into a POS system that policy only allows to use USB retail hand scanners. Another demo: a micro-kiosk – the things used in the USA for credit card signing. To “hack” it, you open it up and steal the system media card. She pops it into a PC card reader and the drive is encrypted using BitLocker – the software cannot be compromised via out-of-band. She’s created her own malicious card instead. She plugs it into the micro-kiosk, and the boot fails. Secure boot has locked down the boot process so only signed images that the business owns can boot up.

The Anomaly console in Azure shows that there were problems in the micro-kiosk. The IT pro can investigate the device. 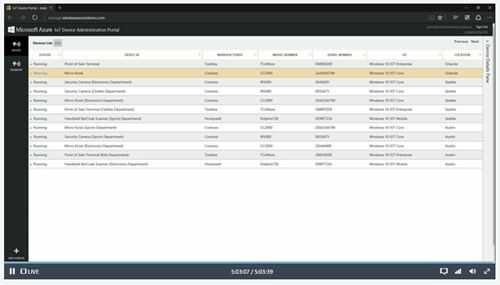 Back to Terry. He starts talking about selective patching. A new solution is needed. Windows 10 has a “flexible” update model that works with all kinds of devices. Windows as a Service provides continuous security and feature updates. Users can opt into rings. Some want to be first, some want to be cautious. Those who go first will be the “testers”. Windows 10 Enterprise will have the “long term servicing branch” for things like industrial devices. Here you want just security fixes, and lock down features for stability. End user devices at work want the innovation they see at home and IT pros need control. Windows Update for Business will offer this balancing act… handling rings, blackout periods (for sensitive times) for free – feature and security updates.

That’s a wrap from him. Now a video about the word changing and innovation.

I have not a hope of keeping up here.

There is an E5 plan of Office 365 coming, along with a cloud PBX. Bring-your-own key is coming to O365. SharePoint 2016 is code from the cloud, and is being designed for hybrid solutions. OneDrive for Business … lots of new stuff – I hope that includes the sync engine. Ah – there is apparently, along with auditing, reporting, and DLP. The OneDrive consumer experience is coming to it. All this in H2. 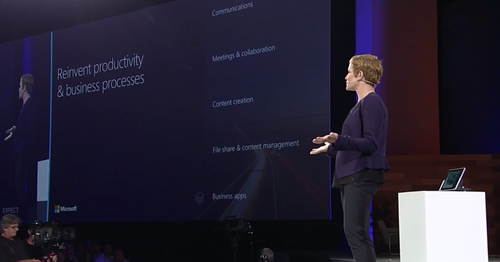 A demo of Delve, and content from external services like SalesForce is present there. Delve is based on Office Graph. Seems quite similar to what we saw at Ignite. New stuff coming in the next year: 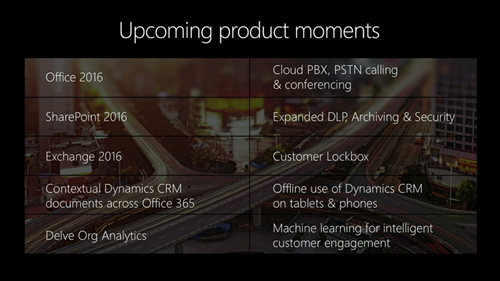 Here comes a barrage of new Azure features in a red shirt. He’s going to talk about Satya’s 2nd ambition to build an intelligent cloud platform. 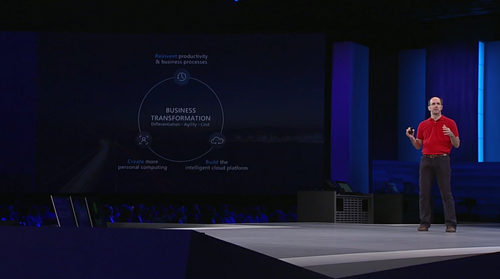 Customers will look to SaaS for faster time to value. IaaS and PaaS will offer opportunities to re-engage with customers and improve business processes.

There will be 5 more Azure regions opening in the next few months. Over 3200 solutions in the Azure Marketplace. 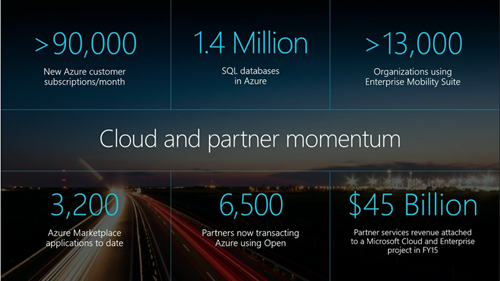 Great numbers, but remember that adoption are not sales. Some partners are brought out to talk about the different kinds of solution they are deploying for customers in the Microsoft cloud: open source in the Azure Marketplace, PowerBI, and cloud reselling (Rackspace). I catch up on lost sleep. We’re over 3 hours now. The coffee just isn’t strong enough.

They’re pushing the CSP program, which isn’t a surprise.

We have just crossed the 3 hour mark. 1 more presentation left.

Some stats on Office, CRM, and Azure: 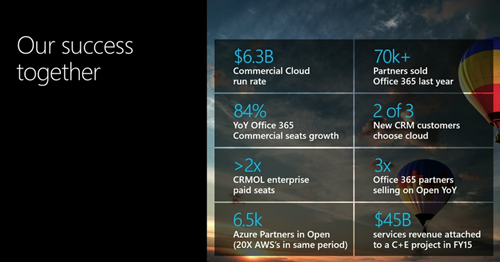 Azure has 20x more customers in Open than AWS has in their similar program. Azure in Open launched August 1st of last year. The channel is in upheaval. The best partners in O365 are at 1.5x revenue over standard partners, and have higher margins, etc.

I guess lots of people left before now. He thanked people that stayed. And he wraps up at 5:02 PM, 13 minutes after he started, and 3 minutes over the promised 10 minutes.

John announces that WPC 2016 will be in Toronto. Lead balloon. No applause. Why? The reviews on the venue from the last time were terrible. The rooms at the venue were too small and feedback from people I know was that they wasted a week there because they got into so few sessions. I wonder if Microsoft can tear up that contract?

And that’s a wrap.