Here are my notes from the recording of Microsoft’s New Windows Server Containers, presented by Taylor Brown and Arno Mihm. IMO, this is an unusual tech because it is focused on DevOps – it spans both IT pro and dev worlds. FYI, it took me twice as long as normal to get through this video. This is new stuff and it is heavy going.

Containers move towards a “many applications per server” model, where that server is either physical or virtual. This is the fastest way to deploy applications.

An operating system virtualization layer is placed onto the OS (physical or virtual) of the machine that will run the containers. This lives between the user and kernel modes, creating boundaries in which you can run an application. Many of these applications can run side by side without impacting each other. Images, containing functionality, are run on top of the OS and create aggregations of functionality. An image repository enables image sharing and reuse. 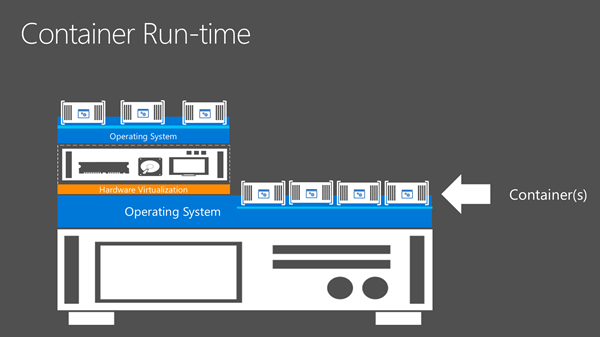 When you create a container, a sandbox area is created to capture writes; the original image is read only. The Windows container sees Windows and thinks it’s regular Windows. A framework is installed into the container, and this write is only stored in the sandbox, not the original image. The sandbox contents can be preserved, turning the sandbox into a new read-only image, which can be shared in the repository. When you deploy this new image as a new container, it contains the framework and has the same view of Windows beneath, and the container has a new empty sandbox to redirect writes to.

You might install an application into this new container, the sandbox captures the associated writes. Once again, you can preserve the modified sandbox as an image in the repository.

What you get is layered images in a repository, which are possible to deploy independently from each other, but with the obvious pre-requisites. This creates very granular reuse of the individual layers, e.g. the framework image can be deployed over and over into new containers.

A VM is running Docker, the tool for managing containers. A Windows machine has the Docker management utility installed. There is a command-line UI.

There is an image called windowsservercore. He runs:

A container with a new view of Windows starts up a few seconds later and a command prompt (the desired program) appears. This is much faster than deploying a Windows guest OS VM on any hypervisor.  He starts a second one. On the first, he deletes files from C: and deletes HKLM from the registry, and the host machine and second container are unaffected – all changes are written to the sandbox of the first container. Closing the command prompt of the first container erases all traces of it (–rm).

The coding process is the same as usual for the devs, with the same tools as before. A new container image is created from the created program and installed into the container. A new “immutable image” is created. You can allow selected people or anyone to use this image in their containers, and the application is now very easy and quick to deploy; deploying the application image to a container automatically deploys the dependencies, e.g. runtime and the OS image. Remember – future containers can be deployed with –rm making it easy to remove and reset – great for stateless deployments such as unit testing. Every deployment of this application will be identical – great for distributed testing or operations deployment.

You can run versions of images, meaning that it’s easy to rollback a service to a previous version if there’s an issue.

There is a simple “hello world” program installed in a container. There is a docker file, and this is a text file with a set of directions for building a new container image.

The prereqs are listed with FROM; here you see the previously mentioned windowsservercore image.

WORKDIR sets the baseline path in the OS for installing the program, in this case, the root of C:.

Then commands are run to install the software, and then run (what will run by default when the resulting container starts) the software. As you can see, this is a pretty simple example. 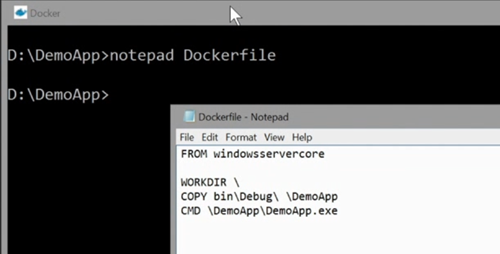 docker build -t demoapp:1 < which creates an image called demoapp with a version of 1. -t tags the image.

Running docker images shows the new image in the repository. Executing the below will deploy the required windowsservercore image and the version 1 demoapp image, and execute demoapp.exe – no need to specity the command because the docker file specified a default executable.

He goes back to the demoapp source code, compiles it and installs it into a container. He rebuilds it as version 2:

And then he runs version 2 of the app:

And it fails – that’s because he deliberately put a bug in the code – a missing dependent DLL from Visual Studio. It’s easy to blow the version 2 container away (–rm) and deploy version 1 in a few seconds.

Things that Containers are Ideal For

Note that you’ll have to store data in and access it from somewhere that is persistent.

Two will be provided by Microsoft:

Both runtimes use the same image formats. Choosing one or the other is a deployment-time decision, with one flag making the difference.

Here’s how you can run both kinds of containers on a physical machine: 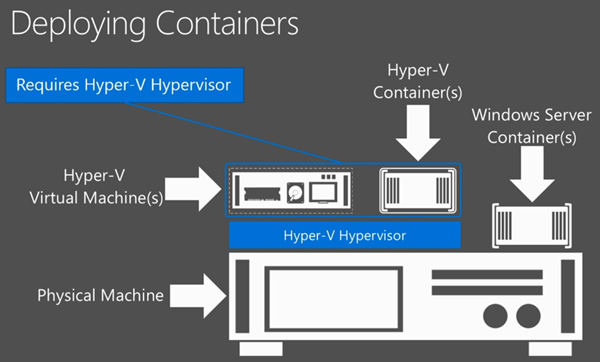 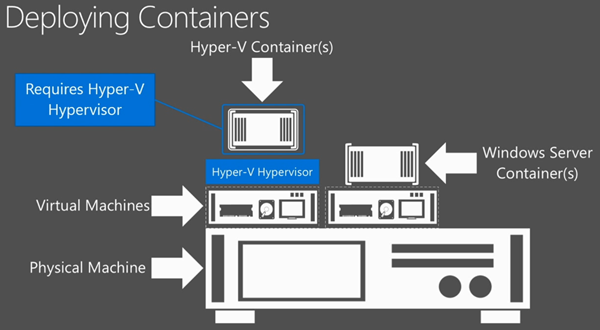 You can run containers in:

The container technologies can be:

I think I read previously that System Center would add support. Visual Studio was demonstrated at Build recently. And lots of dev languages and runtimes are supported. Coders don’t have to write with new SDKs; what’s more important is that

Azure Service Fabric will allow you to upload your code and it will handle the containers.

Virtual machines are going nowhere. They will be one deployment option. Sometimes containers are the right choice, and sometimes VMs are. Note: you don’t join containers to AD. It’s a bit of a weird thing to do, because the containers are exact clones with duplicate SIDs. So you need to use a different form of authentication for services.

When can You Play With Containers?

Containers will be in the final RTM of WS2016. You will be able to learn more on the Windows Server Containers site when content is added.

Taylor Brown, who ran all the demos, finished up the session with a series of demos.

docker history <name of image> < how was the image built – looks like the dockerfile contents in reverse order. Note that passwords that are used in this file to install software appears to be legible in the image.

He tries to run a GUI tool from a container console – no joy. Instead, you can remote desktop into the container (get the IP of the container instance) and then run the tool in the Remote Desktop session. The tool run is Process Explorer.

If you run Task Manager, go to Details and add the session column, you can see which processes are owned by the host machine and which are owned by containers. Session 0 is the machine.

Running docker commit with the container ID and a name converts the sandbox into an image … all changes to the container are stored in the new image.

Lesson: run your applications in normal VMs if:

Containers are quite interesting, especially for a nerd like me that likes to understand how new techs like this work under the covers. Containers fit perfectly into the “treat them like cattle” model and therefore, in my opinion, have a small market of very large deployments of stateless applications. I could be wrong, but I don’t see Containers fitting into more normal situations. I expect Containers to power lots of public cloud task -based stuff. I can see large customers using it in the cloud, public or private. But it’s not a tech for SMEs or legacy apps. That’s why Hyper-V is important.

But … nested virtualization, not that it was specifically mentioned, oh that would be very interesting 🙂

I wonder how containers will be licensed and revealed via SKUs?