I’m back from Chicago and, damn, am I jet lagged. I slept from 05:30 until the alarm went off at 07:00 this morning, and I’m sitting here in work, dying. But it was worth it. Ignite was a huge event, in more ways than one.

The public claims was that 23,500 delegates attended this conference. It sure felt like it at times:

Satya Nadella set the tone immediately in the keynote. This was a time of hybrid solutions and Microsoft needed IT pros to be the agents of change, be it on premises, in the public cloud, or both. It’s been years since Microsoft reached out to IT pros like this, and it was good to see. And then the announcements came flooding out. Unfortunately, the keynote clocked in at around 3 hours, and that was 1.5 hours too long. The content was good and, IMO, was right to focus on integrated solutions instead of products, but it was just too long. I’d say 60% of the audience left the main hall before the end. There was a queue to get out with around 40 minutes to go.

Windows Server 2016 and System Center 2016 were the main pieces for me, along with lots of Azure-ness. Of great interest is Azure Stack, which is very early in development, but is the on-premises/hosted version of Azure that will be able to directly manage WS2016 without System Center, although System Center will be required for HNV, etc. Lots of what I’ve known for some time was made public and I can finally talk about those things 🙂 Storage Spaces Direct (S2D) and virtual TPM are right up there for me. And finally Microsoft started to talk about the enterprise story for Windows 10.

I attended as many sessions as I could, with some meetings here and there. I mostly attended Windows Server sessions which I found very interesting. I’m always working with the latest or vNext so the content suited me perfectly. However, I can understand why some folks might have been disappointed by the low amount of vCurrent information. I understand Microsoft talking a lot about vNext (the repetition of contained content might be questioned), because there is a lot to get ready for, and as I said, this is the information I am after when I go to an event because it prepares me for my teaching and writing.

The Wi-Fi was terrible. I know; it’s always bad at these events but this was just shocking. If I was the manufacturer of the WAPs then I’d be begging the organisers not to advertise my brand. Speakers normally have a dedicated network, but from what I could tell, this didn’t help. Many of the demos I saw failed because of remote access issues.

I spoke twice at the conference. My first session was The Hidden Treasures of Windows Server 2012 R2 Hyper-V. I managed to fill the room, and I was told that there was a queue to get in (very cool!). I was very worried about my 13 demos, all of which were remotely accessed from Dublin. I had bought a USB 3.0 to Ethernet adapter in Best Buy the night before and that appeared to sort out any issues. I really enjoyed this session. I was nervous when I spoke in Barcelona at TechEd Europe 2014, but I was comfortable this time around, and I even threw in a few jokes that weren’t rehearsed – some folks even laughed! Thankfully, the scores and comments have been good (so far) in the feedback. 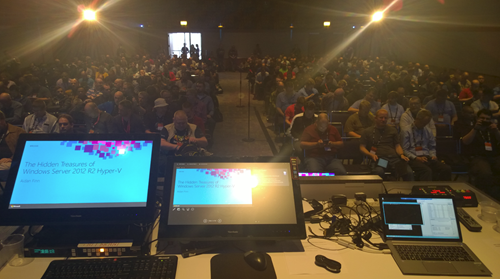 The view from where I presented

After that I went to the Petri meetup and writers dinner. That was a fun night out with the gang from Petri.com and Thurrott.com. Thanks to Stephen and Paul for the lift!

I spoke again on Thursday afternoon in one of the community theatres. I was scheduled to talk at 12:05, and I was there early to set up. Just as I was about to start talking, some dude came up and claimed he had the same slot on the same stage to talk about Skype. He complained to the staff, and he was let speak instead of me. So I removed my stuff as most of the audience left. Someone wondered why he didn’t do his session using Skype instead. After quite some ordeal, I was rescheduled and the Ignite team let everyone who had enrolled for my slot about the new time – very efficiently too, I should add. I got going later in the day and had a great time talking about using Azure Site Recovery to create DR solutions for small to mid-size businesses. Thank you to those who helped sort out the double-booking (very professionally) and to those who made the time to come listen – I think I went up against some of the big hitters in that time slot!

Part of attending an event like this is networking. I got to meet lots of old friends which was awesome. It’s always good to chat with Microsoft product group members, the folks from Channel 9, fellow MVPs, and delegates who are there to learn like me.

We enjoyed the city too. I was at Ignite with my fiancée and we wandered Chicago the weekend before the conference, making the most of the citypass vouchers we bought online. Our feet were falling off of us by Sunday night, and we saw quite a bit. We were in a really nice location on N. Michigan Avenue so we were surrounded by lots to do and see. There was the obligatory trip to The Cheescake Factory, an awesome experience at the Gibsons steakhouse, and a yum breakfast with fab service at The Original Pancake House.

Logistics-wise, this was a conference of two tales. On the positive side, the Microsoft staff (purple shirts) were both friendly and efficient. They stood in strategic locations helping delegates find their rooms. At each room the teams were quick to smile and say hi. They were in great spirits too after the party when they were running the baggage check. For me, the buses ran fine, and the private road to the conference centre bypassed the worst of the traffic – we were probably in one of the furthest hotels, about 35 minutes away.

On the negative side, (I’ve already talked about the shocking Wi-Fi) was the food and everything about it. The local staff treated delegates like prisoners. My fiancée was screamed at for trying to go to the loo, accused of breaking a line for food that she had no intention of eating. The local staff were horrible, as was the supplied conference food. I know these are protected unionised people but Microsoft needs to do something. We chose to eat at the McDonalds in the centre instead. Yes, the queues were mental but the staff were quick – there was a rumour that they ran out of food one day!!!

Would I do Ignite again in 2016 in Chicago? Yes. I was there for the content which was there for me in great amounts (I have lots of videos to watch), I enjoyed the company and the city. Are there things I would like to see improved? Sure there are, and hopefully they will be fixed. I can confirm that everyone in Microsoft that I talked to had heard the complaints, including that article. But you know what, the reason I go to a conference is to get content and that content was there for me.

Before I wrap up, there are some thanks to give:

So … when does registration for Ignite 2016 start?

2 thoughts on “Looking Back on Microsoft Ignite 2015”