So I told you that I had qualified as a wildcard to the final of Speaker Idol in TechEd North America 2014. The judges also said I need to give them a tech talk rather than my tall tale based on photography. This would be a challenge. Other finalists would tweak existing decks that they’d worked on for ages. I had to start from scratch and get it right in less than a day. The most difficult thing is … it’s a 5 minute session and they time you. It’s one of the judging criteria. An hour long session is much easier to prepare.

So I got to the hotel on Wednesday night and started working. I knew what my topic would be: WS2012 R2 Live Migration. I had a demo script and a lab in Dublin … but there is no reliable speaker net at the podium so I would have to record my demo. VPN was too unreliable.

I built up my deck. No problem there. I knew the rules: the judges expect you to stick to a format. I went to build my demo but I had some problems with PowerShell modules in my VMM-deployed labs. It took some time, but I figured them out and got the demo ready. Then Camtasia did it’s thing … I remembered to record the video at eactly the screen resolution used by the big screen at the podium. One run through of the session and it was … nearly 9 minutes long. I needed to edit the deck, the demo, and me … brutally.

At 00:30 I was exhausted. I set the alarm for 06:00 and slept like a baby. It was the first morning that the alarm woke me. No jetlag on Thursday. I had a few hours to get myself ready for the final at 12:30. I rehearsed again and again, finally figuring that if I said certain things at the right time in the demo, and left out others, I could hit 4 minutes 45 seconds. Perfect!

So off I went to TechEd. I attended a session on Azure connectivity and thin skipped a fairly dull second slot, opting to go through my deck. I remembered something Mark Minasi told me last year – when he was not a judge. Speaker Idol judges and the audiences are a mixture of IT pros and devs. Give both audiences a hook. So I did: more service uptime and “your aps stay running while IT does stuff”.

The time came. I went to the area and waited. A crowd started to gather … and then people I knew started to arrive. The Hyper-V PM team from Redmond, the Irish MVP gang (John McCabe [ex-mvp, now MSFT]), Kevin Greene, Damian Flynn), readers of my blog and twitter followers, the gang from Petri, the Ferrills (father and son tech journalists, and so many more.

I was nervous. I do not get nervous when I speak. I really don’t. I’m comfortable speaking. I enjoy it – it’s a buzz when you’ve got something to share and you can see that the audience want to hear it. But damn I was nervous. I got on stage, and completely forgot that I had a clicker on the desk. I stood with Richard Campbell (the organizer, and famed for things like RunAs Radio) as I was introduced to the crowd. 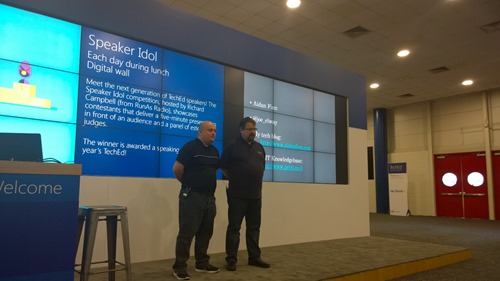 I realized how much of the audience were people rooting for me. I was amazed. These people took the time to come and support me. The view from the podium was so cool.

My plan might work. I had 5 minutes to impress … starting now!

First thing: “How is everyone? Is everyone enjoying Speaker Idol?”. And they whooped. Thankfully! That got things going well. I did my intro slides and completely let the fact that I had a clicker slip out of mind. I like to get out from behind a podium so I was walking back and forth, pressing the keyboard to progress. Yuk! I did my demo and screwed up my timing and included stuff that I shouldn’t have. I included the “It does stuff” line and people laughed. Damn, this was going OK.

I wrapped up and waited for comments. I went over 5 minutes, nearly hitting 6 minutes. Argh! I was toast. Maybe I should have trimmed the intro slide. Some comments about font and bullet points. But overall, great comments about delivery and inclusion of the audience. The dev outreach worked.

I thought the guy that did the Azure talk would win. I liked his pace (I was a bit rushed) and he seemed very polished to me. I was sure I was not winning. We were all called up for the results. The judges said this was a tough one, tougher than it used to be in past years because people know what to bring now. 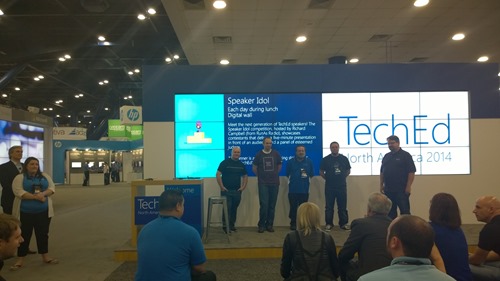 Mark Minasi (who recused himself of voting because we are friends) announced the results. It was a non-American (there was a presenter from Finland who also did a good job). And the winner of a speaking slot in TechEd North America 2015 is …

Instantly pressure slid off. And the lack of stress left me … I was shattered. I think the stress was holding me up. Afterwards I talked for about an hour with people from all over. When it all died down I was ready to drop.

A few beers were had to celebrate 🙂