I’ve heard several times in various presentations about a whitepaper by Microsoft that discusses how the Windows build team in Microsoft HQ replaced traditional SAN storage (from a certain big name storage company) with Scale-Out File Server architecture based on:

I searched for this whitepaper time and time again and never found it. Then today I was searching for a different storage paper (which I have yet to find) but I did stumble on the whitepaper with the build team details.

The paper reveals that:

They switched to WS2012 R2 with SOFS architectures:

The result of the switch was: 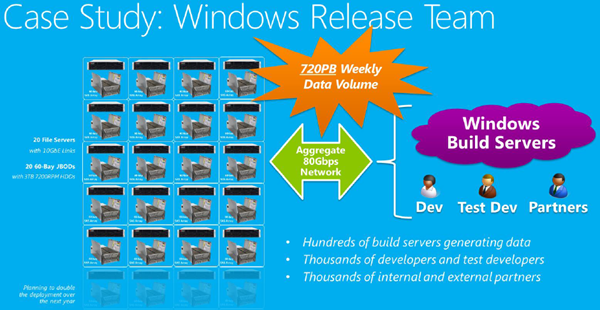 Check out the whitepaper to learn more about how Windows Server 2012 R2 storage made all this possible. And then read my content on SMB 3.0 and SOFS here (use the above search control) and on The Petri IT Knowledgebase.