… the Boards of Directors for both companies have decided to enter into a transaction whereby Microsoft will purchase substantially all of Nokia’s Devices & Services business, license Nokia’s patents, and license and use Nokia’s mapping services.

Due to all the usual legal mumbo jumbo the purchase hasn’t completed yet and won’t for some time:

The transaction is expected to close in the first quarter of 2014, subject to approval by Nokia shareholders, regulatory approvals and other customary closing conditions.

This is huge news and it isn’t.  In fact, people have been wondering “when” rather than “if”.  There were a few clues:

Like it or not, Microsoft describes itself as a “devices and services” company now.  It’s hard to be a devices company if you don’t manufacture the most commonly used form of device on the planet, the phone, like your two main rivals do (Apple and Google/Motorola).

Who makes Windows Phone handsets?  Nokia, obviously.  So do HTC and Samsung.  The rumour mill says that HTC is considering a big shakeup in their models, and the HTC One (great reviews if not sales) might be a factor.  Samsung’s ATIV SP8 handset is doing “so well” that you can pick it up for tap dancing in a store in the UK – it’s not really that bad but not far from it.  I know lots of people with Nokias, some with HTCs, and one with a Samsung.

So Microsoft would be naturally worried about a single third-party vendor ecosystem.  That must have turned into case of the shakes when Huawei started sniffing around in Finland to see if Nokia was worth buying.

There have been rumours of Microsoft building a Surface phone, and even rumours of one being manufactured in China.  Maybe the *ahem* success of the Surface tablet range forced a re-think if Surface Phone really did exist as a program?

It just makes too much sense for Microsoft to acquire Nokia.  They already had an exclusive arrangement.  Nokia was living off of cash reserves.  Nokia is a company that can build to rival Apple’s design – no more chunky models with the battery life of a Mayfly please!  And Microsoft needs to start building Windows Phone handsets before the partners disappear.

My prediction for the future:  2 handsets per 12-18 months.  One will be high-end device in the €600-700 (or $ because that’s how manufacturers do currency conversions) range.  The other will be a lower price device for the mass market.  Both will be available via AT&T in the USA, and nowhere else in the world.  Cos that’s how Microsoft executive leadership rolls!

OH NO!  This means Nokia CEO Stephen Elop could be coming back to Microsoft.  The horror!  His name was widely being discounted by informed people as a candidate to replace Steve Ballmer.  The general media and bookmakers had him as a lead player.  I threatened on Twitter that I’d switch sides to VMware, Apple, and Google if he became CEO.  Now it’s … it’s … it’s a realistic possibility.

I might have to buy this Mastering VMware vSphere 5 book by Scott Lowe soon:

On the other hand, let’s look at Stephen Elops big achievements: 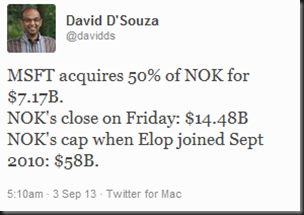 Dear Mr. Gates, for all that is good and holy, please do not select Stephen Elop as the next CEO of Microsoft!!!!!