I haven’t been to TechEd in a while.  I had never been to TechEd America before this week.  I was never present as a member of the media (but I’m an MVP first).  Wow!  What a week.

First off, I’ve got to say, that this event was run like clockwork.  Everything was smooth for me.  Registration went as you would expect.  Then I started dealing with the PR folks … who by the way, are absolutely fantastic and treated me like a VIP … and things continued amazingly.

The keynote opening was a special one.  I’m never a fan of cheesy keynote videos, but Brad Anderson as James Bond just worked.  And wait, is he doing bicep curls during meetings now?  They keynote set the stage for the week for the attendees.  Those who didn’t watch the sessions … you need to watch the sessions on Channel 9.  Seriously!  The keynote set the theme, you have no idea what amount of work the MSFT PMs, devs, and testers have done in 9 months!  I was amazed when I found out; I expected a glorified service pack.  What WSSC (Windows Server & System Center) did and how they did it … congratulations to everyone involved. 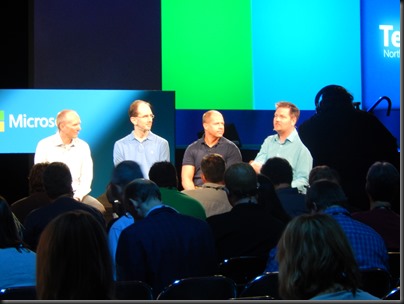 The following day and a half for me was mostly laying the groundwork sessions.  2 sessions in particular that stood out for me were by Greg Cusanza and Charlie Wen.  They covered the VMM and Hyper-V Network Virtualization topic, starting with greenfield and working towards HNV-enable hosting company and hybrid networking.  I walked out of the convention center yesterday itching to get the WSSC 2012 R2 bits and get playing.

On Monday I took part in Speaker Idol.  Like the TV show, would-be TechEd presenters have 5 minutes to do a talk and get judged.  There are several heats, the winner of each goes to a final, and the overall winner gets to speak at the following TechEd.  I prepped a session on Hyper-V Replica.  I came in second in my heat.  I got some great comments; there were compliments and critique.  Apparently I made a dry subject interesting.  I was POd at myself for going over 5 minutes; I had rehearsed under that time but added bits after listening to critique of the previous presenters.  A worthy winner went through … but technically speaking, I did do a presentation at TechEd; it was even recorded for Channel 9

The Surface special pricing is well documented.  I don’t know if the world knows, but the queue was probably never shorter than 1 hour, and looked to be 2+ hours on average, despite the best efforts of MSFT.  They even had to rope in areas not originally designed for the queue.  $99 for a WinRT tablet is a nice deal.  Hopefully I’ll get a chance to queue up for a friend back in the office who wants one.

The media experience was very cool.  I have to repeat myself, the folks who did the handling were soooo nice.  The media get a special room where there’s always a who’s who using the tales & power to get their articles posted/in.  I met with so many names and faces I know from news sites, blogs and podcasts.  The Ferrills from Infoworld were a nice father/son team to chat with.  Doug Spindler (a fellow Hyper-V MVP) is a blast.  And I really enjoyed spending time with Paul Thurrot and Mary Jo Foley.  They’re rock stars, but very approachable and nice people.

I especially have to call out the Petri IT Knowledgebase and TrainSignal folks who I am working with but had never met.  I had dinner with them last night, and spent a good bit of time with Jeff James.  Good folks all around.

As an MVP, I am lucky to deal with the PMs for Hyper-V and associated techs in MSFT.  They’re such an approachable bunch of folks.  I always learn something from them when listening or talking to them in a work context, and enjoy myself once clocked out.

New Orleans; my first view was the skyline at night coming in from the airport.  NFL fans see this view whenever the Saints are on Sunday/Monday/Thursday night football.  It really is that beautiful.  The city is old.  It is a bit worn.  But there’s a charm to it at the street level. The people here are really friendly.  Any TechEd attendee in NA or Europe knows the canteen experience for meals.  Here, every 2nd staff member is genuinely and warmly welcoming you to their section and wishing you well.  I have had more than a few taxi rides and they’ve been nice people too. I can see why the NFL comes here for Superbowl week so often.  If you like the idea of a city holiday, then I’ll recommend New Orleans.  Sure, I’ve sweated like I’ in hell, but this is a hell of a city.  And if you like urban photography, then you seriously need to visit this city.

The convention center is weird.  It’s one really long hall (I’m guessing a mile without checking on a map) with meeting rooms on the side.  It’s a long walk from one end to the other.  But … there’s always coffee, cold drinks, snacks, and I’ve enjoyed the food.

In terms of sessions, there is so much for you to watch on Channel 9.  I had hours where there were 7 sessions I wanted to attend.  There is a lot of WSSC 2012 R2 content.  I know I’m in the minority; I live on the bleeding edge with the latest stuff and vNext.  The majority of content was how to make the most of vCurrent.  If you aren’t streaming/downloading from Channel 9, then you must not care about doing a better job or developing your career.  Sure, I get some interesting access as an MVP, but I guarantee you, the stuff presented this week in TechEd was worth me attending.  I got loads from the previous year – it helped no end when prepping for the Hyper-V book.

Speaking of which, thanks to those people who had kinds words to say.  It was a pleasure meeting you.  That’s one of the cool aspects of these conferences – meeting people, new and old.  I love walking down the hall, and bumping into someone I’ve dealt with for ages, or even have someone come up to say nice things (obviously

So, I have a belly full of booze, I’m full of love for the world (except you know who, whose stocks plummeted during the TechEd keynote), and I’m about to get my jetlagged tail off to bed.

Thank you MSFT, the ladies at Waggener, my MVP/media colleagues, the presenters, and New Orleans.

Note: I wonder how many people are wondering if I’ve been body snatched by aliens after reading this article.