Spakers: Bradley Bartz, Nagender Vedula, and an army of others. 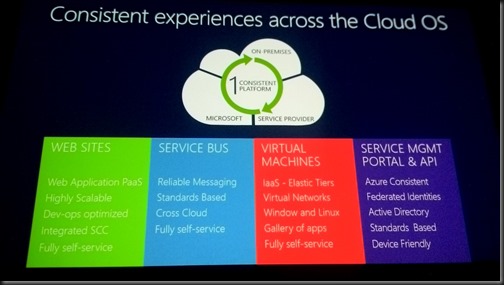 Continuity of experience and services being deployed.  Note that Windows Azure Pack portal is customizable. 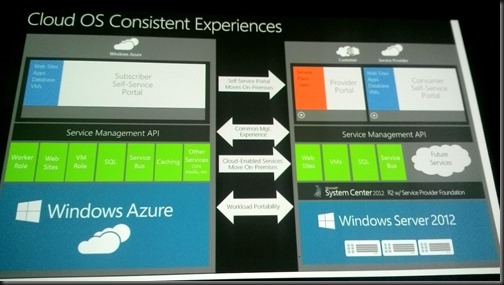 The right hand side is powered by:

Difference between Azure and on-premise.  On-premise has limits of scalability.  So we set quote a limits to control how much resources the consumer can take.

Extreme focus on cost. Maximize per-customer profitability, hardware efficiency, automate everything, differentiate on SLAs.  All makes sense for the hoster.  What about the enterprise private cloud?  Same goals apply – IT needs to be efficient and effective.  Doubly so when doing cross-charging … and to be honest, IT doesn’t want to become more expensive than outsourced services!

An elastic message queuing system.  A dev building a modern app in Azure will feel right at home on your WSSC 2012 R2 cloud.

There is a model on acquiring capacity. There is a concept of offers and plans, and that dictates what’s being deployed.  A subscriber will get billed.  Concept of teams is supported with co-administration.  Teams can be large, and membership can change frequently.  With ADFS, you can use an AD group as the co-administrators of the subscription.

Azure supports ADFS – so he logs into Azure portal using his MSFT corporate ID.  He deploys a new website, goes to a store in Azure, and installs a source code control app: Git.  Now there’s a dedicate Git repository for that website.  It’s the usual non-modified Git.  He adds a connection to the repository locally.  Then he pushes his source code up to the repository from his PC.  That’s done in around a minute.  The website launches – and there’s the site that he pushed up.

This is more than just an FTP upload.  It’s cloud so it scales.  Can scale out the number of website instances.  By default they run on a shared tier, basically the same web server/pool.  Can change that through the GUI.  Can scale the site easily with a slider, with content and load balancing.

Now logs into the Katal portal.  Can sign in with AD user account, Email account (ASP membership of email and password), and ADFS.  The same login appears as on the Azure portal as on Azure.  Same end user experience (can be skinned).  Creates a web site.  Sets up Git source code control, as on Azure.  Basically repeats the same steps as on Azure – the customer is getting the same experience.

In Katal, scalability can be limited by the admins, won’t have the same infinite resources as Azure.

Now he logs out, and Mark Umeno logs in as a co-admin.  He can see the resources that were just deployed by Bradley.  He can also see some other stuff that he owns.

I get bored here … there’s no cloud building going on.  It’s turned into a user experience demo which does not match the title of the session.