I really want Windows 8 to succeed.  But marketing fluff aside, it’s struggling.  The media are relishing in hammering Windows 8 on a daily basis.  Retailers are more interested in what Android devices they can stock than in what Windows 8 devices are on tap.  Lack of device availability (seems OK in the USA now, but still not great here) by the OEMs hasn’t helped.  The built-in apps in Windows 8 don’t help the cause.  And the apps in the store sure don’t give us much to hope for.

I don’t want to be Mr. Negative.  Let me offer examples of good apps: 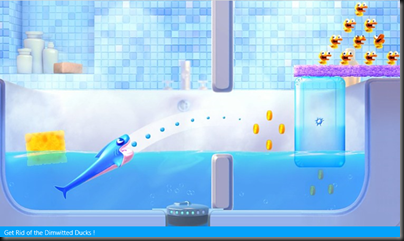 This is the one app that I have pad for in the Windows Store.  I love it.  You stretch a rubber shark to fire him around the bath tub, with a primary mission of eating the rubber duckies and a secondary mission of collecting the coins.  My colleague uninstalled it from her machine because it was too addictive.

Note that the game fills the screen.  It makes use of touch for interacting with the shark and scrolling the multi-sized bath tubs.  And it looks amazing on a 27” touch screen

Armed happens to be another great example of how to get this right.  There are some, like Nightmares From The Deep that are very pretty, and Hydro Thunder Hurricane that has console quality graphics (but at a steep price). 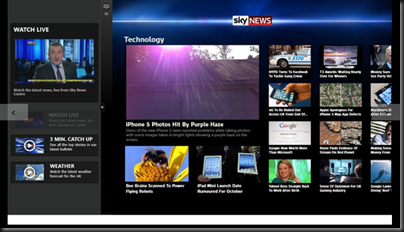 It’s not easy praising something that is owned by Rupert Murdoch, but the Sky News (UK) app is a very good news app.  Once again, you use touch in a screen filled interface.  News is presented in text/image, recorded video clips, and a live feed from the Sky News channel.

Star Chart uses the entire screen to allow you to explore the cosmos.  Netflix is a superb implementation, with smooth animation that puts the website to shame.

OK.  How do apps get it wrong?

Not Using the Screen Space

Exhibit A, your honour, is Twitter’s brand new app.  Imagine this on a normal 22” monitor.  I have a column of information that is around 25% of the total real estate. 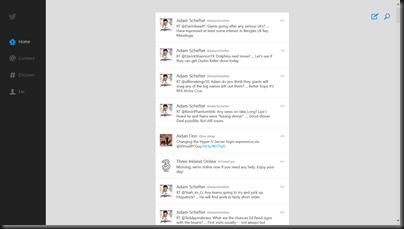 Seriously?  That’s the best that Twitter can do?  Please don’t bother informing me about the various other Twitter apps.  I’ve tried them.  They are all $hit.

What should a Twitter app look like?  Your honour, please turn your eyes towards the Tweetdeck app running in the Chrome browser.  Notice how the various columns are right there, for the user.  The user doesn’t switch between single columns that waste 75% of the screen. 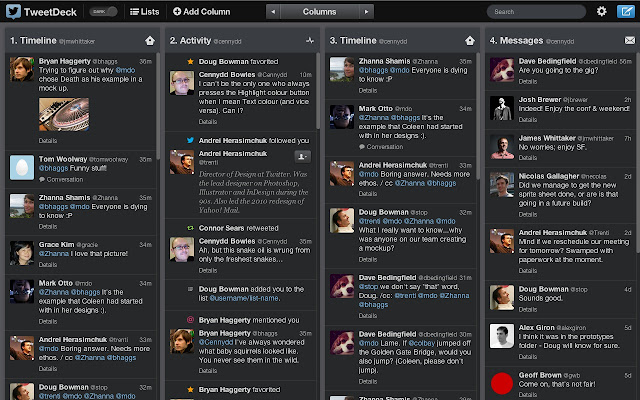 Yes, I am aware that Twitter now owns Tweetdeck.  Their Windows Store App “effort” shows just how little they care.

This is almost every information app in the Windows Store.  I’m only presenting The Register because it’s the only one of these that I have installed. 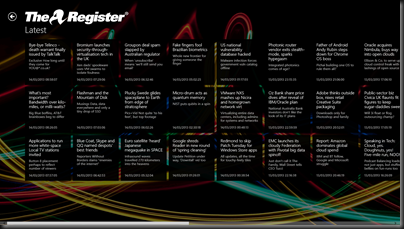 These apps are a lazy implementation.  I don’t know how they operate under the hood, but they appear as if each box is an RSS entry from the original website.

Want to see how to get this right?  Have a look at Appy Geek, an IT news aggregator.

I give you a heinous villain.  Standing in the dock now … is the built-in People app. 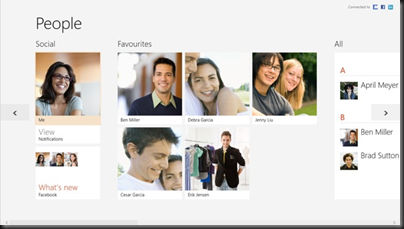 What I like about this app is the potential: aggregate all of your various social networks and contacts into a design-for-touch UI.  It should be the app I use the most on my Windows 8 tablet.  But it is not.  Instead I have Facebook open in IE (Metro) and Tweetdeck open in Chrome.  How … inefficient.

Why don’t I use People?  When I browse into What’s New, there’s a wait for it to load.  Up comes all the posts.  OK so far … apart from the lengthy wait.  Maybe I’ll open IE via a link to read something.  I come back to People a while later and there’s no new posts.  Huh!  Refresh reveals nothing.  But what if I double check?  If I open the Facebook website I’ll find newer posts.  If I browse back to the main page in People and back into What’s New then the new posts appear.  Ugh!  Why bother!?

MetroTwit (a hardened villain, your honour) falls into this bucket.

It Crashes More Than A Bandicoot

I call for the death sentence for MetroTwit, your honour.  This vile creature sins in so many ways.

MetroTwit was the app of choice on the PC.  It became my TweetDeck replacement after Twitter decided to geld their new acquisition.  The desktop app sucks on a touch UI, being sluggish, and it’s a resource hog on my Atom tablet.  I was delighted to hear that MetroTwit would have a multi-column Windows Store App.  And then I tried it.

It wastes space.  It is nothing like the desktop version.  It doesn’t refresh dependably.  And it crashes.  I can make it crash at will.  In the morning, I’ll scroll back though my Twitter feed to see what I’ve missed.  In any other Twitter app, I can go back 8-12 hours with no problems to see where I’d left off the previous day.  But if I go back more than a few pages in MetroTwit (an each page is only a handful of tweets thanks to the wasteful UI) then *bang* it’s gone with no explanation.

Where Is The Synchronisation?

At the original Build we were told that developers would be able to synchronize their apps between our (up to) 5 devices.  I’d love that.  I have a work laptop, a work PC, my personal tablet, and my personal ultrabook.  I’d like to sync via SkyDrive.

Some apps get this right.  OneNote MX is a perfect example.  Edit a note and it syncs immediately.  Some, but not many, games do this too.  But not My Country.  My Country, a Sim City style of game, broke my heart.  I had spent weeks building up my city.  Then one day it crashed and reset itself.  Had the game synced via the cloud then I might have had some way to get back my progress.  Maybe I could have continued on another device.  Alas, it did not and I immediately uninstalled the game.

Every app store is filled with crap apps (cra-apps).  Unfortunately there are so few of the established brands in the Windows Store that these cra-apps seems to dominate.  How many stick men or dancing sprites do we really need?  How many Justin Beiber info sites do we need?  How many quizzes are required? 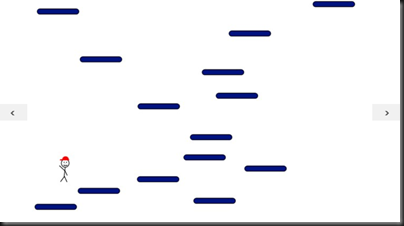 The focus has been on quantity rather than on quality.  There are competitions to encourage newbies to get apps published.  Where is the encouragement to get Tweetdeck, Facebook, NFL Gamepass, and all the other big names in there?  I couldn’t care less if there were 1,000,000 apps in the store.  I’ll only ever use a certain number, but they have to be the right apps.  I got over sprites when I graduated from the Commodore 64.

Wild Tangent, I’m looking at you.  Let me get this very clear: Microsoft should not allow desktop apps to be published/sold via the Windows Store.  Microsoft should also limit the number of apps that can be published in a day/month by any one person/company.  Wild Tangent is polluting the Windows Store with $hite.  It serves the marketing people well because it boosts the numbers of apps in the store.

Why is it that some apps are much better on every other platform?  Take Kindle for example.  I’d rather read a book on my iPhone than use Amazon’s app on Windows 8.  It’s a poor implementation compared to what is available on every other OS.  It feels like they took the poor desktop app and thought “that’ll do”.  Page turning, the one thing you do the most in Kindle, is nasty in the Windows Store App.

If a consumer goes into a store and tries a Windows 8 app then the natural reaction will be to compare and contrast it what they’ve used on iOS or Android.  Let’s take Zinio (magazine subscription/reading) for example.  There is no attempt to hide Zinio from you in the Apple Store.  Zinio is region crippled in the Windows Store; I got around that by temporarily setting my computer’s location to the USA.  Then I logged in to access my existing subscriptions.  No matter that I did, I couldn’t access more than the last 6 issues of a subscription.  I have no such problems on other platforms.  To the uneducated consumer the reason is simple: “Windows 8 sucks”.  It never crosses their mind to blame the app.

And let’s not forget the reliability of the app.  Back to Kindle: I have a situation where if I read a bit of a book on another device (such as my Kindle reader or iPhone) and sync, I cannot sync to the new position on my Windows 8 tablet.  The app just sits there forever, trying to sync, and never succeeds, fails, nor times out.  Uninstalling and reinstalling the app, followed by downloading the book again allows me to sync … until I dare to read a few pages on another device again.  Ugh!

Like I said, I really want Windows 8 to succeed.  But the desired apps and app quality is just not there.  Until there’s a shift from quantity to quality, I just don’t see Windows 8 having a chance in the consumer space, and IDC might end up being right about the future of this new tablet platform.  Consumers don’t care about the OS.  They don’t use the OS.  Users want apps, and the apps and app quality they want just aren’t there – which they can quickly see when they try devices out in the store (assuming the store bothers to power up or Internet-connect the display Windows devices in the same way that Apple demands for their devices on the next table).

3 Replies to “Why Most Windows Store Apps Suck Donkey Ba…”