I’ve mentioned before that being able to listen to podcasts and audio books on my phone is a big deal.  I don’t own a car with USB-phone integration – buying cars in Ireland is like asking the tax man to probe you with hot irons, and even the additional options have taxes on the taxes (I am not joking about that either).  I rely on an FM transmitter; the phone plays the media, the transmitter broadcasts the content over a preconfigured FM frequency over a range of a few feet, and the car radio is tuned into that frequency.

I had a simple dongle for my iPhone 4.  It plugged into the Apple socket in the bottom and I used a + and – button on the dongle to configure the frequency.  It came with a lighter adapter to charge the phone via a pin-sized socket in the dongle.  That socket was about as reliable as a campaigning politician, but the transmission worked well enough.  In some areas, the signal could be interrupted:

I typically use 89.7 as my frequency because it’s at the bottom of the range here and I only get a problem for a few miles as I drive on the M1 near the Northern Irish border.

This solution has kept me sane as my daily commute to and from work every day (between 1.5 and 2.5 hours per day) and on the road trips for work that can accumulate up to 1,000 KM in a week.

But now, I’m considering getting away from an iPhone.  I’ve gotten a HTC 8x Windows Phone 8 for work and had some problems software-wise – the handset itself is excellent IMO and wa-ay better than the previous HD7 – and I wanted to test it out.

My Apple device wasn’t going to cut it.  I saw plenty of stuff online but most of the form factors required a battery in the transmitter.  I hate that idea – I want a single solid piece of h/w, preferably with an option to charge the phone while driving.  So I ordered a Belkin Autocast Universal from Amazon. 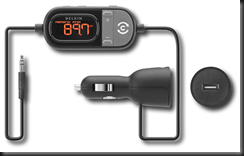 It’s universal – it works with the iPhone and Windows Phone, and probably Android too, because it uses a simple audio jack connection.  The transmitter requires power so it gets it from the cigarette lighter.  Note that this also has a USB jack – that means you can simultaneously power a GPS unit or charge the phone.  The transmitter allows you to store 2 FM frequencies and flip between them in case you do drive into a crowded airspace.  The overall cable length on mine is about 1 metre (I didn’t measure it but it’s longer than the image would suggest).

The gadget works.  I normally hate buying Belkin, but it works, and it was the only one of this design (which I like) that I could find.