Here are some ideas for Christmas presents you can give for your techie partner, kids, or yourself

We techies tend to enjoy figuring out how things work.  Much of my childhood was spent playing with Technic Lego.  Strangely, many of my hours last Christmas were also spent building this thing! 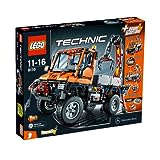 It’s a massive Unimog truck, with working steering, suspension, and differential. Even the engine block has moving parts. And the pneumatic crane is driven using pistons which are driven by a battery powered motor.  If you want you can add another motor (not supplied) into the cabin to drive the thing. So whether you live in a rain soaked country and have time to burn, or you have kids who love this kind of thing, this is a cool one.

The Microsoft Surface RT might get the hype, but this machine (that I bought) is a real work & play machine.  On it you can play all those Microsoft Store games and install those apps.  But you also can install VLC, Visio, Office including Outlook, video codecs, browser plugins, Silverlight, and manage your servers using RSAT.

The keyboard is functional on your lap when you’re at a conference trying to take notes.  And as I found a couple of days ago, the stylus (which hides nicely in its dock) is great with OneNote for handwriting your notes.  The keyboard (optional) also adds battery life to the device … up to 14 hours, or 10 hours video play time.

I’m loving my device.  When I bring it to work it’s docked and a keyboard/mouse device.  At home on the couch, it’s a touch device.  And I’m looking forward to using it to travel to the MVP summit and having enough battery to get to Seattle without hunting for a power point to top up the battery every time I move in the transfer airport.

To Broaden The Mind!

Maybe you’re the reading kind of person and you want to prep yourself for the new year of work!

Microsoft Private Cloud Computing is out and will teach you how to configure the fabrics and manage the compute cluster of a Microsoft private cloud using System Center 2012 Virtual Machine Manager (VMM).  The reviews on Amazon and on blogs have been excellent so I’ll let them convince you

Or you could pre-order Windows Server 2012 Hyper-V Installation and Configuration Guide which you can expect to arrive in February or March.  The amount of information and level of detail is huge – there’s no System Center in this book, and chapters that were planned to be 40 pages are turning out to be 80 pages more often than not.

Got one of the 32 GB Surface RTs and upset you only have 14 GB of free space?  Or maybe you have one of the Intel based devices like me, and want to synchronize SkyDrive onto the device?  Then you want to take advantage of expandable storage.  Most tablets are taking a MicroSD card (check your spec for type and maximum supported capacity).

I’ve ordered this 64 GB MicroSD that comes with an SD adapter.  That means that I can use the MicroSD card in my tablet and pop it into the adapter to use it in my ultrabook.  Maybe I can even use it in my DSLR if I’m caught without additional card capacity.  I don’t have mine yet; it’s in the post.  SanDisk is one of the reliable companies in this space (and before I get someone posting a ratty comment, even good manufacturers have the occasional glitch).

Maybe you want to have a read and get your mind off of work (sort of) for a while.  I’ll wrap up with some techno thrillers for you that I’ve read this year.

Trojan Horse is the second novel by Microsoft’s Mark Russinovich of SysInternals fame.  It features the same central characters as the first novel.  It was written several years ago and, scarily, predicts hoy cyber-espionage would evolve before security services were (in the real world) able to defend against it.  This book is much better than the first book, which had a rather dull ending.  I read it pretty quickly which is usually a good sign.

Kill Decision is the third book (that I know of) by Daniel Suarez, a former tech consultant.  Suarez is considered by many to be the ultimate tech thriller author, taking technology that is real, pushing it just a tiny bit, and creating a world that you can believe, instead of the “the-big-red-button-makes-it-magically-go” type of thing that drives me nuts.  This novel is not the third in the Daemon/Freedom series; it’s a whole new story line based on things like the predator drones that we hear of being used by the USA in the Middle East.  It’s a good novel, maybe not as addictive as the Daemon series, but still a good read.

The last suggestion is in the political/fantasy realm: A Song Of Fire And Ice, which you may know as A Game Of Thrones on TV (by HBO).  AGOT was the first novel of 5 that have been released so far.  You can get the first four in a boxset.  I read them all back-to-back, followed by A Dance Of Dragons.  The TV show is good, but it’s nothing compared to the books.  There so much more story, detail, plotting, deceit, and so forth, in the books that a TV show could ever offer.  The TV show does succeed at condensing it all and presenting a visualization, but the books are fantastic.  Let me get this straight: the only other fantast books I’ve read were The Hobbit and Lord Of The Rings … which I hated because it took Tolkein 10 pages to say something that should be said in 1 paragraph.

So there’s my tips.  Do with ‘em what you want