I have to admit, I have a big ol’ belly laugh on Wednesday as:

When the pro-vSphere arguments are the equivalent of “You suck!” then you know you can stick a fork in ‘em cos they are done.

I especially loved the comments that I should read someone else’s post on the same subject because it was “fair and balanced”.  I LMAO at that one because anyone who declares Hyper-V only fit for SME environments, despite the fact that it is more feature rich and more scalable, has well and truly drunk the beyond-the-sell-by-date Kool-Aid: 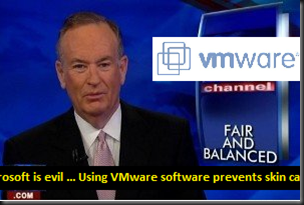 Let’s deal with some other objections that came my way:

This is the sort of crap that I’m talking about when I mention VMware FUD.  Either biased opinions or ignorance.  I can’t wait for the “You can’t run Linux on Hyper-V” argument

Oh – and no one wanted to debate the actual feature comparison where Hyper-V is clearly in the lead, offering more, doing more, and doing it with full support for the flexibility of Live Migration.

VMware makes a good hypervisor.  It’s just now, WS2012 Hyper-V is more suited to the enterprise, and Microsoft gets it – the cloud is all about service, and not servers.  This era is about beyond virtualisation and the hypervisor.  Microsoft designed the solution for that.  Their experience in providing cloud services way before that term was coined really shows through, even more so now with their exposure to Azure.  It was clear which way things were going when I had the option to choose between Hyper-V and VMware back in 2008 after deploying/running a successful VMware deployment previously.  I cared more about app performance and availability than chocolate kettle doo-dads like FT, or their vSphere power optimisation feature which was included but not supported in production at the time.

Am I biased towards Hyper-V?  Absolutely, because I believe it and System Center are the superior solution.  Nuff said.

Go ahead punk, make me laugh.