DCB is a feature that is new to Windows Server 2012 networking and we can take advantage of this in creating converged fabrics in Hyper-V, private and public clouds.  According to Microsoft:

IEEE 802.1 Data Center Bridging (DCB) is a collection of standards that defines a unified 802.3 Ethernet media interface, or fabric, for local area network (LAN) and storage area network (SAN) technologies. DCB extends the current 802.1 bridging specification to support the coexistence of LAN-based and SAN-based applications over the same networking fabric within a data center. DCB also supports technologies, such as Fibre Channel over Ethernet (FCoE) and iSCSI, by defining link-level policies that prevent packet loss.

Specifically, DCB goals are, for selected traffic, to eliminate loss due to queue overflow and to be able to allocate bandwidth on links. Essentially, DCB enables, to some extent, the treatment of different priorities as if they were different pipes. The primary motivation was the sensitivity of Fibre Channel over Ethernet to frame loss. The higher level goal is to use a single set of Ethernet physical devices or adapters for computers to talk to a Storage Area Network, Local Area network and InfiniBand fabric.

Long story short: DCB is a set of Ethernet standards that leverage special functionality in a NIC to allow us to converge mixed classes of traffic onto that NIC such as SAN and LAN, which we would normally keep isolated.  If your host’s NIC has DCB functionality then W2012 can take advantage of it to converge your fabrics. 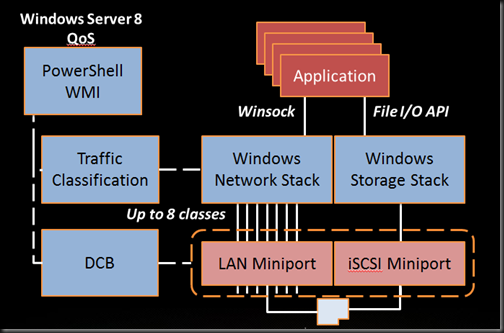