As usual, don’t bother emailing or commenting with licensing questions. They will be deleted and ignored, no exceptions, and this includes you with your special situation.  Please ask you reseller – that’s why they exist.

As you may be aware, Windows RT (the OS installed on the Surface RT and a few other Windows tablets) comes with a copy of what is effectively (features, license-wise, and rights-wise) Office Home & Student 2013.

Office 2013 has a peculiar limitation because of its relatively low price: you cannot use it in the workplace.  To use Office Home & Student at work, it needs to be “upgraded” to a business version via a license purchase.  This isn’t actually a feature limitation – the versions of Word, Outlook (Windows 8.1 RT has Outlook), etc, all will connect to Exchange, Sharepoint, etc just fine without any upgrades.  What you need is an additional license … something you record that you’ve purchased for that device in a spread sheet (like we need more of those!).

Is there a way to mark a Windows RT device as licensed?  Nope.  I was about to write “Use a custom GPO to add a registry value” but I remembered that Windows RT cannot join a domain.  Is there a way to detect unlicensed machines?  Nope.  Can you stop end users connecting to services with their Windows RT … only if you put in networking measures (NAP, NAQ, etc) to actually prevent BYOD.

Ooooooookay then.  I guess Microsoft are pretty clear on this?  Ehhhhhh actually it’s quite the opposite.  When talking heads go on podcasts they’re saying things like “Surface RT is great in the office because you don’t need to buy additional expensive software like Office”.  That line isn’t uncommon from MSFT out in the world.

This reinforces or reminds a few things:

As usual, don’t bother emailing or commenting with licensing questions. They will be deleted and ignored, no exceptions, and this includes you with your special situation.  Please ask you reseller – that’s why they exist.

PLEASE NOTE: Not all machines are supported by Windows 8.1 Preview at this time.  Via Paul Thurrott.

I started an update of the office demo Surface Pro to Windows 8.1 Preview using the online update process.  I started by browsing to http://preview.microsoft.com, and clicking Get It Now.

Note: you can also download the ISOs (x86 and x64) from the site (tomorrow) and from MSDN and TechNet. 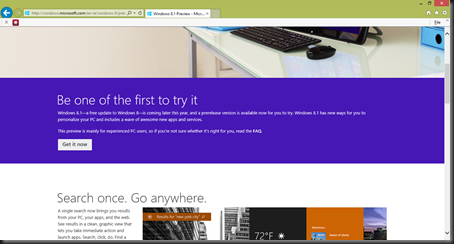 This downloads and runs an update installer.  This is a small update to Windows.  In the case of the Surface Pro, it spent ages at “Configuring Windows features 100% …” after the reboot.

I then logged into Windows 8 again.  A banner appeared, offering me the Windows 8.1 Preview.  I clicked on Go To The Store in the banner.

Windows 8.1 Pro Preview was there for me to install.  Nice.  I clicked Download to get the 2.44GB installer.  I forgot to change the power plan of the Surface Pro and it went to sleep.  I went back in, changed the plan, and the download picked right up after a few moments.

After about 1 hour 20 minutes, the progress was at around 40% on my 8 Mbps ADSL (considered fast in Ireland

10 minutes later it jumped to around 66%.  This acceleration might have been due to the Build keynote stream that was aborted by Microsoft that I had been watching.

And then after 1 hour and 40 minutes I was prompted to reboot the Surface Pro.  Oooh exciting!  It then rebooted into a Setting Up <XX>% screen.  Less than 3 minutes later that was done and a another reboot.

Now the Surface was Getting Devices Ready.  That was quick, just 30 or so seconds.  Then Getting Ready appeared, and then Applying PC Settings.  That flew up to 100%.  And another reboot.

I wonder what happens if you don’t accept the license terms!  Now it wants my password and dual factor phone number.  A security code is instantly texted to me and I verify the machine.

Next up: Skydrive.  I choose to use Skydrive.  There’s nothing more than that apparently.

Now it’s the “Hi, we’re setting up things for you”.  Damn you!  You’ve already set up lots of things for me

It’s been 10 minutes since the machine “finished” installing.  A minute later and the Start Screen appears with my previously installed apps.  And we’re done!

Windows 8.1 Preview is out now on http://preview.windows.com.  You can do an online update or you can download the ISOs.  I just saw that MSDN has the ISO downloads and one for .NET 4.5.1 Preview.

Steve Ballmer shows some Windows Phone handsets.  They are going to show small tablets.  MSBuild attendees are getting the Acer 8” tablet.  More are on the way.  Ballmer “wouldn’t call them PCs”.

He talks up the hybrid device.  That’s what I use … great for work and play.

He then talks about apps.  To be honest, apps are improving.  The quality of games is up too.  Facebook are bringing out a Windows 8x app.  The NFL is bringing out a fantasy app for Windows 8.  That’s a huge international market.  Tesco (UK version of Wallmart) have an app too.

Microsoft “pushed boldy in Windows 8” and desktop application users told Microsoft to “refine the blend” (in his coffee terms).

He reminds us that the Start Button (not menu) is back.  You can choose to boot to desktop.  You can quickly get to your apps.  There are more multitasking options with how apps share screen space.

Bing is built into Windows rather than being an app.  It’s there for devs to build on, just like Google is in Android (for the DoJ and EU Commission

Here comes the worst presenter in the Microsoft executive level, in my opinion.  She starts the demo on an Acer.  First up … Nook … Ouch, Barnes and Noble.  Twitter looks decent in portrait mode … Oh, it was designed for this form factor apparently.  Oh nice feature, swiping on the space bar seems to autocomplete or something.  Now we can slide up on the top qwerty row to enter numbers.  Very nice – others will copy this.

The Mail app now includes social features, e.g. Facebook updates.  It appears (it is a demo) that you can easily delete a common selection of junk mail with a swipe.

Search can bring results from everywhere using Bing.  No need to explicitly select a Bing app.  In the demo, finds a restaurant, maps it, selects it, and can book a table.  A search of a band finds loads of info, and can quickly start playing music via a completely redesigned XBox music.  Redesigned for playing instead of the previous searching emphasis.  Goes to a regular music webpage.  Lists all the bands of a festival.  Shares via charms to the Music app.  The Music apps creates a playlist from the band list on the site.  Very impressive example of app contracts.

I looked away, I think I saw JLG swipe a screen without touching.  The Start Screen tiles smoothly appear on your desktop wallpaper, reinforcing the Start Menu “plus” functionality.

We get a demo of 50/50 snapping of apps.  The split can be any size you want by sliding the splitter.  You can right-click on a link to open a new window … now it’s 3 apps on screen!  Apps on more than one screen at once.  Was surprised this wasn’t on Windows 8 tbh.

“Windows 8.1 is Windows 8 refined” appears to be the mantra.

Boring developer stuff.  Am going into hibernation for a while.

The Windows Store is updated to make it easier for people to find and download/buy apps.  Apps are now updated automatically.  Thank God!  The spotlight rotates.  Lots more apps are on the main screen via better use of space.  Your app history/ratings are used to prepare “Apps for you”.  The screenshots are bigger.  Related apps are shown in the description info.  You can change categories, etc by swiping from the top.

Each monitor can have it’s own scaling factor to make the most of the space.  This is done by Windows and has no app requirement.

Tiled resources is a programmable page table for graphics acceleration.  In other words, be able to render huge objects that don’t fit into the memory of your GPU.  Games can run with unprecedented level of detail.  They show a video of an object with 9 GB of data on a retail DX11 GPU.  They zoom in, and you can see the rivet detail of a glider in flight.  This feature is also in Xbox One apparently.

A 3D printer is appearing in MSFT stores soon.  Another one coming to Staples for under $1300.  Out comes a Lego Mindstorms robot.  He uses a Windows tablet to communicate with a tablet in the robot.  The on-robot tablet controls the robot by USB interface.

The crazy 3200 * 1800 Samsung something something something ultrabook with Haswell processor is shown.  It gets 12 hours from a single charge allegedly.  The Lenovo Helix convertible is next.  Acer Aspire P3 (1.74 lbs) with Core i5 CPU with a detachable protective cover keyboard.  A sub $400 touch Acer laptop with dual core AMD CPU.

JLG Comes Out With Surface Pro

And the webcast fails because it “has not yet started”.

And that is that.

Want to manage your WS2012 R2 Preview servers from the comfort of your PC?  The end solution is, of course, System Center 2012 R2

But to get you there you need RSAT.  A preview release is available now.

As always the new version of RSAT will only support the newest desktop OS … and that is Windows 8.1 Preview (allegedly out on Wednesday 26th June).  64-bit and 32-bit versions of RSAT are available.

You also need to remember that you can only run one version of RSAT on a PC:

Only one copy at a time of Remote Server Administration Tools can be installed on a computer.

The new version of Hyper-V Manager does work with Hyper-V on WS2012 – it’s still WMI v2.

This post is being written before the preview release is out, and before guidance has been written. It is based on what we know from TechEd NA 2013.

Upgrading a non-clustered Hyper-V host has never been easier.  Microsoft did some work to increase compatibility of VM states between WS2012 and WS2012 R2.  That means you don’t need to delete snapshots.  You don’t need to power up VMs that were in saved states and shut them down.  Those files are compatible with WS2012 R2 Hyper-V.

Do An In-Place Upgrade

You log into your WS2012 R2 host, shutdown your VMs or put them in a saved state, pop in the WS2012 R2 media, and do the upgrade.  The benefit is that you retain all your settings, and the VMs are right there in Hyper-V Manager with no effort.  The downside is that any crap you might have had on the Management OS is retained.  Microsoft always recommends a fresh install over an in-place upgrade.

I prefer this one.  But be careful – do not use this approach if any of your VM files/settings are on the C: drive of the host – I hate those default locations in Hyper-V host settings.

You shutdown the host, pop in the media, and do a fresh install over the C: drive of the host.  This gives you a completely fresh install.  Yes, you have to rebuild your settings but that can all be scripted if you’re doing this a lot.  The final step is to import the VMs using the register option.  This simply loads up the VMs, and then you start up whatever VMs you require.

This is a little off-topic but it’s related.  You can upgrade a PC from Windows 8 with Client Hyper-V to Windows 8.1.  The upgrade will automatically put running VMs into a saved state.  After the upgrade, the previously running VMs will be running.

The final step in any Hyper-V upgrade is to upgrade the Hyper-V Integration Components in the guest OS of each virtual machine.