After the driver is updated, the names of the network adapters are changed to the following in Device Manager:

After you add new network adapters that are of the same make and model, Device Manager shows the following:

A hotfix is available to resolve this issue.

I like to have a look at what people are reading on my blog from time to time.  It gives me an idea of what is working, and sometimes, what is not – for example, I still get lots of hits on out-dated articles.  Here are the 5 most viewed articles of the last year, from 5 to 1.

An oldie kicks off the charts … this trend continues throughout the top 5.  At least this one is a good subject that is based on WS2012 and is still somewhat relevant to WS2012 R2.  Replica is one, if not the, most popular features in WS2012 (and later) Hyper-V.

4) Rough Guide To Setting Up A Hyper-V Cluster

I wrote this article in 2010 for Windows Server 2008 R2 and it’s still one of my top draws.  I really doubt you folks still are deploying W2008 R2 Hyper-V; I really hope you folks are not still deploying W2008R2 Hyper-V!!!!  Join us in this decade with a much better product version.

Please note that the networking has change significantly (see converged networks/fabrics).  The quorum stuff has changed a bit too (much simpler).

We saw VMware’s market share slide in 2013 (IDC) while Hyper-V continued the march forward.  More and more people want to see how these products compare.

And at number one we have … drumroll please …

Wow! I still cannot believe that people don’t understand how easy the licensing of Windows Server on VMware, Xen, Hyper-V, etc, actually is.  Everyone wants to overthink this subject.  It’s really simple: It’s 2 or unlimited created Window Server VMs per assigned license to a host people!!!  This page accounted for 2.8% of all views in the last 12 months.

Sadly, not a single post from the last year makes it into the top 10.  I guess that folks aren’t reading about WS2012 R2.  Does this indicate that there is upgrade fatigue?

Microsoft has released version 3.5 of the Hyper-V integration components for Linux.  This download is intended for versions of Linux that do not have the Linux Integration Services (LIS) for Hyper-V already installed in the kernel.

Version 3.5 of the LIS supports:

The below matrix describes which Hyper-V features are supported in which version of the LIS and distro/version of Linux: 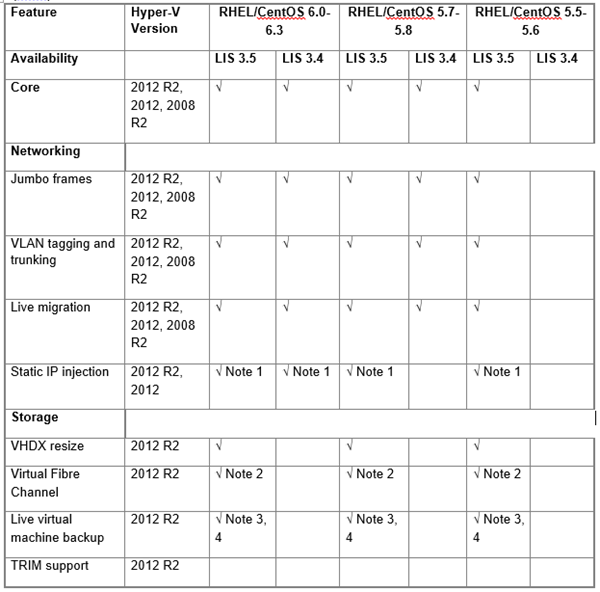 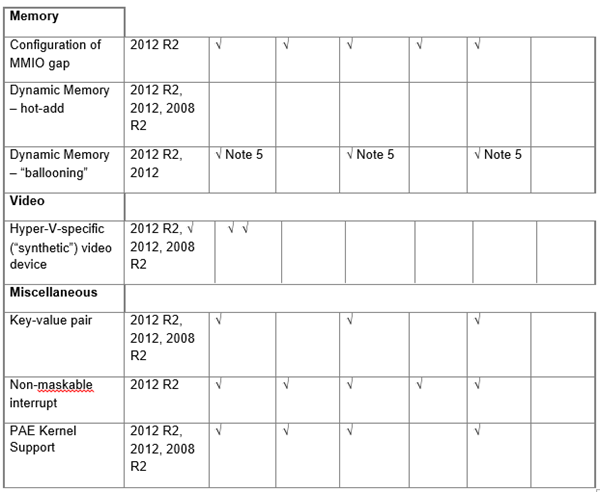 The following features are not available in this version of LIS:

Additionally, you may notice that writing a full memory dump file does not finish and that the virtual machine is restarted on another node in the cluster.

There are two options for resolving this issue.

Option 1: Change the settings from the GUI

5nine Software announced the release of the free 5nine V2V Easy Converter v2.0 yesterday.  This will allow you to convert VMware VMs into Hyper-V VMs with support for VHD and VHDX and the following guest OSs:

The last three versions of Hyper-V are supported:

This was just shown by Kevin Turner (COO Microsoft) at WPC 2013: 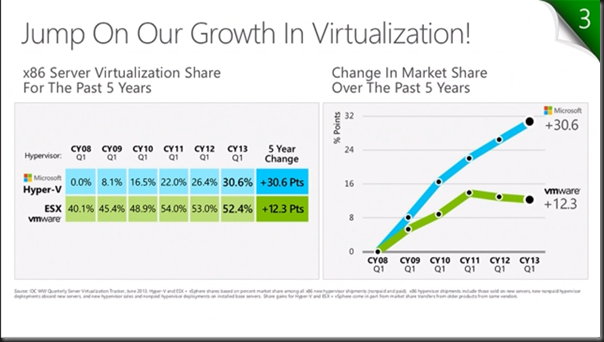 Microsoft posted a KB article for when you have a situation on W2008, W2008 R2 or WS2012 where a cluster fileshare resource fails on a failover cluster node and the cluster log contains "status 5. Tolerating…".

One or more nodes of the failover cluster may contain mismatched entries in the DNS suffix search list.

This is a configuration issue and there is no hotfix.

A hotfix has been released for Windows Server 2008 R2 Hyper-V for when computers that use AMD central processing units hang or restart during the Live Migration process.

This issue is caused by caused by AMD erratum 383. For detailed information, see the “Symptoms,” “Cause,” and “Resolution” sections of this article.

The article explains that:

When you run Windows Server 2008 R2 Hyper-V on a computer that uses AMD Family 10h central processing units (CPUs), the host computer may restart or stop responding unexpectedly. When this issue occurs, you receive no error messages.

This issue may occur when the Live Migration feature is used to move a virtual machine (VM) from one Windows Server 2008 R2 Hyper-V-based node to another node. This problem usually affects the source node that is the original location of the VM and usually does not affect the target node that is the new location where the VM will be moved.

Note This issue may occur in other scenarios and does not occur only in Live Migration scenarios.

A hotfix has been released to fix this issue.

Congratulations to the really nice folks at Altaro (that’s been my experience and that of some of my customers) on the release of Altaro Hyper-V Backup v4.  Here are some of the features: 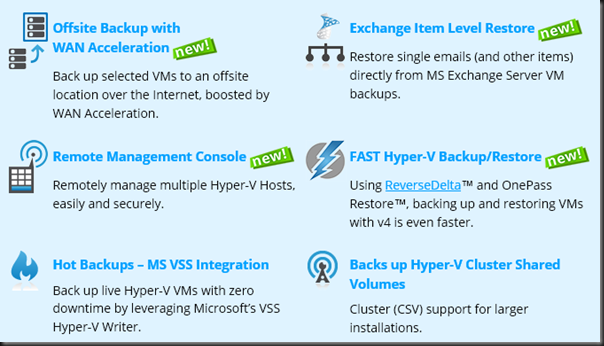 Altaro, like a few others, are really quick to keep up with Microsoft.  I wouldn’t be surprised if they quickly celebrated the release while installing WS2012 R2 Hyper-V to get working on it … while certain big names in backup still don’t support WS2012. 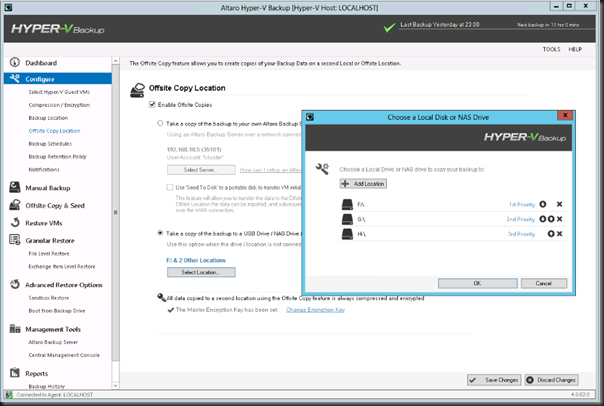 Hyper-V Backup is available as a nice free solution for the very small business and a fairly priced solution for larger businesses.

Microsoft has released a knowledge base article to deal with a situation where you are unable to use kdump or kexec for Linux virtual machines on Hyper-V.

In this scenario, if the Linux virtual machine crashes, the core dump of the Linux kernel is not generated.

This issue occurs because Hyper-V is unable to host two simultaneous connections from the same synthetic driver running inside a virtual machine.

There are more instructions on the KB article to deal with resolving this issue with each of the supported distros.