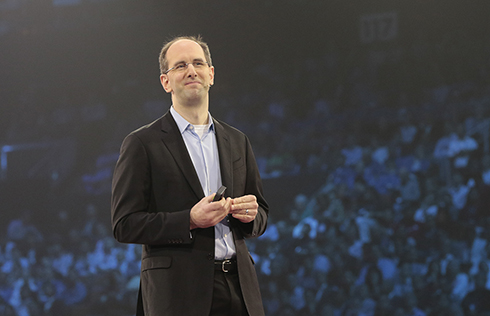 I join this session late, and Guthrie is talking about the growth of Azure’s data platform before segwaying to EMS, renamed to Enterprise Mobility + Security.

Azure Information Protection adds classification to the protection of Azure RMS (being upgraded to AIP). Julia creates a document. AIP automatically classifies the document. She wants to reduce the classification and she’s prompted to justify this (audited). The document is secured for safe sharing, no matter who gets it or where it goes.

Cloud App Security is next. 512 cloud apps are discovered in a demo organization. Each app gets a score from 0-10, measuring the security profile of that SaaS application – 13,000 apps are profiled in CAP. She browses one and sees that files are shared publicly. She opens up policies and opens a PCI compliance one. It shows two hits in that app – and she can see where credit card info is being shared in a doc in OneDrive. She can secure it straight from the CAP portal by making the file private, without going into OneDrive.

Back to Scott Guthrie.

OMS is a server management solution, now available via the CSP program – it was restricted to EA customers only.

Employees work on double the number of teams that they did 5 years ago. Working remotely has quadrupled. Millenials will make up 50% of all US workers – they’re biased to multi-tasking, working in teams, and working remotely .. and they work differently. 90% of the world’s data was generated in the last 2 years … making information overload worse. 87% of senior managers admit to uploading docs to personal file sharing/sync systems to get stuff done, shadow IT bypassing the restrictions of old IT. 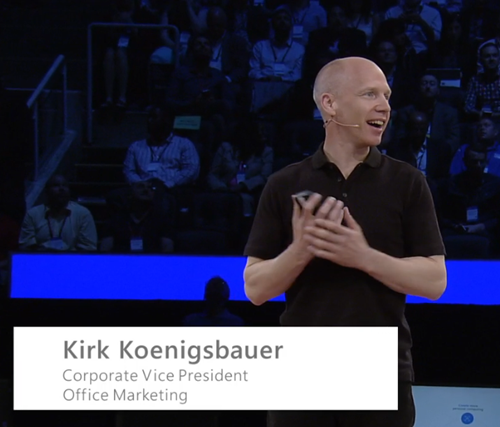 The focus here is re-inventing productivity for the way we work – digital transformation. 4 pillars. 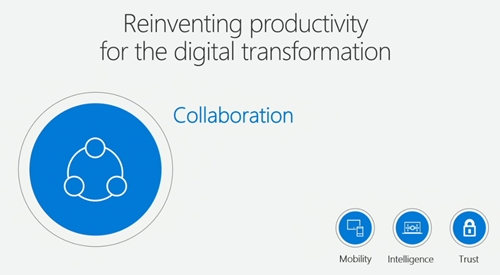 Office 365 is used by more than 70+ million work users, with growth being 57% year over year. The email workload has been a driver. Gartner says Microsoft has 80% share in enterprises for cloud email. With the E5 SKU, partners make 1.8x revenue … and a sustained managed service business that you’ll never get from stopping after email migration where most partners opt to stop.

Facebook uses Office 365. It makes sense, especially when you look at features like Yammer, Planner, Groups, Graph, Delve, which are all about collaborative flexi-teams, supported by information, self-service management with Azure AD Premium. “Move fast” is the most important factor in Facebook culture and Office 365 supports this.

Now on to Windows and devices – the breakthrough to more personal computing. There’s a demo video of Microsoft devices in action. 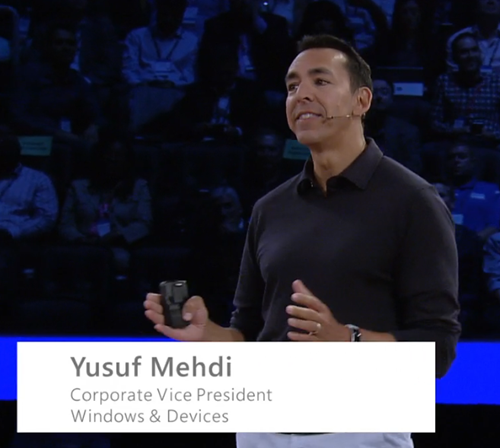 There are more than 350,000,000 monthly active Windows 10 devices. 96% of enterprises are testing Windows 10 and will need deployment skills in the next year.

Security threats are real. They take over 200 days to discover and 70 days the recover from. Hackers are targeting endpoints: weaknesses in IT processes and users. The FBI says there are two kinds of companies: those that have been hacked and those that don’t know it yet.

Windows 10 could have prevented the Home Depot, Target (both pass the hash attacks) and Sony attacks, apparently. Passwords are a problem. 1 in 9 have gone to a website and not used it because they cannot remember the password. In 2.5 weeks in the anniversary update, you will be able to log into websites and apps using Windows Hello (face or finger scan). Credential Guard protects against pass the hash attacks. We see demos of Windows 7 versus Windows 10 – Windows 7 is compromised but Windows 10 is safe. Device Guard hardens a system so that malware cannot run. In a demo, the firewall is up and Defender is running. He opens a “Contoso Expense app” and the security features are turned off, but on Windows 10, Device Guard blocks the malware from running. In the anniversary update, a new feature adds more security. Advanced Threat Protection dashboard can be used to monitor machines by security professionals. You can even go back in time to investigate penetrations.

Pen, Cortana, HoloLens, and Xbox gaming all get updates in the anniversary update. Out comes demo god, Bryan Roper, straight from the set of Dexter. 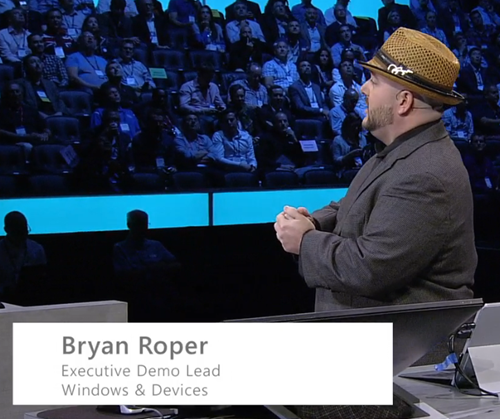 First, Windows Ink, a platform. Visual Studio demo – 4 lines of code to link enable an app. Now a BridgeStone demo, and he has a tyre, and drills a screw into it. Then he gets a hole in the side wall. 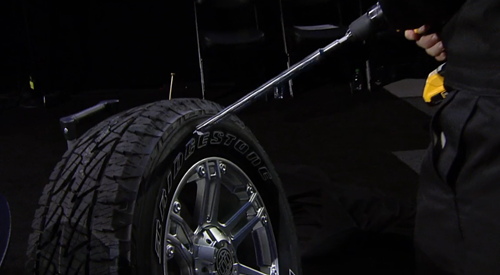 And then a larger hole. 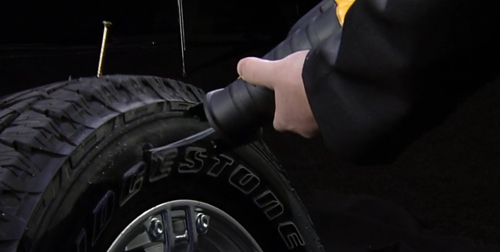 He gets his surface and starts taking ink notes on the tyre inspection. He takes evidence by using the Surface camera, and starts highlighting things in the photo using the pen. 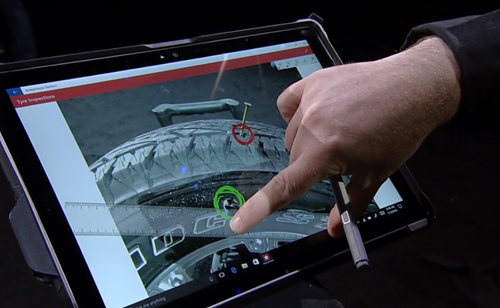 And he’s done. Back to Yusuf.

Windows 10 Enterprise E3 is coming to the cloud (starting in the fall). SMEs can get the latest Windows 10 security features for $7/month per user (not per device) via Cloud Service Provider (CSP) resellers.

Surface-as-a-Service will be sold by CSP Tier 2 distributors that are also authorized device distributors. This is a leasing service … so they can get cloud (Office 365, EMS, Azure, etc), Surface, Windows 10, all on a per-user per month basis.

On to HoloLens for mixed reality. The PGA is working with HoloLens. The following demo was created in 8 weeks by 3 developers using an universal app. There’s a huge hologram of a golf course that they browse around using voice and gestures. They put up a heat map of PGA player shots on a hole. They switch to showing the route to an eagle by a single player. 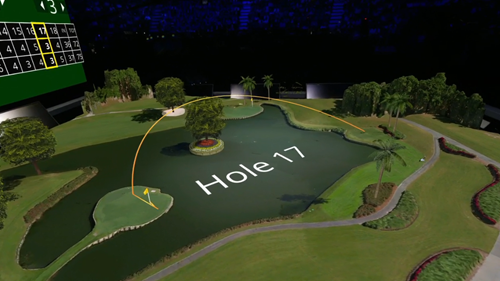 Back to Yusuf, who wraps up this keynote.