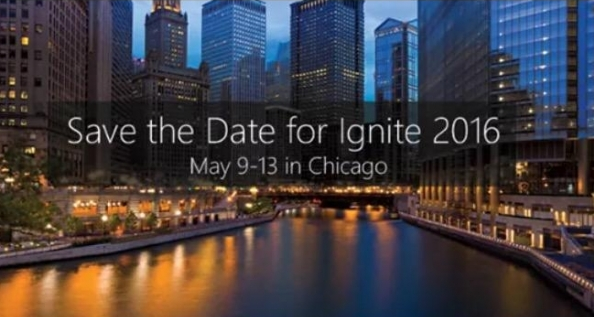 [EDIT] Microsoft later announced that Ignite 2016 was rescheduled from May to September and moved from Chicago to Atlanta.

The Chicago Tribune (hidden behind a pay-wall, but accessible via some apps on mobile platforms) is reporting that Microsoft has cancelled Microsoft Ignite for Chicago in 2016. I’ve not seen the news on any other reputable news sites, but the Tribune is one of the big newspapers in the USA. I’m guessing that they heard the news via a leak in one of the city offices in Chicago – a city with a *cough* certain reputation – the number of politicians, civil servants and union leaders that had to be on stage and have their say when Microsoft announced Chicago as the venue for 2015 was laughable.

The venue, McCormick Place, got awful reviews from people. The local staff at the venue screamed at delegates like they were prison guards. Note that the “MSFT” staff (in purple shirts) were actually very friendly and helpful. The venue was miles from most of the hotels. The bus service was irregular. Taxis ripped people off, charging $65 for $12 trips. The food was horrendous – the McDonalds in the venue ran out of food one day! And the party was a collection of 45 minute long queues to get a food sample that was single-bite sized.

Don’t get me wrong – I enjoyed the content. But the venue, McCormick Place, was rubbish. Opinions on Chicago seemed to depend on where you were from. Any Americans I spoke to didn’t like the city – some called it “a bit stabby”, but keep in mind that those issues were in other areas. Most foreigners liked the city. It’s easy to get to with lots of direct international (and national) connections via the dreadful international terminal at O’Haire airport. We arrived in on the Friday and enjoyed the sights of the city, despite some unfriendly locals, and our hotel room was simply a place to sleep.

Why did Microsoft cancel? The Tribune said that Microsoft declined to comment. Maybe the Tribune got the scoop before Microsoft is ready to talk.

Whatever happens, Microsoft needs in-person technical events. These big events educate and excite, and despite all the negativity about McCormick Place, Ignite 2015 had a lot of material to keep me interested. There is simply no way that I could have spent that much time watching webcasts – I still have stuff I haven’t watched from the last 6 months because of lack of time.

I guess we’ll have to wait on Microsoft to make some kind of formal announcement/leak to find out what’s really going on.

7 thoughts on “Report That Microsoft Ignite 2016 Is Cancelled”