Last week I wrote a story for Petri.com about the rumours of Dell buying EMC. Today, the New York Times, Bloomberg, and Fortune all have stories saying that an announcement could be released as soon as today. The purchase could cost as much as $65 billion.

Let me paint you a picture. Let’s say I have a mortgage on a house, and the balance of that mortgage is €110,000. And to get that loan, I had to get funding from several banks. I’m doing OK, but my savings are small every month. Then I decide I want to buy a second home, and I need a loan of €650,000. After some analysis, it’s decided that the value of the second house is dropping and will never recover. What do you think the bank will say to my application?

You don’t have to be a financial wizard to figure out that the bank will run me out of their office.

And that’s the position Dell is in right now, with around $11 billion in debt, and possibly now looking for an additional $65 billion.

[EDIT] We later found out that the figure will be $67 billion. What’s $2 billion between friends – let’s ask Microsoft …

This storage giant was once a huge force, but their best days (the 1990’s and 2000’s) are behind them. That’s why EMC has been shopping themselves to anyone that will take a call – I declined last Monday. EMC faces huge challenges:

I don’t get why Dell wants to buy the Nokia of storage. They’d be picking up a huge company, with a shrinking presence. Sure, EMC has lots of corporate customers, but isn’t this acquisition an expensive as this.

Dell already has $11-$12 billion of debts from their privatisation. And now someone, some financial genius, is going to give Michael Dell another $65 billion to buy a failing storage company?

Dell is one of the companies killing EMC. Dell already has EquaLogic and Compellent SAN storage. Dell partners with Nutanix, one of those new arrivals. And Dell has solutions for software-defined storage.

EMC owns 80% of VMware, a very healthy company. Until a week ago, there were theories that VMware would acquire their parent, EMC! If Dell acquires EMC then they get 80% of VMware. Could that be the goal? if it is, then it might back fire.

Here is the server market share for Q2, 2015 according to IDC: 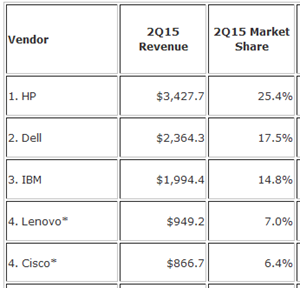 Do you think that HP, IBM, Lenovo, or Cisco would be happy to partner with Dell on virtualization and private cloud? I sure don’t! I think we’d see more momentum for source cloud in Fortune 1000s and the Microsoft stack. Acquiring VMware would be not as rewarding as Dell might think – VMware was probably already concerned about the threat of public (Google, Microsoft, AWS) cloud and open source private cloud, and marginalization through acquisition  by the #2 server vendor would not help.

Maybe Dell has promised his backers that he’ll sell EMC’s shares in VMware. That might help finance the $65 billion loan. But that leaves Dell just with the EMC portfolio, one that was once great, but has little place in a new world.

Watch this story develop. In two years, we could be reading about one of the biggest corporate write-downs in tech history.