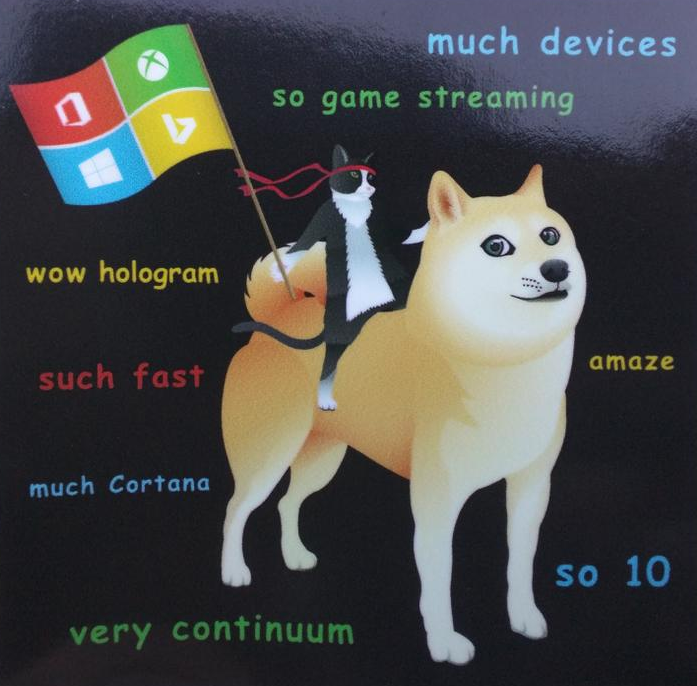 Already, thanks to a snafu by Microsoft, we know the specs of the new Lumia flagship handsets:

We also know that there will be a dock for these handsets to leverage Windows 10 Mobile’s Continuum feature, basically turning your phone into a desktop device with a monitor and Bluetooth keyboard and mouse.

The Surface Pro 4 is expected to be an evolution of the Surface Pro 3 (which is defeating tablet trends by increasing sales quite a bit year on year), and now Microsoft has copped on and started sales through the partner channel.

We do know that Windows 10 head honcho, Terry Myerson, is feeling confident: 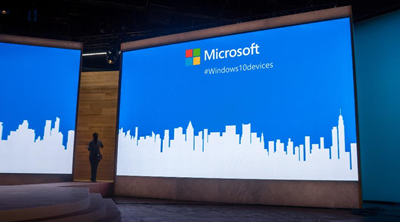 Petri Executive Editor, Brad Sams, isn’t impressed by the wi-fi at the venue in downtown New York – so it’s no different to any recent Microsoft conference:

Paul Thurrott isn’t impressed either. Seriously, if you’re going to invite the tech press to a live event then don’t you want them to communicate about what your are showing?

Here we go … it’s all about “moments” … “we live in one of those moments”. “Let’s inspire. Create new experiences and new possibilities. Let’s empower everyone to go further. To do great things. Changing how we touch. ”. And the stream died. Sorry.

Microsoft should look into building a cloud scale data center facility with content delivery networks and media streaming … oh … Seriously, why the frak do they use 3rd party streaming services? 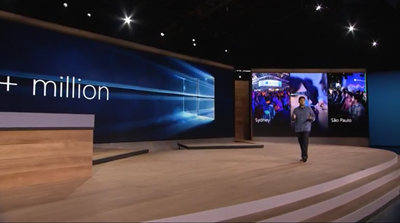 New devices are the next chapter of Windows 10. Features like Cortana and Continuum are software + hardware, Windows 10 + new hardware. Today is the “start” of that next generation hardware (MSFT is doing cooperative launches with OEMs in the coming weeks).

All Xbox One machines will get Windows 10. Some special editions and the pricey gaming controller coming for Christmas.

Next up HoloLens. They want to show us something different that they’ve developed internally … mixed reality gaming on HoloLens:

Turn every room into your house into a video game level. They show us Project X-Ray, he’s going to defend the stage from an alien invasion. 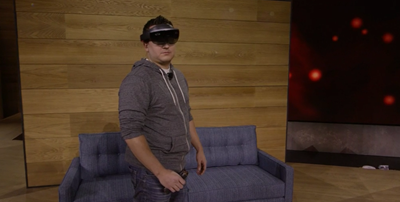 He has a wearable hologram – a hologram you can hold. FRAK! 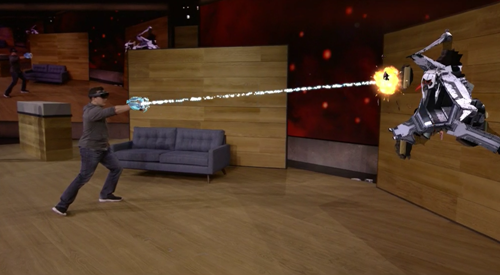 Spatial sound so you can use sound/direction. The robots know the room and use it. Me want! 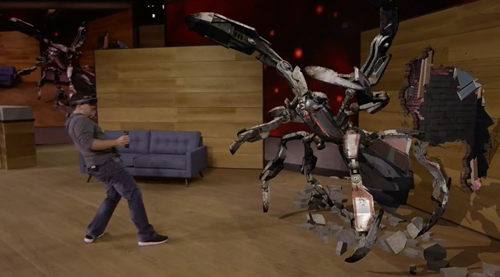 Starting today they are taking registrations for the developer kit, costing $3000 and shipping in Q1 2016.

That’s the audience warmed up.

Eh. The new prison band from the future from a movie of the past. Sorry, I’m checking my Twitter feed and checking my mail. At $249 it’s the same price as the top end FitBit – you can pre-order today. Hard to win against a brand like that if you’re the same price, even if you have more features.

Surface is worth 3.5 billion dollars per year. Now on to Panos Panay, the new leader of the entire devices family.

He feels blessed – HoloLens has him and the crowd excited – how new for a devices event at Microsoft!!! 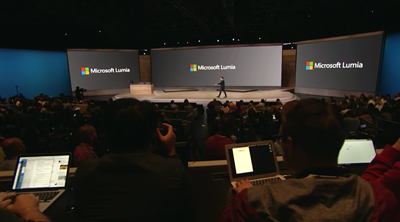 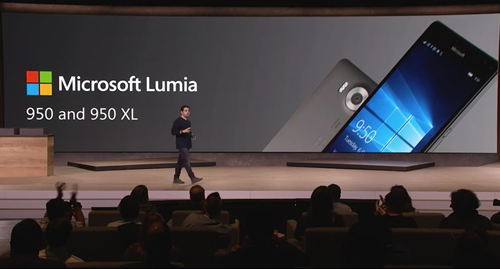 Two antennas in the handsets to get “always on connectivity”. They will give you the best connection they can find. 950 5.2” is a hex core and the 950 5.7” XL is a octo core CPU. Liquid cooling was added from Surface to make these phones as powerful/productive as possible.

He is blowing through the specs – “you guys wrote about this already” and jokes with the media in the room.

He’s pushing the Windows 10 piece of the phones and how it uses the OLED to show info without unlocking the phone. 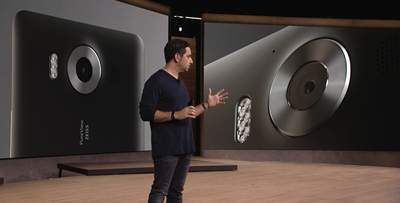 He’s a stickler for the little design details. He pushes the button (natural reflex)- 4K video, which goes straight to the cloud.

32 GB storage with SD expansion up to 256 GB, and it will support 2 TB when it eventually comes out – wow!

The connector is USB type C to support 5 Gbps transfers. In less than 30 minutes you get more than 50% charge – great in the morning when you forgot to charge it and you can get it topped up while getting ready.

All this power and cooling and Windows 10 … the phone is a PC. Office, Skype, OneDrive, Edge, … it’s the same package that you’ll use on your PC. Continuum baby.

Hello is blowing his mind and making some noise. 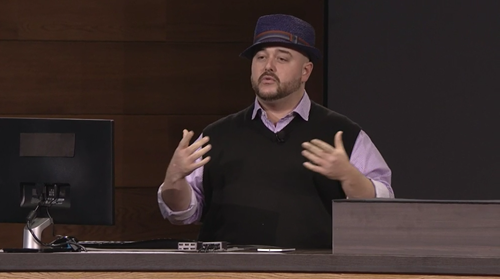 Unlocking the phone: you just look at it – the Hello beta.

The Microsoft Display Port is shown – how you connect the phone to your monitor, keyboard and mouse. 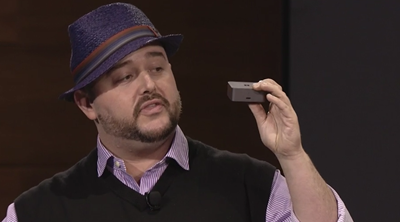 The phone is docked, and the start screen of the phone is the start menu on the desktop. He starts using Office and Outlook, using it with a mouse and keyboard. Welcome to the future. 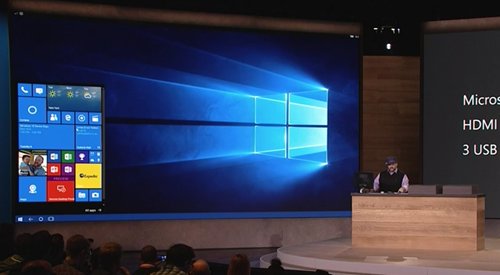 The navigation experience is consistent with the desktop. He app switches, etc. He lifts the phone and he can still do all the phone stuff (texting, etc). Universal apps can scale between screen sizes (phone and monitor).

He does some productivity stuff, like editing a Word doc, copies a table, does Alt-Tab, goes to PowerPoint and pastes a table. It’s the same as the PC, just with the universal app version of Office.

The Display Dock supports removable media such as a USB stick. He inserts one with pictures on it and browses the photos on the monitor via the phone.

He has full audio and 1080p. He plays the Jurassic World trailer on the big screen with surround sound in the theatre. And that’s coming from the phone. 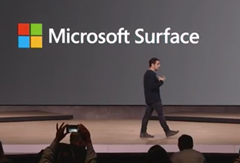 They want to make these the most productive devices on the planet. Surface Pro 3 has grown. We’ve seen this (as distributors to resellers). There’s a video of a small CAD/CAM business using Surface to it’s potential (touch, pen, CPU, mobility).

Do they double down and bring the thunder? Yup. Thunderstruck.

6th generation Intel SkyLake CPU that is 50% faster than the MacBook Air. Up to 16 GB RAM and 1 TB storage. It’s Surface Pro 4. Thinnest Core PC ever shipped. 12.3” diagonal screen (by reducing the size of the bezel so it’s the same size device). 267 PPI screen – 5 million pixels on screen, keeping the screen the best in the biz, IMO. 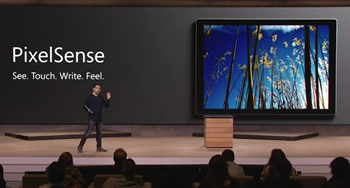 The pen has an eraser on the back. He jokes that there’s a pencil out there without an eraser, sorry Apple! 1024 levels of pressure. 1 year of battery life in the pen – rechargables break the flow of productivity. The pen connects to the Surface via a magnet by the looks of it – no loop required. 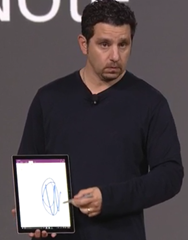 Office & OneNote are integrated. You can quickly launch OneNote and copy content to OneNote using clicks on the pen. An attempted Cortana demo tries to show off the new Microsoft Store in Manhattan – he doesn’t get a spoken result and looks like he was stumped for a second, before recovering.

Inter-changeable pen tips are being introduced. You can select a tip that suits how you work – pencil, ballpoint pen, felt-tip pen, etc. 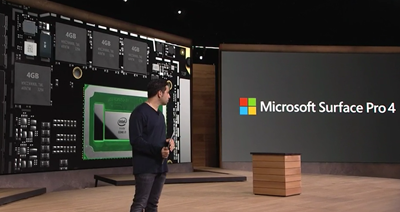 They stopped thinning the device at 8.4mm so there’s still a USB port there! They demo the Surface Pro docking station – it also supports Surface Pro 3. Four USB 3.0 connectors, 2 x 4k display ports, Ethernet. It looks more like a hub, moving away from the big docking station of the past.

There is a new Surface Pro Type Cover. It is lighter, thinner, and stronger. There is a “pro key set” moving away from the older type keyset. This is also compatible with the Surface Pro 3. The touch pad is 40% larger.

On to Windows Hello:

He shows how his kids use Windows Hello on a Surface to get a unique experience for each of them. Parents will love this. There’s a finger print reader on the keyboard. 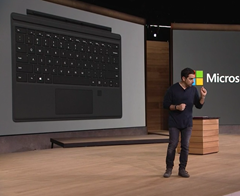 The front facing camera appears to support Windows Hello. The starting price is 899. You can pre-order now and it’s available on October 26th.

“We made the ultimate laptop – we made Surface Book”. 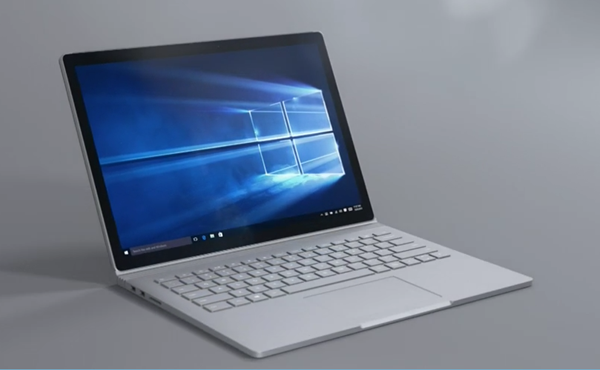 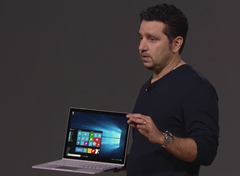 13.5” diagonal screen. 6 mp. 267 DPI. Pixel Sense. It has a pen and touch experience. Optically bonded screen. Top quality visuals. The typing experience was a big deal for them.

He jokes that we laughed about lap-ability. The typing is quiet. 1.6mm of travel – they’re using their 20+ years of keyboard experience. The trackpad is optimised by the Windows 10 team – it’s made of glass. 5 points of touch on the screen.

12 hours of battery. GDDR5 memory. Tuned NVIDIA GForce GPU – tuning via XBox team. This thing “is for the game than plays League of Legends”. This is not a $200 laptop. This is the “fastest 13 inch laptop ever made”. And remember – 12 hours of battery.

How does it compare to a MacBook Pro? It’s 2 times faster than the MacBook Pro. The Surface Dock also works with the Surface Book – one chord (the Surface Connector). He copies 3 GB of data from a drive to the desktop in around 3 seconds. They then show Gears of War playing on the Surface Book – It looks smooth. Some movie editing in Premier Pro – it’s happy doing it with full GPU rendering and no glitches.

They start with a case and machine it to 10s of microns – every Surface is unique because of this manufacturing process. 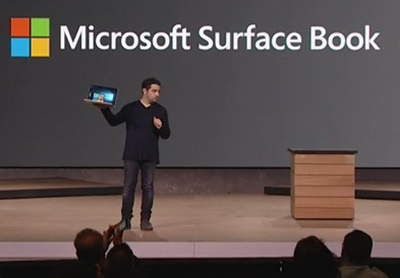 “We are relentless … and we can’t just stop”.

Surface Pro 4 was about bringing the thunder. This product is about reinventing categories. We re-watch the Surface Book video. Ah – the tablet undocks from the keyboard – and can be docked backwards. The Surface Book is a convertible, not a traditional laptop!!!!!

It weights 1.6 Lbs. It is 7.7mm thin. It is modelled on the A4 page for a natural feel. The expandability (USB etc) is in the keyboard. The GPU is in the base.

Muscle Wire is used instead of levers and clicks to lock in the screen. You simply pull off the screen from the base. It’s some sort of clever electrical charge thing. 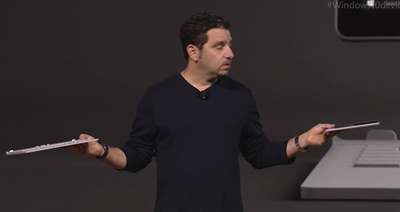 Out comes the CEO.

“We’re making great progress” with the vision they shared in January. This is by far the fastest adoption of a Windows release. A new chapter of Windows 10 is beginning with new devices built for Windows 10 by Microsoft and partners – a new era of more personal computing that focuses on mobility of experience where  you persist, not the device. No single device will be your hub forever – you are the hub so your apps, settings and data need to be mobile with you. This is why they built Windows 10 they way it is, a unified platform for people, developers and IT, on devices from the Raspberry Pi to the HoloLens.

Microsoft is now building the most productive phone on the planet. And lots of caring, and envisioning, and … they should have wrapped up on a demo high IMO.

But overall – this was a very successful launch. I need to get our Surface manager to organise me some *cough* demo stock.