That’s the big quote from Satya Nadella from Build 2015. Various Microsoft developer people spoke for the previous 90 minutes, sending me to sleep. The cheer of the audience in response to “Windows 10” woke me up.

It’s built with everyone in mind

Terry Myerson, Executive VP of Operating Systems, came out to talk Windows 10. It’s build, so he’s speaking to developers, trying to get them to create apps on Windows. They’re targeting more types of devices than ever: PCs, TVs, laptops, IoT, and Hololens. Universal apps will enable devs to code for all of these at once, via one Windows Store. I’m guessing the Windows Store was burned down and rebuilt overnight – I wasn’t able to find the app for Ignite for my phone on it last night – the store promises that apps are “easy to find”. 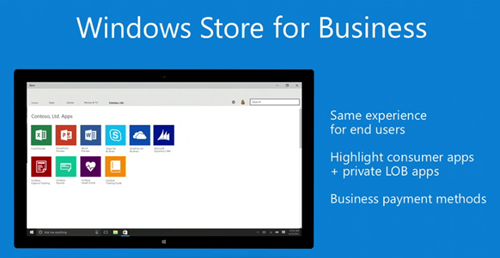 He demo’s a news app – USA Today. He opens an article. The app uses cloud-based shared state. He opens the same app on a phone – and the article is right there where he left it. USA Today spent 1 hour porting the app to Xbox One, tuning it to just present video instead of text + video. That’s universal apps for you.

Interesting: webdevs can take their existing code and package it via Windows Store. Users can “install” the website as an app. The website can detect if it’s running as an app or as a website. One scenario is that the app version can offer embedded sales via Windows Store.

Win32 apps will be available via App-V through the Windows Store. This allows users to get apps that don’t mess up their system – the sw never installs on the PC. Adobe are putting PhotoShop Elements and Premier Elements in the store in this way.

Java and C++ code from Android apps will be able to run on Windows 10. Windows 10 will include an Android subsystem.

And iOS code (Objective C) support are coming to Windows too. Wo-fucking-ow! He demonstrated an iPad app running on Windows! And the game was extended to offer Xbox Live achievements!

The freebie for Build attendees are getting a brand new HP Spectre 2-in-1. Thinner, lighter and more battery life than a Macbook Pro, and has touch. And there’s a joke about conference Wi-Fi.

Mr. Hair comes on stage to do some demos of the Start Menu. Live tiles are animated. The menu is translucent. Jump lists are there. Hmm – the Windows Store is suggesting apps in the menu. The lock screen is updated with “Spotlight” that you can choose to add. You can get a stream of personal information on the screen. If you like the image, there’s a hotspot to train the service which lock screen images you like.

Lots of Cortana talk – which is irrelevant if you’re not living in the privileged small number of countries that it supports.

Other stuff was said about the Continuum adaptive UI.

HoloLens. There is a live demo. There’s a Holographic start menu and he opens Skype. He pins the app to a wall!!!!! There are various other screens and pictures on the wall. THere’s a robot on the table and a virtual puppy on the floor. A weather app on the table is presented in the form of a beach/sea and weather info. He launches a video app to start watching a movie on the wall – instant 200” TV me thinks! He says “follow me” and the video player stays in front of him, he re-pins it to the wall, and scales it to FILL the wall. Every Windows app has these abilities.

Here’s a cadaver anatomy app that they showed live: 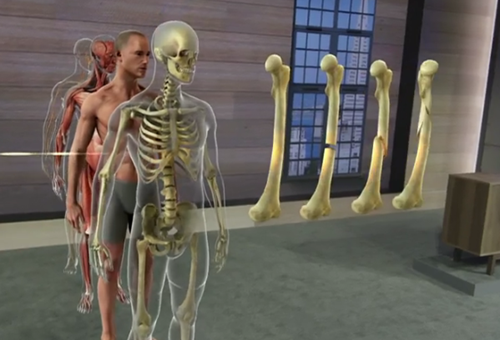 Microsoft have started to learn more ways to use holograms through this device and can’t wait to get the device out in the real world. Note: all the apps shown were universal apps.

The device looks quite nice.

They show a holographic robot overlaid on a physical one that I think was powered by Windows 10 IoT running on Raspberry Pi. The presenter airtaps a path on the floor and the robot follows it. There’s room understanding from the sensors of HoloLens – the robot can be sent around an obstacle.

And back comes Satya to wrap up. That’s all folks!