I’ve been working with Azure IaaS since January of this year. Before that, Azure was meaningless to me; it was a direct sell by Microsoft to developers – yes, even with IaaS there. But then I found out that Azure was coming to Open licensing so partners could resell it, and I started learning. And we at MicroWarehouse started to promote Azure to our customers (the Microsoft partners that resell licensing and implement solutions for their customers) and that’s when I started to get a better feel for what worked in the real world.

Azure Online Backup was the thing that grabbed people’s attention. Who can argue with €0.15/GB/month? That’s less than half of the cheapest discount rate that we found for online backup that is typically sold in Ireland by resellers. However, there were issues.

The biggest one is that there is no centralized portal. Partners use this to manage backups and get reports. That all has to be done on-premises with Azure Online Backup and that increases the cost of operations significantly.

The other hot issue for me is the lack of a backup mechanism for VMs running in Azure. The only offered solution is to install an agent in the guest OS and then we’re back to the bad old days of backup. VM backup should be “select a VM and backup magically happens”, grabbing the files and state that make up the VM. We don’t have that in any way in Azure.

So that’s why I went onto the site to provide feedback and to vote this morning. You should do the same if you have any interest in Azure. Here’s the top vote getters as they are right now: 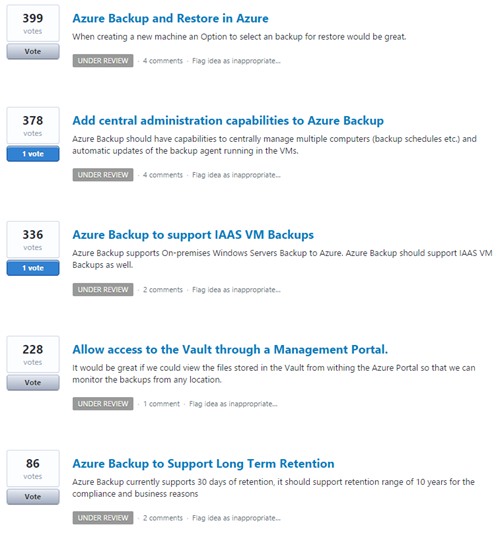