A big pain point with Microsoft’s increased cadence of releases of Windows Server is that upgrading a cluster has been a royal pain in the arse.

Previous to the release of WS2012 R2, there was only one process: build a new cluster (either by buying new hardware or draining a host from the old cluster) and do an out-of-band migration of VMs from the old cluster to the new one. WS2012 R2 decreased the pain slightly by allowing Cross-Version Live Migration – but we let Microsoft know that this wasn’t enough.

Windows Server vNext will allow you to perform a cluster rolling upgrade without creating a new cluster. You will be able to do this from WS2012 R2 to vNext (note I did not say WS2012 or W2008 R2 or W2008).

The process is that you will rebuild each node in the cluster, one at a time with Windows Server vNext. You will, for a short time only, have hosts running WS2012 R2 Hyper-V and vNext Hyper-V in the cluster at the same time. This is called Mixed Mode, and VMs can live migrate between the nodes. Eventually you will complete the project by raising the cluster functional level after all hosts in the cluster are on vNext.

The flow chart of the process is shown here: 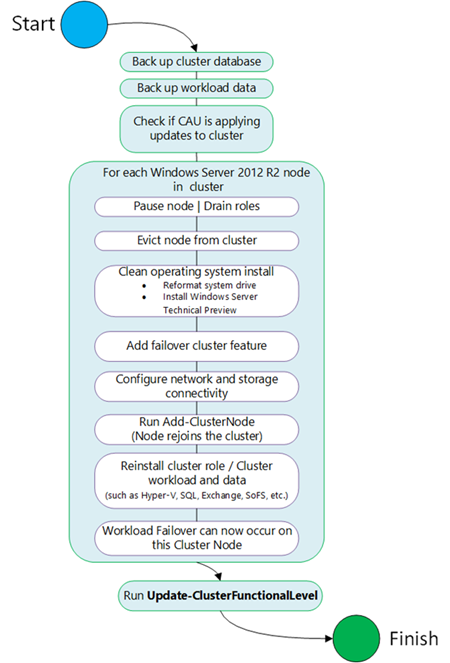 This feature will be a major time and money saver, and will allow Hyper-V customers to keep up with the fast release of new versions of Windows Server Hyper-V.