Myerson is back on stage. Now we get some futures – stuff that is coming but not soon. The next topic is Xbox (television). Universal Windows Applications will be able to run on the Xbox (One I guess). This app can also use Kinect from a single set of source code.

Kinect v2 for Windows is being updated to match the Xbox One. 1080p camera with wide field of view for a much smaller room.

The Xbox graphics platform is coming to DirectX 12 and will now also be on Windows Phone and Windows.

Now onto the next buzzword: the Internet of things. We see an Intel Quark chip (a full x86 system on a chip) which is the size of the nail on your little finger. Basically, it’s a tiny PC. He now logs into a “floor piano” (think Tom Hanks in Big) that is a PC. Belfiore is back to play the piano. We see a live debug of the data stream on the PC/piano.

They also visually present the data on an Azure app.

Now on to Windows. They are not announcing Windows 9. But they are going all-in on the desktop experience. Universal Windows Apps can run in a Window. The Start Menu will be back. 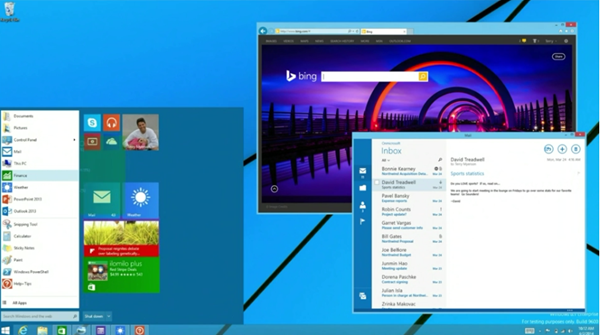 When Windows IoT (Internet of Things) is available it will be available for $0.

Windows is available now for devices smaller than 9” for $0.

Now up, Nokia ex CEO Stephen Elop, the man who will run Micosoft devices. Lumia Windows Phone 8 devices will get better with Windows Phone 8.1. The next generation of Lumias are being announced. I’ll tune out a bit here.

Elop now introduces Satya Nadella, who is dressed comfortably in a t-shirt. He makes the big pitch to developers. He talks about ubiquitous technology and ambient technology and the integration with cloud. 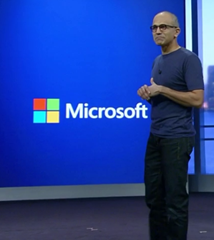 The DPEs previously went out to get questions for Nadella to answer. Let’s see if he deals with the tough ones or not.

Q) Why build for Windows?

A) You want to build for Windows because we are going to innovate. We are not coming at this as the incumbent. We are coming at this from many directions – hardware, services, platform, etc. They will keep pushing. Some USPs by bringing IT pros, devs, and users developers – the magic of the Windows platform. Second big attribute is to create an expanding developer opportunity. Apps can run across all device kinds and in the desktop in the near future. That’s a huge potential market. Don’t forget that there are hundreds of millions of PCs sold every year, and 1.5 billion Windows users out there. And Windows rules the enterprise.

Q) Will apps developed on Windows run on other platforms?

A) His answer suggests he gets this: crazy to abandon code. He talks about the integration with 3rd party libraries (Unity, Xamarin, and more)  for cross-platform coding.

Q) Most are using iPads or Android tablets and not Windows tablets.

A) There are multiple dimensions of competitiveness. Hardware, platform, price, and apps are those dimensions. Partners are producing a range of devices from low- to high-end. MSFT will innovate Surface. A new touch Office is coming. The key competitiveness is “how do users use the tablet in their device family?”. MSFT want to provide developer consistency and user consistency – a USP.

…. and there were more dev focused questions.