Terry Myerson comes out on stage to kick things off, and tells the audience that they are a diverse group. This Build will focus on the delivery of apps and services. He gets things moving quickly.

1.5 billion people use Windows according to a video. 95% of Steam gamers are on Windows.

Joe Belifiore, late of Windows Phone and now Corporate VP of the operating systems group comes out, and praises the devs in the audience. He runs PC, tablet, and phone OS development. There are major updates for Windows:

He goes with what he knows best first: Windows Phone 8.1. A wider range of h/w will run the new OS. The following are working with MSFT and Qualcomm to make handsets: 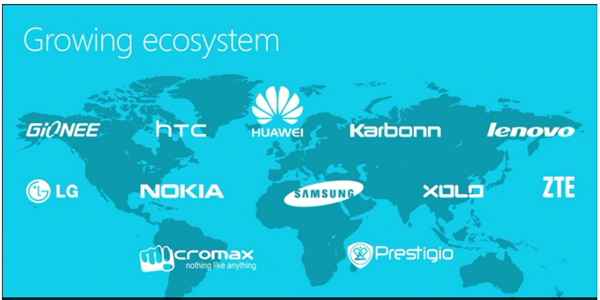 He has Cromax and Prestigio development phones in his hands and shows them off. Next is a demo of WP8.1. They want it to be more personal and tailored to you. There is a new Action Centre:

He mentions that dual SIM is possible!!!! I’d love that – I carry two phones (work and personal) and I’d love to carry just one and be able to turn SIMs off.

The lock screen has changed too. You can change the theme and densities. You can also choose a background photo.

They want the phone to be very personal in a useful way. They have something new, and show "her" come to life. Here comes … Cortana. She is named after the digital assistant in the Halo games. 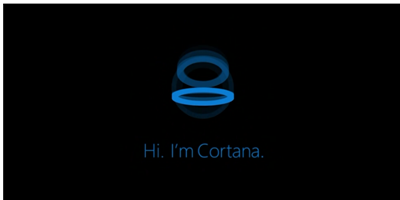 Cortana is powered by Bing. She also learns how you work, who and what you care about. Cortana has a live tile on the Start Screen, bringing her front and centre. She replaces the old search function on Windows Phone. She might suggest searches based on your history (careful now, Ted).

Apparently they talked to real world personal assistants to learn how to do the job well. Personal information was important … they kept it in a notebook. Cortana keeps a notebook so you can control your relationship with her. Your “inner circle” are the people you care about. Cortana will suggest people and learn your relationships. Quiet Hours (YES!) is there too. She can learn places and you can correct/add them.

Oh my! Cortana can be permitted to read your email. She can then recognise things like flight itineraries. That’s very cool. She can remind you that you need to start travelling to the airport. You get all the usual stuff like making appointments and setting alarms.

Bing is demoed by finding locations using Yelp! data. I wonder if this will work outside of the big 7 countries? I know Yelp! has the data, but Bing is limited internationally.

Don’t get too excited Cortana will be launched as a beta. They want to train her to learn accents. Ah – it will be limited to the USA first, then UK, then more countries. Kerry and Glasgow accents could really test a voice recognition service like Cortana! If Cortana is dependent on Bing then it should work in around 7 countries … ever. I’ll stop blogging about Cortana because it’s relevant to a small percentage of the planet.

On to business features in Windows Phone with Nick Hedderman. Stuff is said about things. They talk about enrolling a device, and how email, settings, and other stuff are pushed down. VPN is now added to Windows Phone.

SMIME is added to read/encrypt emails on the phone. Signing is also handled. A cert appears in the email to indicate security.

We see that an MDM (mobile device management) policy has prevented a local save. Apps can be disabled. (I guess this was Windows Intune). The enrolment appears to be a Workplace Join (settings > Workplace).

Belfiore is back. The store has had a much-needed overhaul. It’s now like the Windows 8.1 store. The calendar has been redesigned to give better daily navigation and a weekly view.

Wi-Fi sense will auto-connect to free Wi-Fi networks and automatically accept terms and conditions. Sounds like another USA-only service to me. There’s also a feature to allow friends to access your Wi-Fi network without sharing your password.

Skype and Cortana (yawn!) are integrated into the phone call feature. So you can escalate a phone call to a video call. He demos the new keyboard. Damn, Belfiore is fast at typing on the new wordflow keyboard.

The update will go out to consumers in the “next few months”. Brand new phones will have it in either late April or early May. Sounds like developers in the audience will get it early.