I’ve been pleasantly surprised how well the Lumia 1020 has fared, reviewing it here and on the Petri IT Knowledgebase. How has the phone continued to work over time?

It’s not all been smooth sailing. There are times when there’s an app that I want to use that just is not there. I like to get my news with a sense of humour, and TheJournal.ie does sadly not have a Windows Phone app. That has me reaching for the browser or for my Lenovo Yoga 8 Android tablet where there is an app. I’ve also been doing some travel booking and there’s a distinct shortage of those apps on Windows Phone.

Over the holidays I did quite a bit of driving. And I like to drive safe, so I have a third-party Bluetooth hands free kit (Parrot CTK 3100) with recently upgraded firmware. Strictly speaking, the kit does not support the Lumia 1020, but it does support the 925 and 52x handsets. The experience was working well, but something went wrong over the holiday – I could make/answer calls but the audio failed to go over the kit. I did a little digging and eventually reset the phone. No joy. Then I “reset” the kit by removing all paired phones and that’s when I noticed something: My phone was registered twice, once under the default “Windows Phone” name and again with the unique name I had recently entered in the Windows Phone app. I made sure both entries were gone and I re-paired and tested. Everything was fine once again. Phew – I’d had to resort to using my HTC One for a couple of days so I could drive safely but now I am back on the Lumia 1020.

The real test for this phone was communications, especially on Christmas day. I was celebrating the day with family. My girlfriend was with her family and I have friends scattered all over. Windows Phone was designed from the ground up for social media integration. And that’s what I got … in one app. Facebook, LinkedIn, and Twitter are all added as accounts in the Windows Phone settings. That means I get integrated chat in the Messaging app, not just SMS texting. I was texting and Facebook IMing in one place on the phone. It worked really well, able to stay in contact, and I didn’t have to app switch.

There was some driving to be done too and Nokia’s Here Maps worked perfectly, even correcting me when I encountered a wrong road sign on New Years Eve!

The big feature (figuratively and literally) of the Lumia 1020 is the camera. Christmas means low light and the camera did get used. Microsoft got the physical reference interface of Windows Phone right: the dedicated camera button is so handy. I took photos in low light both with and without flash. Obviously the flash-less photos suffer with motion blur and/or camera shake and some grain, but what the Lumia produces beats what any compact camera might offer in the same circumstances, at least in my experience!

The other thing I’ve been doing is using the phone for music: be it while travelling or doing stuff around the house. The speaker quality is nowhere near what the HTC One offers (which might be best in class, including tablets) so I acquired a Creative (remember them!!!) portable Airwave HD Bluetooth/NFC speaker. Adding music to the phone is a breeze, and adding playlists from Windows Media Player is much easier than it is for Android. Tap the phone, pair, and music is playing via the speaker with volume control on the speaker and one the phone.  Nice! 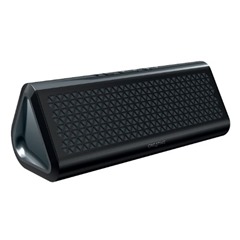 The Creative Airwave HD is available from:

So Windows Phone 8 on the Nokia Lumia 1020 has had a real world, real user test and it’s passed, although there are still questions remaining about app availability.