I thought I’d write a post on how traffic connects and flows in a Windows Server 2012 R2 implementation of Hyper-V with the storage being Hyper-V over SMB 3.0 on a WS2012 R2 Scale-Out File Server (SOFS).  There are a number of pieces involved.  Understanding what is going on will help you in your design, implementation, and potential troubleshooting.

I’ve illustrated a high-level implementation below.  Mirrored Storage Spaces are being used as the back-end storage.  Two LUNs are created on this storage.  A cluster is built from FS1 and FS2, and connected to the shared storage and the 2 LUNs.  Each LUN is added to the cluster and converted to Cluster Shared Volume (CSV).  Thanks to a new feature in WS2012 R2, CSV ownership (the CSV coordinator automatically created and managed role) is automatically load balanced across FS1 and FS2.  Let’s assume, for simplicity, that CSV1 is owned by FS1 and CSV2 is owned by FS2. 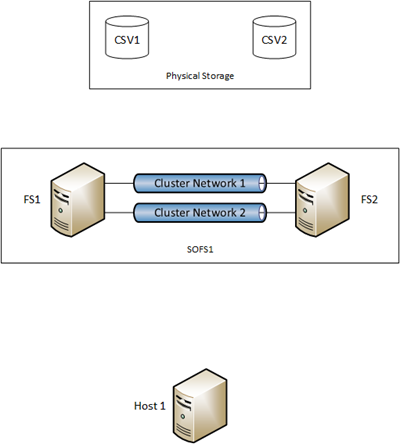 Any number of Hyper-V hosts/clusters can be permitted to use both or either share.  For simplicity, I have illustrated just Host1.

Host1 wants to start up a VM called VM1.  The metadata of VM1 says that it is stored on \SOFS1CSV1-Share.  Host1 will do a DNS lookup for SOFS1 when it performs an initial connection.  This query will return back all of the IP addresses of the nodes FS1 and FS2.

Tip: Make sure that the storage/cluster networks of the SOFS nodes are enabled for client connectivity in Failover Cluster Manager.  You’ll know that this is done because the NICs’ IP addresses will be registered in DNS with additional A records for the SOFS CAP/name.

Typically in this scenario, Host1 will have been given 4-6 addresses for the SOFS role.  It will perform a kind of client based round robin, randomly picking one of the IP addresses for the initial connection.  If that fails, another one will be picked.  This process continues until a connection is made or the process times out.

Now SMB 3.0 kicks in.  The SMB client (host) and the SMB server (SOFS node) will negotiate capabilities such as SMB Multichannel and SMB Direct.

Tip: Configure SMB Multichannel Constraints to control which networks will be used for storage connectivity.

There are two scenarios now.  Host1 wants to use CSV1-Share so the best possible path is to connect to FS1, the owner of the CSV that the share is stored on.  However, the random name resolution process could connect Host1 to FS2.

What does this mean?  Host1 has connected to SOFS1 to access CSV1-Share via FS2.  CSV1-Share is on CSV1.  CSV1 is owned by FS1.  This means that Host1 will connect to FS2, and FS2 will redirect the IO destined to CSV1 (where the share lives) via FS1 (the owner of CSV1). 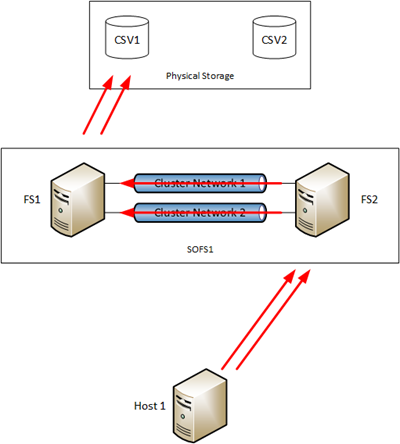 Don’t worry; this is just the initial connection to the share.  This redirected IO will be dealt with in the next step.  And it won’t happen again to Host1 for this share once the next step is done.

Note: if Host1 had randomly connected to FS1 then we would have direct IO and nothing more would need to be done.

You can see why the cluster networks between the SOFS nodes needs to be at least as fast as the storage networks that connect the hosts to the SOFS nodes.  In reality, we’re probably using the same networks, converged to perform both roles, making the most of the investment in 10 GbE, or faster and possibly RDMA.

There is another WS2012 R2 feature that works along-side CSV balancing.  The SMB server, running on each SOFS node, will redirect SMB client (Host1) connections to the owner of the CSV being accessed.  This is only done if the SMB client has connected to a non-owner of a CSV.

After a few moments, the SMB server on FS2 will instruct Host1 that for all traffic to CSV1, Host1 should connect to FS1.  Host1 seamlessly redirects and now the traffic will be direct, ending the redirected IO mode. 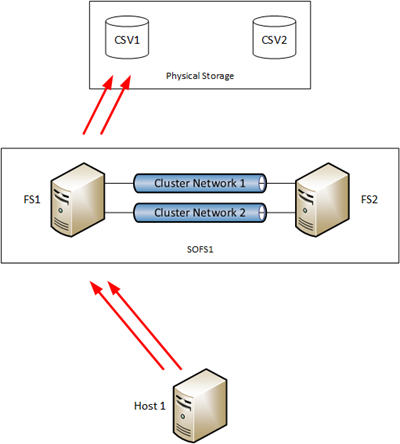 TIP: Have 1 CSV per node in the SOFS.

What if Host1 wants to start up VM2 stored on \SOFS1CSV2-Share?  This share is stored on CSV2 and that CSV is owned by Host1.  Host1 will again connect to the SOFS for this share, and will be redirected to FS2 for all traffic related to that share.  Now Host1 is talking to FS1 for CSV1-Share and to FS2 for CSV2-Share.

TIP: Balance the placement of VMs across your CSVs in the SOFS.  VMM should be doing this for you anyway if you use it.  This will roughly balance connectivity across your SOFS nodes.

And that is how SOFS, SMB 3.0, CSV balancing, and SMB redirection give you the best performance with clustered mirrored Storage Spaces.