I’m building a demo for some upcoming events, blatantly ripping off what Ben Armstrong did at TechEd – copying is the best form of flattery, Ben

It’s absolutely over the top for real world but it gives me demo flexibility, especially to do the following.  In the demo, I have a PowerShell script that will perform a measured Live Migration of a VM with 8 GB RAM (statically assigned).  The VM is a pretty real workload: it’s running WS2012 R2, SQL Server, and VMM 2012 R2.

The script then does:

What I observed in my test runs:

And the time taken for each Live Migration? 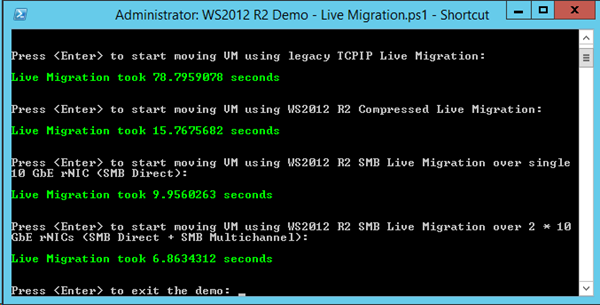 Over 78 seconds to move a running VM over a 1 GbE network without optimizations!  Imagine that scaled out to a host with 250 GB RAM of production VM memory, needing to be drained for preventative maintenance.  That’s over 40 minutes, but it could be longer.  That’s a long time to wait to get critical services off of a host before a hardware warning becomes a host failure.

As the Live Migrations get faster they get closer to the theoretical minimum time.  There are four operations:

The first and last operation cannot be accelerated, generally taking a couple of seconds each.  In fact, the first operation could take longer if you use Virtual Fiber Channel.

This test with with a more common VM with 8 GB RAM.  Remember that I moved a VM with 56 GB RAM in 35 seconds using SMB Direct + Multichannel?  That test was 33 seconds earlier today on the same preview release.  Hmm, I think that hardware would take 2.5 minutes to drain 250 GM RAM of VMs, versus 42 minutes of un-optimised Live Migrations.  I hope the point of this post is clear; if you need dense hosts then: