Why did Microsoft call the “highly file server for application data” the Scale-Out File Server (SOFS)?  The reason might not be obvious unless you have lots of equipment to play with … or you cheat by using WS2012 R2 Hyper-V Shared VHDX as I did on Tuesday afternoon

The SOFS can scale out in 3 dimensions.

Here we have a basic example of a SOFS that you should have seen blogged about over and over.  There are two cluster nodes.  Each node is connected to shared storage.  This can be any form of supported storage in WS2012/R2 Failover Clustering.

1: Scale Out The Storage

The likely bottleneck in the above example is the disk space.  We can scale that out by attaching the cluster nodes to additional storage.  Maybe we have more SANs to abstract behind SMB 3.0?  Maybe we want to add more JBODs to our storage pool, thus increasing capacity and allowing mirrored virtual disks to have JBOD fault tolerance. 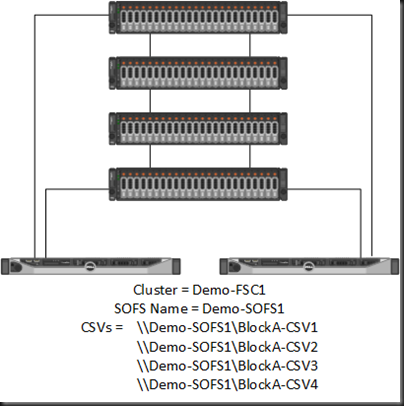 I can provision more disks in the storage, add them to the cluster, and convert them into CSVs for storing the active/active SOFS file shares.

2: Scale Out The Servers

You’re really going to have to have a large environment to do this.  Think of the clustered nodes as SAN controllers.  How often do you see more than 2 controllers in a single SAN?  Yup, not very often (we’re excluding HP P4000 and similar cos it’s weird). 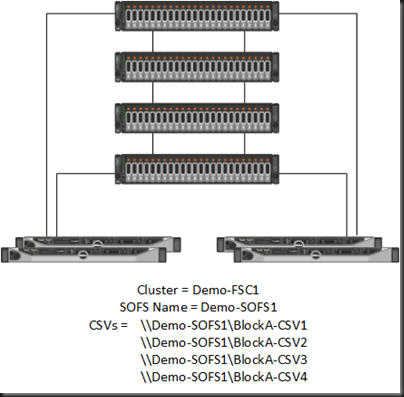 GO back to the previous example.  There you saw a single Failover Cluster with 4 nodes, running the active/active SOFS cluster role.  That’s 2-4 nodes + storage.  Let’s call that a block, named Block A.  We can add more of these blocks … into the same cluster.  Think about that for a moment. 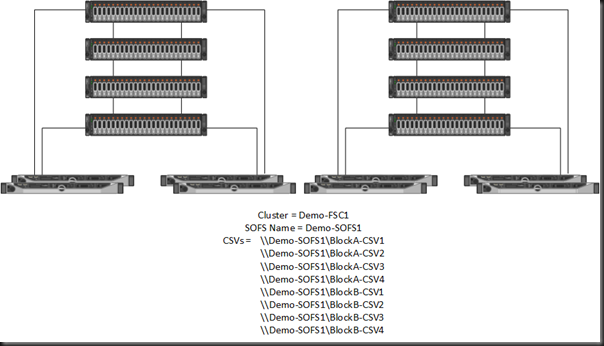 I’ve built it and it’s simple.  Some of you will overthink this … as you are prone to do with SOFS.

What the SOFS does is abstract the fact that we have 2 blocks.  The client servers really don’t know; we just configure them to access a single namespace called \Demo-SOFS1 which is the CAP of the SOFS role.

I don’t have enough machinery to demo/test this so I fired up a bunch of VMs on WS2012 R2 Hyper-V to give it a go:

All 4 VMs are in a single guest cluster.  There are 3 shared VHDX files:

Here are the 4 nodes in the single cluster that make up my logical Blocks A (1 + 2) and B (3 + 4).  There is no “block definition” in the cluster; it’s purely an architectural concept.  I don’t even know if MSFT has a name for it.

Here are the single witness disk and CSVs of each block: 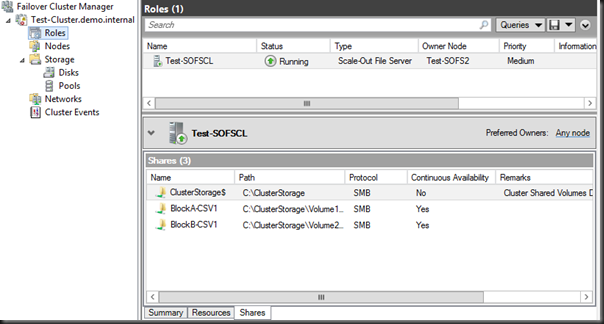 And finally, here is the end result; the shares from both logical blocks in the cluster, residing in the single UNC namespace:

It’s quite a cool solution.