I’ve previously blogged about the Confusion Over Hyper-V and “Snapshots”.  Well, Microsoft listened to the feedback.  A snapshot is now called … a checkpoint.  The benefits of this name change: 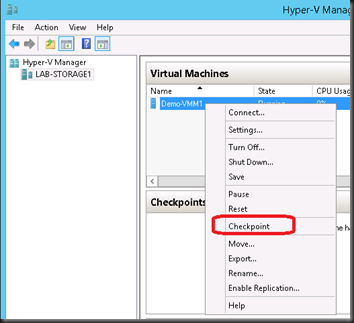 There is a PowerShell cmdlet called Checkpoint-VM to create a checkpoint … the thinking in the Hyper-V team in WS2012 was that you checkpointed a VM.  I can’t say I agreed with that thought process

There are other PowerShell cmdlets too:

They still use the term “snapshot”.  I don’t know if that will be changed or aliases will be used (for script backwards compatibility).  I hope something is done to keep things consistent but I doubt there’s much time left for anything to be done in the R2 release.

2 Replies to “A Snapshot Is Now A Checkpoint”